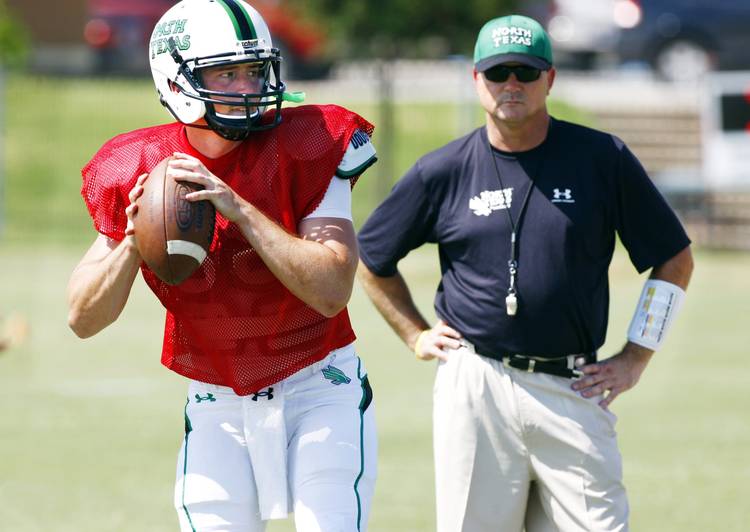 Former North Texas football coach Todd Dodge, right, looks on as starting quarterback and son Riley Dodge throws during practice during a 2009 practice in Denton. Todd Dodge is now the coach at Westlake, and Riley Dodge is an assistant at Flower Mound Marcus. (The Dallas Morning News, John F. Rhodes)

FLOWER MOUND — Granted, he’s only 28 right now, but there will come a day when some superintendent somewhere takes a chance on hiring Riley Dodge to become a high school head coach.

Leaning back into a chair inside the Flower Mound Marcus fieldhouse, Dodge looks quite comfortable having gone into the family business.

“He’s what you would expect of a guy who’s been around the game his whole life,” Marcus coach Gerry Stanford said. “Down to Earth, salt-of-the-Earth type of coach.”

Sure, Dodge could have gone after another college job. But if Dodge is anything like his father — Westlake coach Todd Dodge — the odds are Riley can achieve star status much faster at the high school level. For the moment, that suits him just fine.

“Getting to deal with 15- to 18-year old kids is more my wheelhouse,” Riley Dodge said, “and I feel I can have an impact.”

Dodge sold the UT coaches on the 6-foot, 5-inch pass rusher. Then he also talked up the Longhorns to Fitzgerald. As someone who worked under Mack Brown and Charlie Strong, Dodge saw various management styles.

“He knows truly who they are, and he told me the truth about all of them,” Fitzgerald said. “It’s just good to know a person who’s been there and done that.”

Dodge has done quite a bit already, both as a player and a young coach unwilling to lean solely on the family name.

At Southlake Carroll, he threw a school-record 101 touchdown passes and led the Dragons to a 27-2 record as a starter. Dodge originally committed to Texas, but then switched to North Texas after his father got the head coaching job with the Mean Green in 2007.

After his playing career ended, Dodge spent two seasons as a graduate assistant at Texas A&M and then UT. Who knows what lies ahead for an up-and-coming assistant with his entire professional career ahead of him.

“I would like to be a head coach in high school,” Dodge said. “That’s kind of my ballpark and what I enjoy.”

A pair of five-star prospects to attend Texas’ junior day