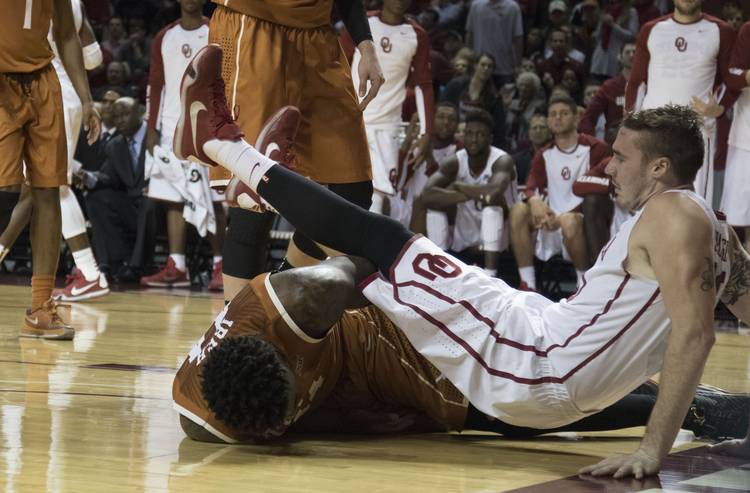 Oklahoma forward Ryan Spangler falls on and fouls Texas' Prince Ibeh during the second half of a NCAA college basketball game at the Lloyd Noble Center on February 8, 2016 in Norman, Okla. Oklahoma won 63-60. (Photo by J Pat Carter/Getty Images)

All-Big 12 ballots have gone out, and it’s time to vote for player of the year.

“Buddy’s making a strong case,” Texas guard Isaiah Taylor said. “Who would I vote for? Hey, me being selfish, I’m voting for myself.”

Make no mistake, Taylor said he has incredible respect for Iowa State’s Georges Niang and Kansas’ Perry Ellis. But Oklahoma’s star guard Buddy Hield may already have a lock on the league’s top honor a second straight year.

Hield’s 3-pointer with 1.4 seconds left against the Longhorns in Norman is one of many top-notch personal highlights in a year where he’s the runaway scoring champ (25.1).

Now, the third-ranked Sooners come to Austin on Saturday to face a sold-out Erwin Center crowd as the regular season nears its crescendo. OU is angling for a No. 1 seed in the upcoming NCAA Tournament while Texas (18-10, 9-6 Big 12) is projected anywhere in the 4 to 6 range.

Related coverage: Men’s preview: No. 25 Texas vs. No. 3 Oklahoma

“Given their activity in practice the last couple days, I really like where we’re at,” OU coach Lon Kruger said.

After facing OU, No. 25 Texas turns around two days later and hosts Kansas, which could be ranked No. 1 by tipoff. It’s the first time in school history the Horns have played two top-five teams in back-to-back home games.

So yes, this is a big moment for Texas, which can realistically still finish anywhere from second to seventh in the Big 12 race. After these two home games, the Longhorns close out the regular season next Friday at Oklahoma State.

“Beating OU means a lot,” senior Demarcus Holland said. “They’ve been beating us the last couple times we’ve played them. They don’t respect us, I don’t feel. I wouldn’t blame them. They beat us the majority of the times they played us. That’s on us.

Last weekend’s embarrassment against Baylor was eerily reminiscent of the 70-49 home loss to OU last season. The Horns started with multiple turnovers, never got in sync and got blasted by the Bears, 78-64.

A real sign of Texas’ resilience came last Monday at Kansas State. In a game that had loss written all over it, Taylor drilled a 3-pointer in the final minute, hit two free throws and grabbed the final rebound to secure a one-point victory.

“We have to put our best foot forward, because our last time at home, we didn’t do that at all,” guard Javan Felix said. “We owe it to our fans to put a better showing out on the floor also.”

The key against the Sooners is tight perimeter defense. With Hield leading the way, OU ranks second nationally in 3-point shooting percentage (.431).

On Feb. 2 at Lloyd Noble Center, the Longhorns switched on ball screens, which sometimes left Prince Ibeh (6-11) on the perimeter guarding Isaiah Cousins (43.5 percent from 3-point range). That strategy worked, as OU made just 9 of 22 shots from long-range. Well, it worked up until OU’s final possession, when Hield hit the game-winner over Kendal Yancy.

The most demoralizing statistic from that loss? Texas led for 34 minutes, 57 seconds. OU led for only 49 seconds, by comparison.

“We don’t want him to blow by anybody and get easy 3s in transition,” Taylor said of Hield. “That’s where he gets a lot of his points, easy threes in transition. You’ve got to find him in transition, especially with Cousins and (Jordan) Woodard pushing the ball.”

Holland said the Longhorns simply focus on playing good defense, “the ball will find its way into the basket.” But a rowdy home crowd would help, too.

“Don’t tiptoe and let them come into our house and take over,” Holland said.