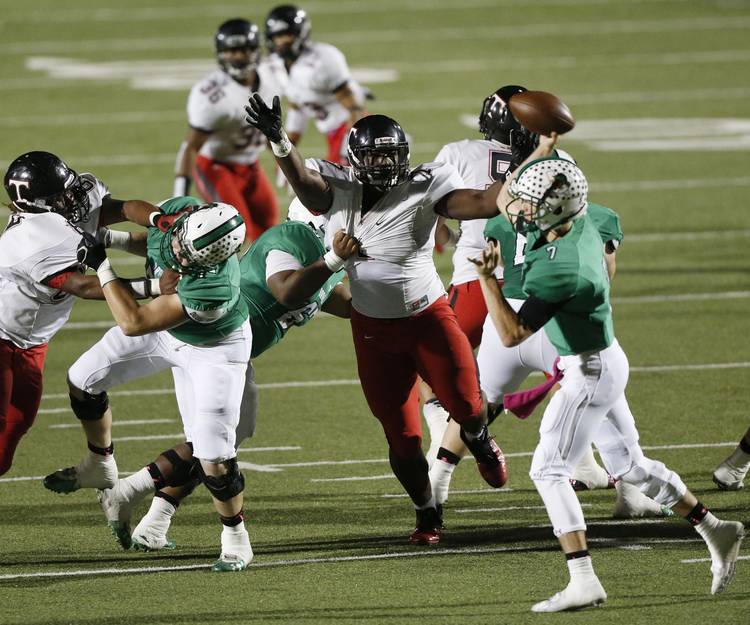 EULESS — Chances are good Texas signee Chris Daniels will be plopped on his couch Sunday night watching the Oscars. If he sticks to the script, Daniels will be on the red carpet himself someday, too.

Daniels is physically imposing, a 6-foot, 4-inch, 328-pound chiseled man who should find his way onto the field this fall, possibly against Notre Dame in the season opener. But his gregarious personality is the real steal here for the Longhorns.

Trinity drama director Kendal Fries said she usually doesn’t put the class clowns on the stage because they simply want attention. Not Daniels, though. Trinity just finished its second trimester, and for his final project, Daniels wrote a murder mystery titled “Scream In the Kitchen.”

The script involves a complicated marriage mixed with a dash of whodunit. Daniels, like all decent writers, properly develops his characters leading up to the third act.

“His had a really cool plot twist to it,” Fries said. “When he’s on stage, he has such a presence, just like he does on the field. You notice him. On stage, he looks even bigger.”

If Daniels could rewrite the script, he’d turn back the clock one year when Trinity staged the musical “Grease.”

“I’ll stretch out that leather jacket,” Daniels said while rolling his hulking shoulders. “I’ll be the first in Trinity history — the black Danny Zuko.”

Acting is literally in Daniels’ blood. In one of those only-in-Hollywood tales, Daniels was born to a pair of 17-year-old parents, Latosha and Chris Daniels Sr. While mom was in the hospital, dad was performing in a one-act play that same day at the local high school. “After the play, I went to the hospital in Little Rock,” Chris Daniels Sr. said.

When Chris Jr. was 7, he was already one of the biggest kids around. Daniels has always been a ham. Getting him onto the football field was an entirely different drama.

The family had moved to Muskegon, Mich., but Daniels was scared of being hit.

“So we went out in the backyard, and I had him put on all the pads,” Daniels’ father said. “I hit him with the helmet, and said, ‘Does that hurt?’ He said, ‘Hell no!’ ‘So why you running from all that contact?’

“I doubt a mom would’ve taken her baby in the backyard and did that,” Chris Sr. added. “But it seems that it changed his life as far as football’s concerned.”

The Great Recession drove the Daniels family out of Michigan and back south. They landed in San Antonio for a stretch and then moved to Euless prior to Chris Jr.’s sophomore year.

As a junior, Daniels found himself lined up in practice against Patrick Vahe, a future freshman All-American offensive guard at UT. Daniels fielded offers from multiple schools, but for whatever reason didn’t get a scholarship offer from Texas.

Just when Daniels was ready to commit to Oklahoma last December, he finally got the call from Longhorns coach Charlie Strong.

“He got on the phone and said, ‘Go ahead and commit tomorrow, but I guarantee you’re coming to Texas,’” Daniels said. The next day, Daniels did exactly that. He committed to OU, but also got an offer from UT. “It kind of stopped me in my tracks,” he said.

Asked about UT’s better-late-than-never approach, Trinity defensive line coach Donald Tryon said, “It’s different, there’s no doubt. You really believe in your program and what you have to offer. That says something about what they’re trying to do in Austin.”

Strong made an in-home visit on Jan. 27, and both Daniels and the coach dabbed for a photograph that rocketed around the Internet.

Assistant coach Brian Jean-Mary told the family he’d never had Arkansas-style pulled pork sandwiches, where the coleslaw goes between the buns with the meat.

“My momma threw it down in the kitchen that day,” Daniels said. “With other coaches, she was just like, ‘Here.’ But she put time and effort into making that.”

Daniels isn’t afraid of getting hurt on the field anymore. He is fearful of not making a close friend proud.

During his time in Michigan, Daniels became close friends with Elishua Pinegar, a boy four years older from nearby Muskegon Heights.

“He was the main reason why I started playing football,” Daniels said. “I thought, ‘Man, I’m going to be just like you.’ He used to be in the backyard playing with me, trying to get me better.”

Pinegar was 21 when he was shot in the shoulder while standing on a street corner around 12:20 in the morning in April 2015, according to Muskegon Heights police. Prosecutors admit that Pinegar was an innocent bystander to a marijuana deal gone bad, according to reports published by the website MLive.com.

When the American-Statesman called the Muskegon Heights police department to inquire about the case, a woman in the records department asked the victim’s name. “We have a lot of shootings, so you’re gonna have to give me more than that,” she said.

Daniels said he skipped his junior prom to attend Pinegar’s funeral back in Michigan.

“God, family and football. In that order,” Daniels said.

Whether Chris Daniels Jr. reaches the NFL or fulfills his dream of becoming the next footballer-turned-actor like Terry Crews, Chris Sr. is extremely proud.

“He doesn’t want to disappoint you,” Chris Daniels Sr. said. “He’s not a knucklehead. Every now and then, I want to choke the hell out of him. but that’s any teenager. I’m a little bias, but he turned out alright.”

Pitching strong but bats lifeless in 12-inning loss to Stanford