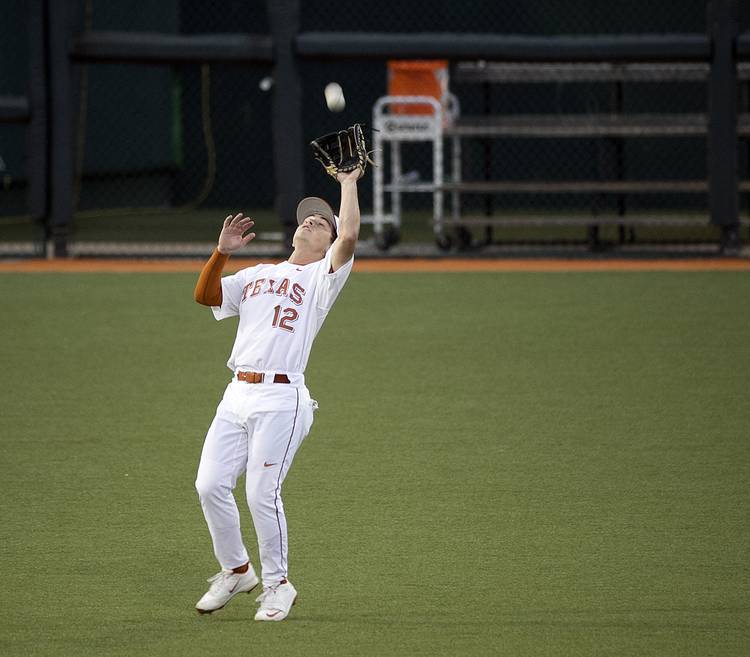 To open this four-game series, a couple of old coaches started a couple of young pitchers, and by the time it was over it past past all of their bedtimes.

For the second time through four early-season games, Texas came up on the losing end of a 12-inning affair, falling 1-0 to Stanford on Thursday. It took 3 hours, 51 minutes to finish, at which time everyone had forgotten about the impressive starting debuts for freshmen pitchers Nolan Kingham (Texas) and Kris Bubic (Stanford).

“Haven’t we done this before?” Texas coach Augie Garrido said, referencing a 12-inning loss to UNLV in last Friday’s season-opener.

Garrido, college baseball’s winningest coach, fell to 32-28-2 against Stanford’s Mark Marquess, who ranks third. Their teams will meet three more times before Stanford returns to the west coast, and Garrido will be hoping his squad can get something — anything — going offensively after striking out 18 times and failing to get a hit the 13 times a runner reached base.

Bubic, a soft-tossing left-hander, had the Horns in a stupor early, relying on a tricky change-up to record seven strikeouts in 4 1/3 innings. Once he left, Colton Hock (eight strikeouts) came in with a devastating curve ball and fanned Zane Gurwitz to strand a runner at third in the fifth.

Compounding UT’s offensive woes is the possibility it could be without one of its top hitters going forward. Patrick Mathis, who homered twice against UNLV, came up limping with a pulled hamstring after running out a pop fly in the third inning and had to leave. Garrido said he doesn’t know the severity of Mathis’ injury.

Yet, the night wasn’t a complete waste as Kingham and fellow freshmen Blake Wellmann and Chase Shugart mowed through Stanford’s lineup and accounted for 26 of 27 regulation outs. If the first two weeks are any indication, UT’s rookie arms could add to an already loaded pitching staff.

“I think the pitchers really did well, and that’s a great sign,” Garrido said.

The loss went to veteran Jon Malmin, whose throwing error to first and intentional walk in the 12th loaded the bases for a RBI groundout by Mikey Diekroger. UT tried to turn a double play, but second baseman Joe Baker couldn’t get the ball out of his glove to finish the sequence. Chances are he wouldn’t have gotten it there in time, anyway.

Kingham found out he was starting at Wednesday’s practice when Josh Sawyer, who was scheduled to take the mound for the opener, complained of shoulder pain. Garrido said Sawyer’s injury hasn’t been “accurately diagnosed,” so there’s no telling if or when he will return. So it looks like for the time being Kingham will slide into the fourth spot in the rotation, and after one try, the hurler from Las Vegas looks like he belongs. He walked three in 4 2/3 innings, but didn’t give up a hit until surrendering a couple of singles in the fifth. He stayed out of real trouble by forcing 10 groundball outs.

To end the first, Kingham induced a 6-4-3 double play even though it looked like both Stanford runners were safe. The next inning, Kingham got some glove on a shot up the middle and slowed its momentum to prevent a runner from scoring from second. He followed a 30-pitch third with an eight-pitch fourth. His fastball, which began the night at 89 miles per hour, heated up to 93 or 94.

“It was everything I’ve dreamed of,” Kingham said. “It was awesome.”

Kingham was replaced by Travis Duke, who got the final out in the fifth before giving way to Wellmann (3 innings, one hit). Shugart worked the ninth and recorded the first two outs of the 10th before Malmin took over.

Offensively, Texas squandered several late-game chances. Bret Boswell struck out for the third time with two on in the ninth. In the 10th, pinch-hitter Ben Kennedy went down swinging and left ‘em loaded. To start the 12th, Tyler Rand took a called third strike on a full-count on a ball thrown at his ankles.

To beat zones, you’ve got to make outside shots; therein lies UT’s problem …