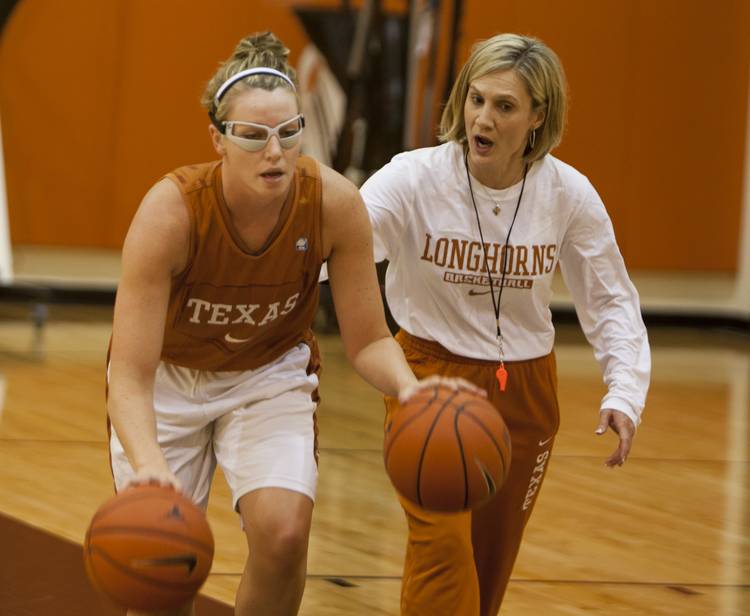 The memories are cherished. They evoke smiles and laughs and sometimes tears.

But soon there won’t be any more time to make more precious moments or priceless memories for these Texas women. Saturday’s final home game against TCU (15-12, 7-9) marks senior night for No. 8 Texas (25-2, 14-2), a night to celebrate and honor the four seniors.

For Imani Boyette, Brady Sanders, Celina Rodrigo and Empress Davenport, their time at Texas is almost up and the clock is ticking.

Boyette, Rodrigo and Davenport arrived at Texas the same time as Aston, joining Sanders, who’s a fifth-year senior. But even though Sanders wasn’t part of Aston’s first recruiting class, she’s played all four years under her after missing her freshman season with a medical redshirt.

Senior nights are always emotional because of the pre-game ceremony honoring the seniors and the knowledge that it’s the last time they’ll play in front of their home crowd. But this class is different. This is Aston’s first recruiting class to graduate. She’s seen them evolve over time.

“It’s always bittersweet,” Aston said Friday. “But you do like to take the time to appreciate the young ones that grow into women.”

There are certainly hundreds, if not thousands, of other memories those four seniors have gathered since they began playing for Aston in 2012.

Boyette laughs and smiles from ear to ear while reciting her favorite memory of her coach.

“When she was re-recruiting me, she came to Compton, California and sat in an all-black church and participated in a Baptist service — the only white woman there,” Boyette said. “It was wonderful.”

“You don’t look at her and think she has rhythm,” Sanders said with a toothy smile. “But then she just really confirmed that she has no rhythm. It was hilarious.”

“Imani grabbed her,” Rodrigo said, “and just picked her up.”

Boyette lifted Aston, just like these seniors and their head coach have been able to lift up the basketball program again. They went 12-18 in Aston’s first season, then improved to 22-12 the next year and made it to the second round of the NCAA Tournament. They were 24-11 last year and made it to the Sweet 16, and as seniors they guided the program to its historic 1,000th win. They’re aiming for the Final Four.

Their legacy will be more than games won, conference championships claimed and NCAA tournament appearances. When asked what they hope to leave behind for the underclassmen, Boyette pointed to her ring finger.

But a legacy transcends a ring count. It also refers to the impact on those left behind. How to work hard, how to persevere, how to have fun, how the get the most out of every last second until the clock runs out.

“Their journey and part of their ambition this year was to try to win a championship,” Aston said. “They wanted to leave a legacy here.”