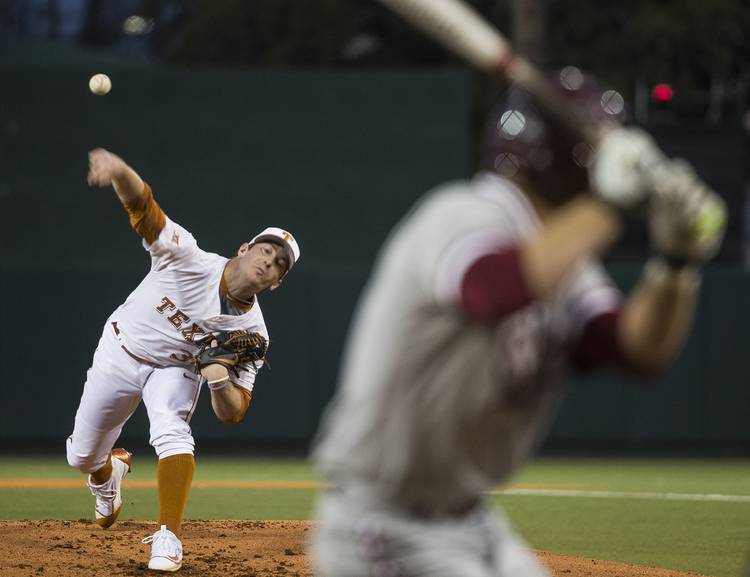 Texas's Kyle Johnston throws against Standford in the bottom of the 5th inning during the NCAA men's college baseball game at the UFCU Disch-Falk Field in Austin,Tex., Friday, Feb. 26, 2016. RICARDO B. BRAZZIELL/AMERICAN-STATESMAN

After his final pitch in the seventh inning, Kyle Johnston walked off the field mentally excited and visibly animated. His adrenaline was flowing. He pounded his right hand into his left glove several times.

That action itself could have served as a metaphor — Johnson pounded the glove the way he pounded the strike zone Friday night. He bisected the plate with his fastball and fooled hitters with his breaking balls. Johnston pitched seven innings, allowing two runs on four hits and struck out nine batters in Texas’ 4-3 win over Stanford.

“Kyle was the story,” Longhorns coach Augie Garrido said. “He provided the leadership by going out there and maintaining control of what he was doing, and when one person does, it becomes contagious in this game.”

Garrido inserted freshman Chase Shugart to halt the mini-rally. Stanford countered Garrido’s move by sending freshman Duke Kinamon to pinch hit; Shugart forced Kinamon to ground out to shortstop. Shugart intentionally walked the next batter to load the bases with two outs. He then got Austin Barr to ground out to third.

Garrido brought Shugart in because he had pitched twice before. He’s also what Garrido calls a wild card.

“We’re going to bring them in because we think they can pitch with runners on base,” Garrido said.

In Thursday’s series opener, the Horns were able to get runners on base against a freshman starter, but couldn’t muster a run in 12 innings. On Friday, facing another freshman starter — Tristan Beck — they plated four runs in the third inning.

It started with a Kacy Clemens walk. Then Beck drilled Tyler Rand in the left hand. Zane Gurwitz grounded to third, but Stanford third baseman Mikey Diekroeger’s throw to first was a bit too wide and was dropped by first baseman Matt Winaker.

Bret Boswell followed by bringing in Rand on an RBI groundout. Joe Baker and Tres Barrera brought in the next two runs with back-to-back hits.

The Cardinal got a run back in the top of the fourth when Rand misplayed a base hit by Quinn Brodey; the ball rolled all the way to the wall. Brodey was later brought it on a groundout by Hoerner.

After the inning, Rand was replaced by freshman Brady Harlan. Garrido said Rand probably hadn’t broken his hand, but also that he likely would miss the rest of the series.

If so, Rand would be the second Longhorns outfielder to have been lost this series; sophomore Patrick Mathis has a mild hamstring strain and will probably be out “a couple weeks at the most,” Garrido said.

Aside from the injury, Garrido liked that the Horns remained aggressive.

“We did a good job of continuing to attack,” Garrido said. “From the fourth inning to the eighth inning, we had runners in scoring position in every inning.”

While Texas attacked on offense, Johnston kept attacking Stanford on the mound. He was in a rhythm all night and didn’t let the Cardinal establish one. He would offset his mid-90s fastball with a knee-melting breaking ball.

He did that for seven innings while tossing 104 pitches.

“I thought that if I kept throwing first-pitch strikes, getting people out quick, I could go as long as I wanted to,” Johnston said.

The Horns played better than they did in Thursday night’s loss, but Friday was by no means a great performance. They committed two errors and they left nine men on base.

“There were some pretty crappy at-bats,” Garrido said.

But it’s early in the season, and the Horns were able to bounce back from a miserable showing the night before.

“It was,” Garrido said. “an imperfect game.”