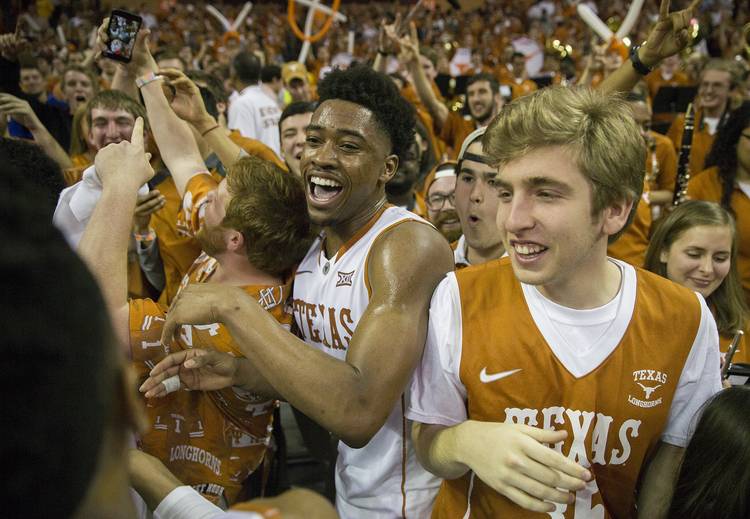 By his own admission, Shaka Smart has an introverted personality.

That sounds contradictory to the rigors of his chosen profession. The Texas basketball coach is an intellectual sort. He’s not adept at dispensing hyperbolic commentary.

It looked as if Smart would have to eat those words midway through the second half. But the 25th-ranked Longhorns unleashed an eye-popping 22-0 run during the final seven minutes as a full house reached deafening levels in what became a 76-63 win.

“I’ve learned in coaching that you’ve got to be outgoing when the time requires it,” Smart said. “Mack Brown had texted me this morning at 7:55 that OU still sucks.”

Several Texas players praised the 16,540 fans inside the Erwin Center for the dynamic atmosphere. “There was one time I heard the crowd louder than it’s ever been,” senior Connor Lammert said. They practically begged fans to come back for Monday’s regular-season home finale against No. 2 Kansas.

About 1,000 tickets remain for the 8 p.m. tipoff. It’s likely the Jayhawks will come into the game ranked No. 1 when the polls get updated Monday. The Horns are 0-8 all-time against the nation’s No. 1 team.

But anyone who thought the Horns (19-10, 10-6 Big 12) would be giddy after beating the Sooners might be disappointed. This club now has four wins against top-10 teams this season, the most in Division I.

“Our guys were excited down the stretch; don’t let them fool you,” Smart said.

Five UT players finished in double figures with Taylor’s 18 points leading the way. Lammert (14 points) was 4 for 7 from 3-point range. Prince Ibeh had 10 rebounds as Texas crushed OU on the boards 43-31. It was the Horns’ first home win over the archrival Sooners since 2013.

Buddy Hield, OU’s superstar and the likely Big 12 player of the year, had a game-high 33 points. He showed no hesitancy to shoot over 6-foot-8 Shaq Cleare twice — or anyone else, really. Jordan Woodard added 15 points, but only three other players scored for OU.

Credit Ibeh for igniting the crowd with a monster block on Isaiah Cousins with 16 minutes, 9 seconds left in the second half. Ibeh sort of glared at the OU bench, too. “That was a great block,” Eric Davis said. “I was pretty excited myself, but we didn’t need a (technical) at that moment.”

Once the Horns started double-teaming Hield, the Sooners (22-6, 10-6) sputtered. Taylor’s two free throws gave UT a 59-58 lead with 4:28 remaining, and from there, Texas went into hyperdrive.

Ibeh scored on a magnificent tip-in, and Javan Felix followed with a driving layup. Taylor unleashed a desperation heave just before the shot clock expired, and Texas caught a break. The loose ball found its way to Felix, who got to the free-throw line and scored again.

Told that Texas went on a 22-0 run, Hield said, “I didn’t know that even happened. That’s basketball sometimes. It’s funny like that.”

Kerwin Roach got two free throws, Taylor scored on a driving layup, Felix made two more free throws, and Roach threw down a two-handed dunk. Hield’s 3-pointer with 37 seconds left was too little, too late. The Horns closed the game on a 25-5 run.

At this point, it’s hard to say which signature win is Smart’s biggest. Was it No. 3 North Carolina? Twice beating top-10 foe West Virginia? Or was it No. 3 Oklahoma?

“We’ve beaten good teams before,” Taylor said with a shrug. “It’s nothing new for us.”

Coffee is for starters: Ty Culbreth fans 12 in 9-0 win