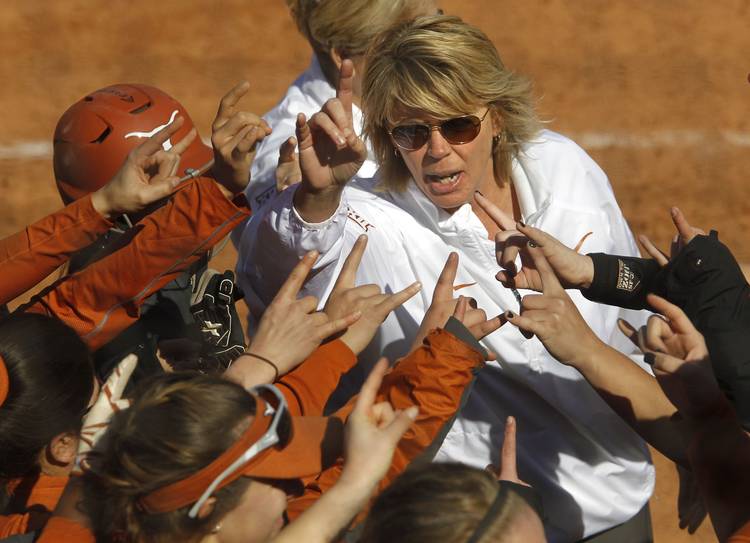 Texas' head coach Connie Clark speaks with her team during the Texas Invitational softball tournament at McCombs Field, Friday, Feb. 26, 2016. Clark made some lineup changes after losing to Tulsa a second time on Saturday. (Stephen Spillman / for American-Statesman)

Texas softball coach Connie Clark hit the reset button Saturday between games of a doubleheader after the Longhorns continued to struggle at the plate in a 3-0 loss to Tulsa.

It proved to be effective as Stephens broke out of her slump, lifting Texas (13-2) to an 8-1 win over Illinois in the Longhorns’ second game at McCombs Field in the Texas Invitational. She went 3 for 4 with two doubles and two RBIs after being 1 for 8 in the three previous games.

The top of Texas’ batting order — Stephens, Tunning and Stephanie Wong — went a combined 4 for 21 in the three games leading up to Illinois.

“We knew we were seeing the ball, we knew were hitting it, but it wasn’t translating to hits. We knew eventually the softball gods were going to answer,” Stephens said. “After you get those first couple of hits, you let out a sigh of relief.”

Clark and the Longhorns let out a big sigh of relief as their 10 hits against Illinois were more than they had combined in two losses to Tulsa and a 3-2 win over Abilene Christian.

In Saturday’s loss to Tulsa, Texas got singles from junior Taylor McAllister and Celina Felix, but that was all Golden Hurricane pitcher Caitlin Sill allowed.

Wong continued to struggle at the plate against Illinois, going 0 for 2. The junior from Westlake High School is 2 for 7 in her last four games.

Stephens, Felix and pinch hitter Holly Kern, however, were a collective 6 for 10 at the top of the order. Felix was 2 for 4 with two runs scored and an RBI.

“When we have standards we are committing to, we have to commit to them all the time,” Clark said. “Hopefully, we grew a lot today and realizing that it’s important about how we go about business with our body language, competing and all of those things we can control.”

Illinois scored its lone run in the third inning. Allie Bauch’s single to right field  plated Kylie Johnson, who had advanced to third on an error by second baseman Stephanie Ceo.

Texas answered in the bottom of the inning with two runs. Felix scored Stephens with a single to center field and Taylor McAllister hit an RBI double to score Felix and give Texas a 2-1 lead.

The Longhorns added a run in the fourth inning on an RBI double by Stephens and then exploded for five runs in the sixth.

Pitcher Tiarra Davis had another strong performance in the circle, striking out seven batters and giving up two hits and no earned runs. Davis improved to 8-1 on the season.

Sophomore Paige von Sprecken took the loss in the circle against Tulsa. She gave up 11 hits and three runs in her first loss of the season.

The Longhorns will close the Texas Invitational at 10 a.m. Sunday against Weber State.