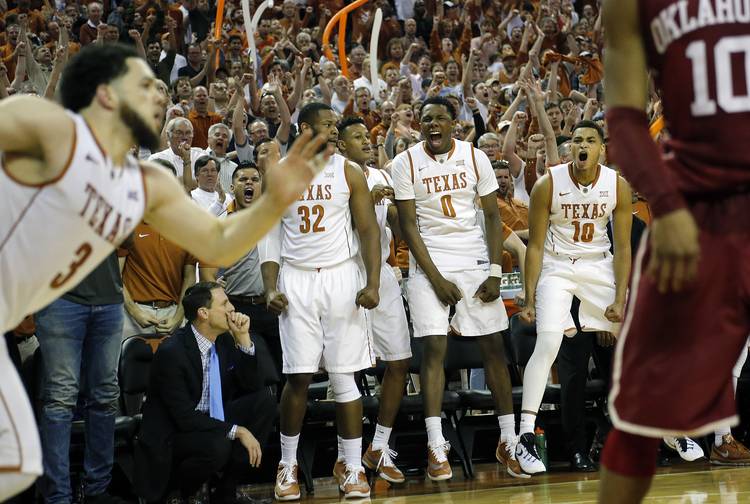 From left to right, Shaq Cleare, Tevin Mack and Eric Davis of the Texas Longhorns all react as they defeat the Oklahoma Sooners at the Frank Erwin Center on February 27, 2016 in Austin, Texas. (Photo by Chris Covatta/Getty Images)

After beating No. 3 Oklahoma, Texas guard Javan Felix was asked if he’d like to see UT fans storm the court. “No, we don’t need that,” he said.

The uber-confident guard truly believes the Horns are unbeatable at the moment. That feeling could prove useful Monday night against Kansas, which clinched a share of its 12th straight Big 12 title over the weekend.

Six Texas seniors will be honored before the game at 7:40 p.m. Tipoff is scheduled for 8 p.m. on ESPN’s “Big Monday” national broadcast.

The Jayhawks (25-4, 13-3 Big 12) are currently ranked second in the Associated Press Top 25 poll. When the poll is updated midday Monday, Kansas is likely to move into the No. 1 spot, making the inviting target all that much bigger.

Texas coach Shaka Smart should hope Kansas ascends to the top spot. The Longhorns are 0-8 all-time against the nation’s top-ranked team. Now may be a good time to snap that streak, too.

“Right now, we’re really confident in our ability,” UT senior Prince Ibeh said. “We’ve proven we can beat anybody. We feel like we can beat everybody. We just go out there every day trying to prove it.”

Texas officials announced on Sunday that approximately 900 tickets were still available for the general public. Another 1,800 tickets were being held for students. Should a full house of 16,540 make it into the building, it would be the fourth sellout of the season.

“I don’t know if (fans) realize what it kind of does to the other team, because we’ve been on the opposite end of that,” senior Connor Lammert said. “Having that support from our fans is huge.”

Kansas coach Bill Self admitted after his team’s 67-58 win over Texas Tech on Saturday he wanted players to enjoy the night.

“I wish the Texas game was on a Tuesday or Wednesday, but it’s not,” Self said. “We’ll be ready to play (but that) doesn’t guarantee we (will) play well. But these guys need to have some fun and enjoy themselves.”

Winning multiple conference titles is difficult enough. What Kansas has done is truly mind-blowing, winning 12 straight Big 12 crowns dating back to the 2004-05 season. Texas split the title with Kansas in 2006 and 2008.

Senior salute: Final Four? ‘The Danimal’ angling for the Big 4