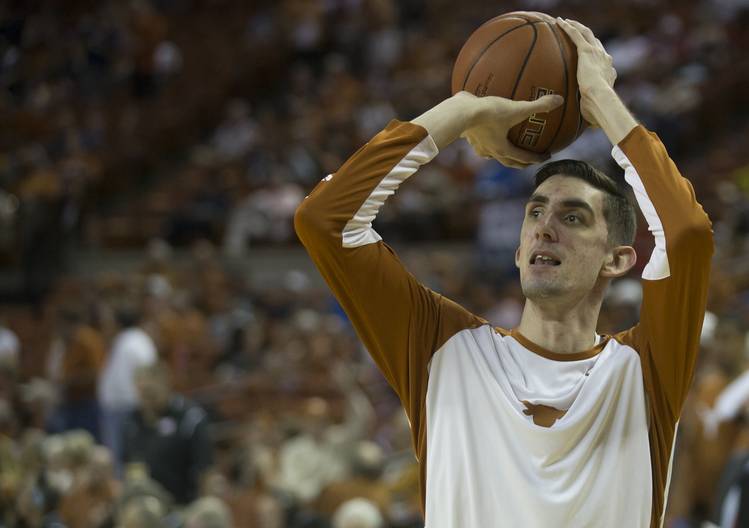 Texas' Danny Newsome warms up before the game against Oklahoma during the NCAA men's college basketball game at the Erwin Center in Austin, Tex., Saturday, Feb. 27, 2016. RICARDO B. BRAZZIELL/AMERICAN-STATESMAN

Coaches are constantly thinking about who’s next on the schedule. Tax specialists anxiously await Schedule K-1s and 1099s.

Maybe there’ll come a day when Danny Newsome regrets leaving Texas’ basketball program after spending four years as a walk-on — whoops, a preferred walk-on, that is. Our apologies.

The 6-foot, 10-inch forward simply can’t pass up Monday’s senior night festivities against No. 2 Kansas, which will include his five teammates who entered school together in 2012 as scholarship players.

Newsome, Javan Felix, Demarcus Holland, Prince Ibeh, Connor Lammert and Cam Ridley have experienced almost everything that college basketball offers. They’ve suffered through a losing season, climbed back into Big 12 title contention, experienced the thrill of a buzzer-beating NCAA Tournament win, worked their way up to sixth in the national rankings and saw coach Rick Barnes give way to Shaka Smart.

“Won, lost, coaching change,” Ridley said. “About six or seven guys transferred while we’ve been here. Anything you can think of has happened to us over these four years.”

Newsome, technically labeled a junior, is essentially forfeiting his final year of eligibility. The Horns can shoot for the Final Four. Newsome wants to join one of the Big Four accounting firms. Can you imagine it? Some Fortune 500 CEO may one day face serious IRS questions. Who’s he calling? “The Danimal.”

“I’ve loved every minute of being on the Texas basketball team, whether that was being in a support role, being on the scout team, holding a pad and getting dunked on by Cam Ridley on a daily basis,” Newsome said.

Newsome is no ordinary accounting major in UT’s prestigious McCombs School of Business. He’s in what’s called the Integrated Masters of Professional Accounting program, which essentially combines a bachelor’s degree and a Master’s degree together into a five-year program. He’s scheduled to finish up in the fall of 2017.

Jai Lucas, UT’s director of operations for men’s basketball, recalls Newsome wanting to have a serious talk three months ago. Presumably, that’s how you inform clients they’re being audited.

“He sat me down and said, ‘Jai, I’ve got something to tell you. It’s going to be hard for you. It’s hard for me. But I’m retiring after this year.’ That’s exactly how he said it,” Lucas said.

Understand, Newsome and other walk-ons don’t play unless Texas is up big. Newsome has played in only 13 games over four years, but he is expected to practice, travel, study and work just as hard as any of the scholarship players.

“He’s not on scholarship. He’s not going to the NBA,” said fellow walk-on Joe Schwartz. “He’s given everything he has to the team just to make everyone on the team better and keep the morale where it needs to be.”

It was all worth it on Dec. 8 against UT-San Antonio. The Horns led by 65 when Newsome subbed in with 3:54 remaining. As usual, fans went crazy; everyone wants the walk-ons to play and score. So Newsome uncorked a 3-pointer. Swish. Then he made another. And to top it off, he unleashed a heat-check trey with 17 seconds left. Bang.

He finished 3 for 4 from beyond the arc that night for a career-high nine points and was mobbed by teammates afterward.

“I don’t care if it was UTSA or we were up 60 points,” Newsome said. “I came into an elite program and knocked down three 3s. That was pretty cool. That was my personal achievement.”

Newsome was no scrub at Langham Creek, a school on the western side of Houston. He averaged 11.8 points as a senior as the school won its first district title in 24 years.

Once during a summer league game, Newsome and his buddies couldn’t believe it when Barnes and assistant Rob Lanier walked into the gym. OK, so they were there to scout Ridley, who played for the Houston Hoopstars, but Newsome held his own.

“He had a good game in high school,” Ridley said, “but to my defense, I wasn’t guarding outside the 3-point line. He probably had four, five, six threes or something like that. You know, with nobody guarding him.”

Lanier checked Newsome’s summer league bio and saw that Texas was his favorite school. So Lanier offered Newsome a spot as a preferred walk-on. In a nutshell, walk-ons act as scout team players. They’ll spend 45 minutes studying the opponent’s plays and then mimic them against UT players in practice.

“You’re never right. You can’t be wrong,” Newsome said. “If you get kicked out of a drill, don’t take it personally. It happens.”

Newsome and McClurg each claim 50 percent ownership, but Schwartz has been given the username and password — a passing of the Twitter torch, if you will.

“I love being a Longhorn. I love being in Austin,” Newsome said. “I wouldn’t trade it in for anything.”