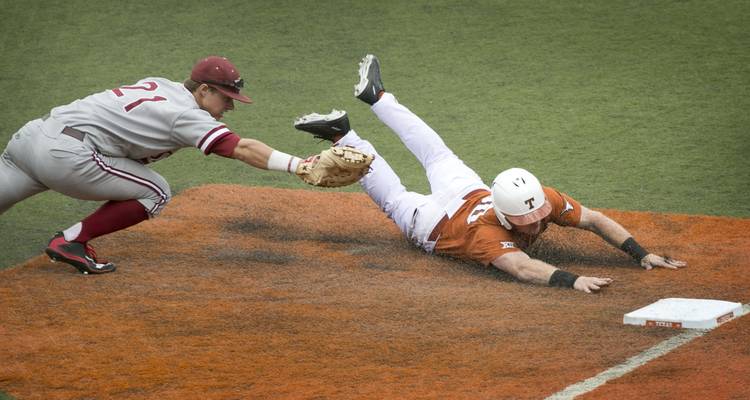 UT's Zane Gurwitz avoids the tag of Stanford first baseman Matt Winaker after he was caught in a rundown in the third inning at UFCU Disch-Falk Field on Sunday February 28, 2016. JAY JANNER / AMERICAN-STATESMAN

It took only seven games, and Texas has already produced its worst performance of the 2016 baseball season.

OK, with three months to go, that may be premature to say, but it’ll take some kind of ugly to top Sunday’s clunker, a yucky 11-1 loss that resulted in a series split with Stanford.

And to think this weekend was going pretty well before the finale, when Texas managed just five hits, looked vulnerable in the field with two errors, and got another shaky start from sophomore Connor Mayes.

The Longhorns (4-3) will see better days than this, but they might not see worse.

“Tough one,” center fielder Zane Gurwitz said. “Best thing we can do is turn the page, get it out of our heads, and move on.”

Eyeing its second series win to start the year, Texas (4-3) looked like an imitation of the hard-swinging squad that won 9-0 a day earlier. Things descended fast after the first inning when Stanford took advantage of Mayes’ struggling command and struck for three runs. The first two came on a soft single to right by Matt Winaker; the third came when Mayes balked with a runner on third.

Mayes settled down a little after the first inning but never fully found the strike zone and had just one clean frame in his four-plus innings of work. His final line showed two walks, three strikeouts and five singles, the last of which chased him from the game on the first at-bat in the fifth.

“That was a rough day, a rough first inning,” Mayes said. “I was proud of the way that, after the first, I was able to figure it out. … I need to slow down a little bit and realize it’s just a game. Sometimes, I overthink it.”

In eight innings including a start against UNLV, Mayes has walked five batters.

Garrido deferred questions about Mayes’ performance to pitching coach Skip Johnson and made it sound like they’ll get together and evaluate the rotation in advance of Tuesday’s game at Texas State. Morgan Cooper, a weekend starter from two years ago before he underwent elbow surgery, is expected to get the nod for Texas’ first road game of the year. A four-game series with No. 11 Cal awaits next weekend.

“We’ll see where the pitching goes on Tuesday when we put it together,” Garrido said.

No matter who was throwing Sunday, a little run support would’ve been welcomed. The only time a Longhorn crossed home plate was in the fourth when Travis Jones tripled to right to score Kacy Clemens. Yet any further damage was dashed when Gurwitz grounded into a double-play to strand Jones at third. That represented the first of nine straight outs induced by Stanford starter Brett Hanewich, who accounted for four of his staff’s six strikeouts.

For the series, Texas batters struck out 41 times, including 18 in a 12-inning loss on Thursday.

“It’s early in the year and there’s gonna be strikeouts,” Garrido said. “We want them to swing the bat. You can’t get your timing with the bat on your shoulder.”

Fielding was a concern, too.

Travis Duke, the first of six Texas relievers to follow Mayes, should’ve turned a double play in the fifth but threw wildly to second base and could get only one out.

In the fourth, third baseman Kody Clemens took a bouncer off the chest and then threw it away to first. Second baseman Joe Baker added a second throwing error for Texas in Stanford’s three-run eighth. Travis Jones, still a novice in left field, couldn’t track a fly ball from Tommy Edman that bounced off of the wall in the sixth.

“It’s not that our infielders are bad infielders, but the speed of the ball was increased by the way they were putting them in play,” Garrido said.

Texas puts it all together for win over Weber State