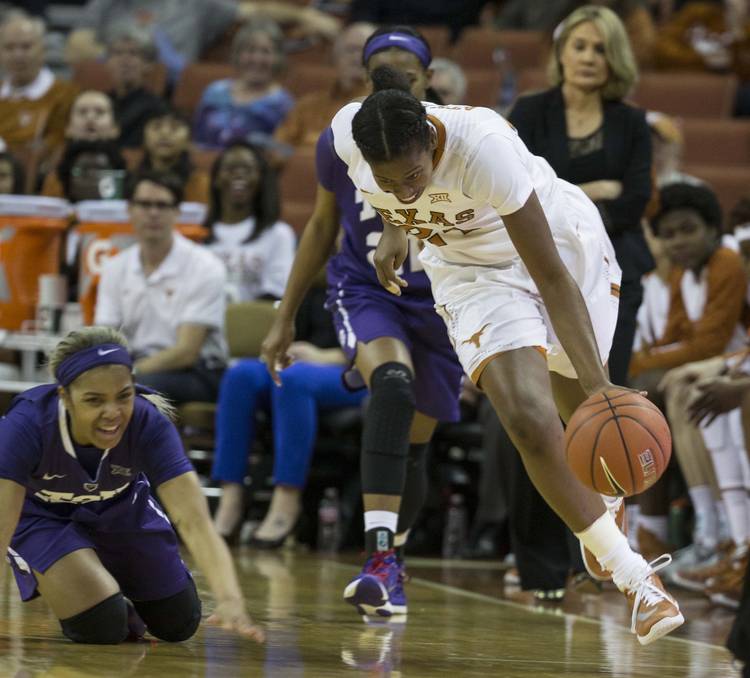 Texas's Ariel Atkins steals the ball against TCU AJ Alix during the first half of an NCAA women's college basketball game at the Frank Erwin Center in Austin, Tex., Saturday, Feb. 27, 2016. RICARDO B. BRAZZIELL/AMERICAN-STATESMAN

A pint-sized sophomore, though, stole the spotlight.

Brooke McCarty scored 16 points and tied a career-high with 8 assists as No. 8 Texas defeated TCU 71-58 Saturday night at the Erwin Center.

Texas ends the regular season at 8 p.m. Monday at No. 4 Baylor. A Texas victory would give the Longhorns a share of the conference championship.

After a sluggish start, the Horns grabbed control by outscoring the Horned Frogs 23-14 in the second half. With McCarty scoring 10 points, Texas led 36-27 at the break.

Boyette, Empress Davenport, Celina Rodrigo and Brady Sanders were honored in an emotional pregame ceremony. It was particularly meaningful for Boyette because her father Kevin Stafford had not seen her play at the Erwin Center since her freshman season and brother JaVale McGee, a member of the Dallas Mavericks, was seeing her play in person in college for the first time.

Boyette played a solid game, scoring 12 points and grabbing 9 rebounds before leaving to a rousing ovation with 3 minutes to play. She laughed when a reporter noted she committed a turnover while driving to the basketball.

“For the record,” she said. “I tried to dunk and it got a little crazy.”

Texas won the game under the basketball, outscoring TCU 37-16 in points in the paint. Texas also owned a 42-26 edge in total rebounds.

Karen Aston was pleased the players “gave themselves a chance” to secure a share of the conference title. They will aim to snap an 11-game losing streak to the Bears.

“At this point you cannot complain about a 26-2 record,” Aston said. “I was pleased with the win. There was a really great amount of energy off the bench. I think the young kids felt no pressure.”

“It would mean a lot to beat those guys,” Rodrigo said. “The seniors have never beaten Baylor. It’s something we want to accomplish. It’s been one of our goals from the get-go.”

Boyette moved up to No. 5 on the all-time rebounds chart with 970, surpassing former Longhorn Annette Smith.

The Big 12 Tournament starts Friday in Oklahoma City. UT will get a first-round bye and play its first game on Saturday.

Coffee is for starters: Ty Culbreth fans 12 in 9-0 win