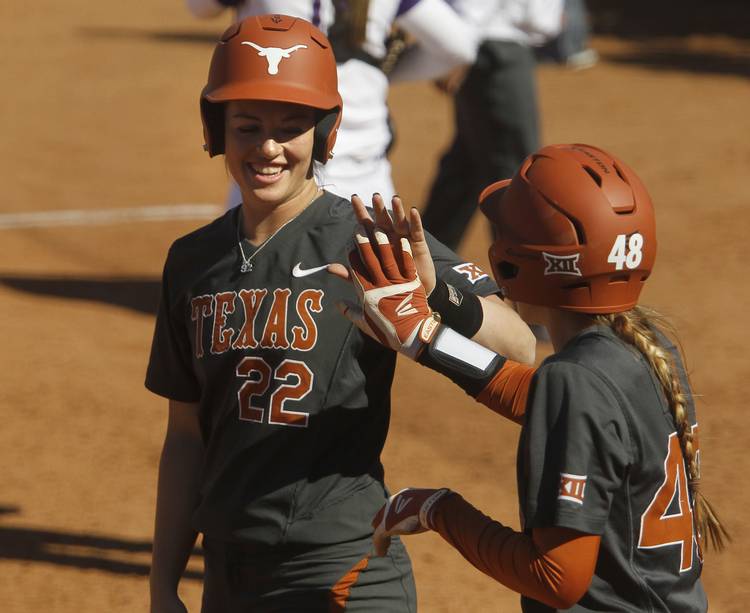 Lindsey Stephens may not be giving up the lead off spot in the batting order any time soon.

In a 5-0 win against Weber State to close the Texas Invitational, the senior from Beaumont went 2 for 3 at the plate with a double, home run and three RBIs at McCombs Field.

Since moving to the the top of the order Saturday after Texas (14-2) was shutout by Tulsa for a second time, Stephens has flourished going a combined 5 for 7 with five RBIs, a home run, double and a triple.

“Obviously, Lindsey likes that lead off spot,” said Texas coach Connie Clark. “I don’t know if we are set on that, but we like some of the options we have have there with our speedsters in the top of the order. It’s not because of anything Devon (Tunning) is not doing, it’s just that that’s a pretty good look for us.”

Texas came out firing on all cylinders Sunday morning with a returning Tunning at shortstop. The junior was pulled from the lineup after the Longhorns’ loss to Tulsa on Saturday.

Stephens led off Sunday with a solo home run over the right field wall in the first inning. It was followed by an RBI-double from Celina Felix and a sacrifice-fly from Tunning to score Felix and give Texas an early 3-0 lead.

In the next inning, Stephens hit a triple to the gap in center field to score Erin Shireman and Stephanie Ceo.

“I really liked out mentality after we reset after game one (Saturday) and then again (Sunday), being on the attack, it was a good day for us,” Clark said.

The 2014 Big 12 Freshman of the Year tossed four innings and gave up two hits and two walks and struck out four batters.

Sophomore Paige von Sprecken relieved Davis in the fifth inning and threw three perfect innings of softball, not allowing a single base runner while striking out two.

“We just focused on letting our defense work for us,” Davis said. “On Sunday, your arm is pretty tired, especially with only two of us right now, so we just really tried to induce ground balls and induce pop flies. When you see your team hitting the way we did, it relieves a lot of stress.”

Davis and von Sprecken are the only two healthy pitchers for the Longhorns. Sophomore Kristen Clark is day-to-day with a nagging arm injury while sophomore Erica Wright is out indefinitely with a rib injury.

“What we are looking for from Tiarra right now is that, if you’re the go-to girl, you have to be tough on Sundays,” Clark said. “It was huge to see that out of both of them.”