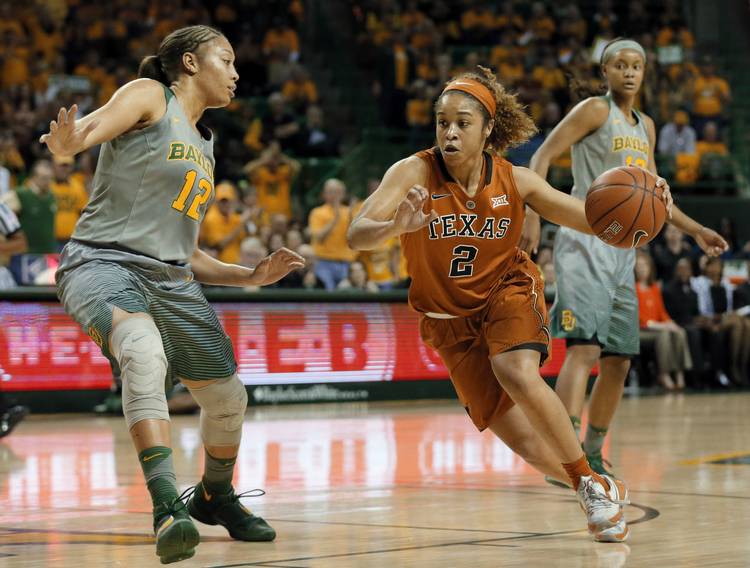 Baylor's Alexis Prince (12) defends as Texas guard Celina Rodrigo (2) moves the ball to the basket for a shot in the first half of an NCAA college basketball game, Monday, Feb. 29, 2016, in Waco, Texas. (AP Photo/Tony Gutierrez)

In a clash of two teams in the Associated Press Top 25 poll, the fourth-ranked Lady Bears clearly looked like they belonged. The sixth-ranked Longhorns shot 29 percent from the field and were beaten on the boards for just the fourth time in 29 games.

Kristy Wallace scored 23 points to lead a balanced scoring attack to lead Baylor to a 74-48 victory over Longhorns Monday night at Ferrell Center.

Baylor (30-1, 17-1 in the Big 12) has won at least a share of the conference regular-season championship. The Lady Bears are 100-8 in conference games during that span.

“I thought Kristy Wallace was terrific tonight,” she said. “We started off well and disrupted them, and she came in and settled them and hit some big shots. They have a lot of talent, a lot of All American’s on that team.”

Did Texas lack passion once the game started slipping away?

Following the game, Baylor players took turns cutting down the nets. Green, gold and white confetti dropped from the rafters.

“Connecticut is by far the best team until someone can beat ’em,” Baylor coach Kim Mulkey she said. “We’re one of the top teams in the country…. This team could get to a Final Four. But again, I can’t guarantee we will. It’s who’s playing good at the right time. We’ve got senior leadership and junior leadership and freshmen that aren’t afraid anymore.”

Baylor took advantage of Texas scoring drought in the second quarter to post a 30-20 lead at halftime. After a bucket by Imani Boyette with 6:17 to play, the Longhorns went the rest of the half without scoring a field goal.

Baylor broke the game open in the third quarter, outscoring Texas 30-10 in the period.

Texas guard Brooke McCarty scored 12 points to lead the Horns in scoring for the fourth time in the last six games.

Aston said it’s “my responsibility” to ensure that Monday’s loss doesn’t affect the players when they open the Big 12 Tournament. Their opponent will be the winner of Friday’s game between the No. 7 and 10 seeds. The No. 7 seed will be either Kansas State or TCU, depending on a tiebreaker to be determined Tuesday. Kansas will be the tenth seed.

The first 8,000 fans of the sellout of 10,284 fans received T-shirt that read “Gold Out.” It was the 13th sellout in Lady Bears history and the first time this season the Ferrell Center was filled to capacity.

Texas puts it all together for win over Weber State