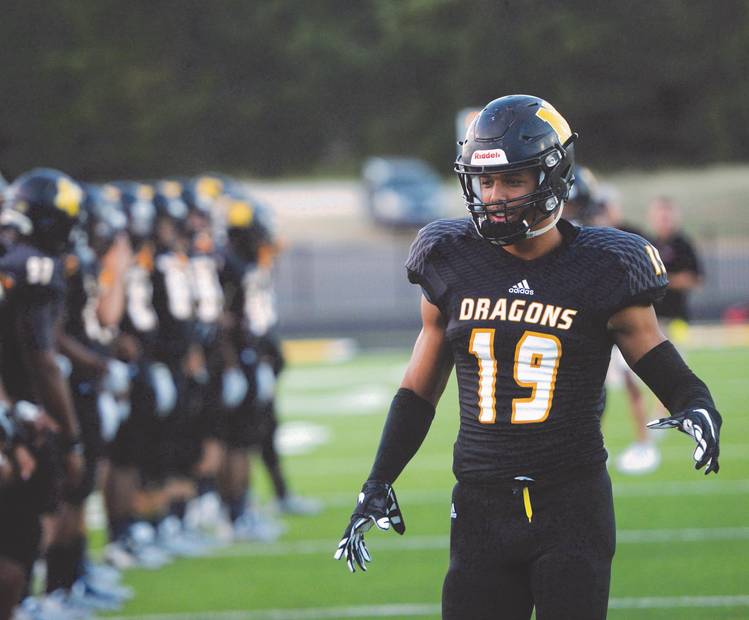 NACOGDOCHES, Texas — As he wrestled with his college decision, the person Brandon Jones needed most by his side couldn’t be there.

Bert Jones would’ve had all of the answers, Brandon believes, but his death five years earlier from cancer meant his son, the nation’s top-ranked safety from Nacogdoches, had to sort through this dilemma without his most trusted confidante.

No disrespect to Mom, of course.

“Even if Bert couldn’t have given any better advice than I could have given, Brandon would have perceived it as better advice and felt more comfortable with his father behind him,” Sarah Jones said.

Stripped of context, it looks like the East Texas star with the Popeye arms, the four or five-star rating, and the 39 scholarship offers has experienced a senior season worth making a movie about, which, well, an independent film crew did up through his Feb. 3 announcement to Texas.

Yet, his story was missing a key figure — Bert , whose passing from liver cancer when Brandon was 12 left Sarah widowed to care for the couple’s five boys.

“He’s been my motivation throughout everything,” Brandon said.

Bert, who was a former running back at Stephen F. Austin State, didn’t get to see the signing day ceremony at Nacogdoches High, where his son rebuffed Texas A&M and Baylor and put on a Longhorns ballcap. He didn’t see Brandon, as a sophomore, return an interception 90 yards as the Dragons beat rival Lufkin for the first time in 21 years. He wasn’t around to see his son tear his posterior cruciate ligament as a junior, or to see A&M coach Kevin Sumlin touch down on the Nacogdoches campus this past season on the Aggies’ Swagcopter.

He didn’t experience the recruiting process and all of its sliminess.

One coach promised Brandon a starting spot for next year, which seemed odd to Jones since that coach already had a multi-year starter returning at safety. And there was a coach who laid out a compelling presentation for his school only to be undermined by players on his own team who told Jones, “I wish I didn’t come here.”

(Which schools? Jones batted down the question, and declined to answer.)

Jones’ profile is the fifth in our series highlighting the Longhorns Class of 2016. To catch up on the rest of the series, here’s an interactive map of Texas’ recruiting class of 2016.

Bert didn’t see the hit that Brandon delivered two years ago that knocked a Jacksonville wide receiver unconscious. Nor did he see Brandon go to Twitter after that game to track down the player and make sure he was doing OK.

Bert, an auditor for the Texas department of mental health and mental retardation, didn’t see Brandon develop into, according to Nacogdoches coach Bobby Reyes, “a better young man than he is a player.”

“Sad that his dad was not here to witness this,” said Larry Centers, a former All-Pro fullback who teamed with Bert Jones at Stephen F. Austin. “I can’t imagine how proud he would be of Brandon. A wide array of emotions just thinking about it.”

Never far from his mind, Brandon wears Bert’s high school jersey number, 33, on his hand towel during games, and he says he’ll continue to do the same at Texas.

Jones (6-0, 195) said his college decision snapped into focus on the night before signing day when he cut off communication with coaches, removed himself from texting threads with other recruits, and decided that if his coaches up and left, “I could still see myself at Texas.” That thought was prescient because the week after signing day, Texas parted ways with defensive backs coach Chris Vaughn, the point man in Jones’ recruitment, for his alleged past involvement in NCAA violations at Ole Miss.

“Thought he was leaning toward A&M, at least originally,” Sarah Jones said. “I would have been happy if he ended up at Timbuktu.”

At Texas, Jones would like to study broadcast journalism or kinesiology.

Call it a hunch, but of the 24 players who signed with Texas last month in the nation’s 11th-ranked class, Jones, who was ranked the highest, has the best chance to be a freshman All-American. There’s a shot, maybe a good one, that he’ll unseat a returning starter, be it Jason Hall or Dylan Haines. But if he doesn’t, Jones, a workout warrior who lifts weights twice a day around his classes and track practice, is all but a lock to see the field in the Sept. 3 opener against Notre Dame.

“He’s got everything,” Reyes said. “It’s not just all of the physical tools, but mentally he’s strong and mentally he adapts to things. He could probably play running back or receiver in college.”

Be on the lookout for Jones’ brothers, too. Brandon, the second of five boys, is ready to hand off his safety spot at Nacogdoches to Brayden, who’ll be a sophomore this fall. Brennan, 12, and Braxton, 10, also have displayed rare athletic ability.

“Everyone tells me I’m gonna be going through this again,” Sarah said.

Next time, there’ll be someone to help out in recruiting.