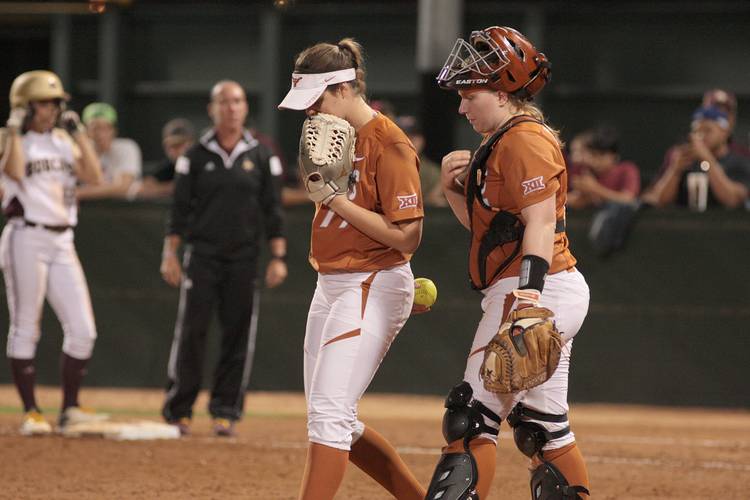 The Bobcats (12-5), led by sophomore pitcher Randi Rupp’s complete game, plated seven runs in the fifth inning in a 9-5 win at Bobcat Softball Stadium. It was Texas State’s first win over the Longhorns since 2010.

“That’s a Texas butt-whoopin’, I would say,” said Rupp, who gave up five runs on nine hits. She struck out six and walked four.

Last year, Texas (14-3) roughed up Rupp — this year’s Sun Belt preseason pitcher of the year — in a 10-2 win. That night, she had only one strikeout, walked five and gave up 12 hits, including three home runs.

“Coming into (Wednesday), I have a totally different mindset now than I did last year. It made a huge difference,” she said. “I struggled a little bit last weekend, so I let it all go and came out here confident, and that showed.”

The Longhorns strung together only two hits through the first three innings, both coming from Lindsey Stephens, who finished the game 3 for 3 with a double and an RBI. The Bobcats took a 1-0 lead in the bottom of the second when Taylor Webb scored on a single from Quincy Charleston with the bases loaded. It wouldn’t be the last time the Longhorns heard from Webb.

Texas finally got onto the scoreboard in the top of the fifth when Tiarra Davis scored on a fielder’s choice.  Stephens reached second base safely on the play, but it appeared Texas State second baseman Kelli Baker tagged out Stephens on her way to second base for the third out. Stephens was called safe, however,  which allowed Davis to score from third. Kelli Hazel scored a second run on Celina Felix’s only hit of the game. That gave Texas a 2-1 lead, but it was the last time the Longhorns led.

Davis walked Ariel Ortiz to lead off the bottom of the fifth, which was followed by a double from Corrina Liscano that just barely missed being a home run.

Texas coach Connie Clark relieved Davis with sophomore Paige von Sprecken, who gave up a three-run home run to Webb on her first pitch. Von Sprecken then walked the next four batters; in all, Texas State scored seven runs off her and took an 8-2 lead after the fifth inning.

Clark said she felt the Bobcats were seeing Davis really well, which led to her decision to pull her.

“I thought (Tiarra) competed well and attacked the strike zone, but they just had a good read on her,” Clark said. “We were trying to establish some speed and different pitches, but they were getting some good looks.”

Kristen Clark relieved von Sprecken in the sixth and gave up a home run to Kendall Wiley.

Texas tried to mount a comeback in the seventh, getting runs from Rachel Scott, Hanzel and Stephens, but couldn’t overcome Rupp and the Bobcat defense.

Texas is off for the next six days and will host UT-San Antonio on March 8. First pitch is scheduled for 4:30 p.m.