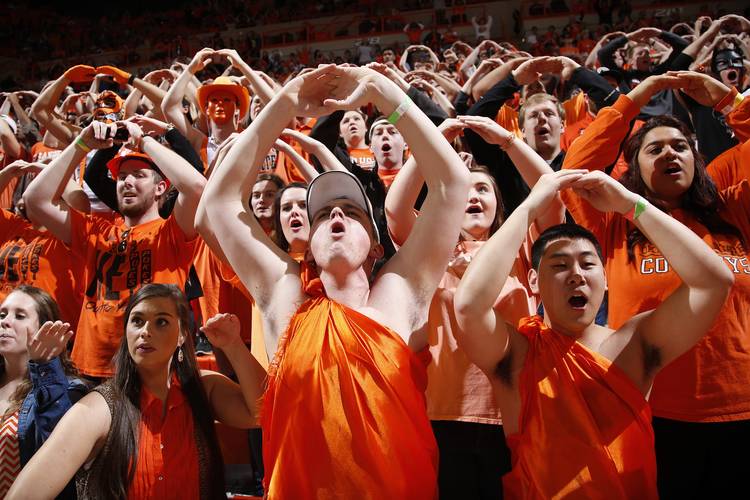 In happier times last season, Oklahoma State fans celebrate in the second half against Kansas. The Cowboys have slumped to 12-18 this season. (Photo by Joe Robbins/Getty Images)

First off, the game is at 8 p.m., a Friday night rarity on the Big 12 schedule. The Cowboys (12-18, 3-14) are drifting aimlessly in what’s become an injury-plagued losing season. Gallagher-Iba Arena is no longer an intimidating venue.

Seeding for next week’s Big 12 tournament is still up in the air, though. The Longhorns are one of three teams with 10-7 league records. Texas is tied with Baylor and Iowa State. Oklahoma is currently third with an 11-6 mark.

Trust this: UT coach Shaka Smart would prefer to say the Horns finished third or fourth this season instead of sixth. So he’ll be interested to see how his bunch bounces back after Monday’s 30-point loss to No. 1 Kansas.

Plus, with one more victory, Texas will cross the 20-win threshold for the 16th time in the last 17 years.

“In the past when we have had rough games, we have responded well,” senior Connor Lammert said.

Smart said guard Isaiah Taylor could barely walk on Sunday after plantar fasciitis flared up in his right heel. Asked if Taylor would play against the Cowboys, Smart said on Tuesday, “I would be amazed if he sits out Friday. He lives for one thing — to play basketball.”

Next week’s Big 12 tournament may not dramatically move the needle either way in the eyes of the NCAA Tournament’s selection committee. Many bracketologists have the Horns pegged as a No. 4 or 5 seed.

Still, committee members have penalized teams for late-season injuries, believing those teams weren’t as good without key players. If Texas’ leading scorer can play in Kansas City, he will.

And UT coaches and staff have their fingers and toes crossed that doctors clear center Cam Ridley to play next week. Ridley, who suffered a fractured foot two days after Christmas, would love to test his endurance against Big 12 competition before the NCAAs.

But first come the Cowboys.

Texas players were all giddy about beating No. 3 Oklahoma. “For our players, it was a feeling of we finally did it. We got ‘em,” Smart said. “We’re not talking about Michael Jordan’s Bulls. But we’re talking about a really, really good Oklahoma team that had our number the past few years.”

But the Horns haven’t beaten the Cowboys in Stillwater since 2011. In fact, neon orange has been the color of choice lately in this series, not burnt orange. Oklahoma State is 6-2 vs. Texas in their last eight games.

Notorious Texas killer Phil Forte (13.3 points) was unable to return from an elbow injury, leaving the Cowboys vulnerable. Then OSU’s standout freshman Jawun Evans (12.9) was lost for the year with a shoulder injury.

It’s not the time to take OSU lightly, though. The regular-season finale is a signal that things are really about to get interesting.

Hello, irony: Texas done in by small ball in 4-1 loss to Cal