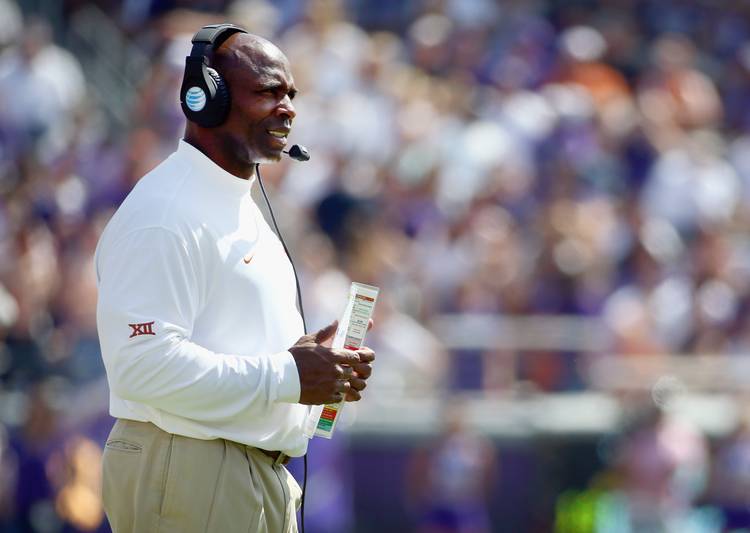 As the curtain rises Monday on spring football practice, Charlie Strong begins what must be considered the biggest year of his professional career.

The Texas football coach is 11-14 after two seasons in Austin. More than half the players were signed on his watch. He’s turned over the coaching staff; only two remain from the initial nine men introduced in January 2014.

This is not hyperbole. If the Longhorns win only four or five games next season, some boosters will gladly buy out the remaining two years on Strong’s guaranteed contract.

There’s a perception Strong must win seven or eight games to be completely safe.

And yet, he begins year three with no real idea who should be the starting quarterback. Strong will be using his fourth play-caller. The players will be learning an entirely new offense. The defensive staff must figure how to rebuild after allowing 30.3 points per game, the second-highest total in school history.

At times, it appears Strong can’t catch a break. He beats No. 10 Oklahoma only to get blown out 24-0 by Iowa State, a team that later fired its coach. After the season, Strong couldn’t land his first choice for offensive coordinator. He needed the university president to fly to Tulsa, Okla., and convince his second choice to take the job.

Strong got some serious momentum with a signing day blitz that landed the nation’s 11th-best recruiting class. Then he fired a well-liked assistant for possible NCAA violations from the coach’s past and got dragged into a nasty divorce case in Louisville.

Neither Strong nor his assistants are made available to reporters prior to spring practice. Strong usually meets reporters after practice begins.

Strong is a coach who badly needs some victories this fall. A bunch of ‘em. With that in mind, here are five questions facing the Longhorns this spring:

1. What direction is Sterlin Gilbert taking the offense?

Gilbert is an Art Briles disciple. However, there’s a huge misnomer about Baylor’s offense. It’s not a pass-all-the-time system. The Bears led the Big 12 in rushing last season by 98.5 yards. Yes, the quarterback is important, but there will be hefty weight on D’Onta Foreman and Chris Warren III’s shoulders this fall.

Last season, Baylor ran 1,103 total plays in 13 games, the third-highest total in the nation. Remember all that talk last March about the Horns running with more tempo, a faster pace? Well, Texas got off just 781 plays, tied for 121st nationally.

Former play-caller Shawn Watson talked about pushing the pace. Gilbert will actually do it.

2. Can the offensive linemen keep up?

One of the best things about a faster offense is that the defense must play on its heels. Think about how Texas reacted at TCU last season.

The Horned Frogs’ first touchdown drive lasted four plays, covering 45 yards in 57 seconds. The next two touchdown drives lasted 1:45 and 43 seconds. TCU led 23-0 at that point. Game over. In the first quarter.

Connor Williams and Patrick Vahe were a pair of freshmen All-Americans. Veteran guard Kent Perkins will be a senior with 24 career starts on his résumé. But that leaves two more holes: Center and either guard or tackle.

New offensive line coach Matt Mattox needs to find players not just strong enough, but ones with terrific endurance. That will be a huge key to Texas’ offensive success.

3. Who wants to play on the defensive line?

NFL analyst Mike Mayock blasted junior Hassan Ridgeway’s decision to go into the NFL draft. Ridgeway’s departure, along with the loss of Tank Jackson, certainly creates a huge gap inside.

The Horns allowed 219.2 rushing yards per game last season, the third-highest total in school history. The program is finally paying the price for failing to consistently recruit and develop interior linemen.

Heading into 2016, Paul Boyette and Poona Ford certainly have a leg up based on game experience alone. That’s why incoming freshman Chris Daniels feels like he can get some playing time early. So does D’Andre Christmas-Giles. Nobody should have a spot locked down at this point.

4. Will the special teams be any better?

Now, kicker Nick Rose is gone, and the Horns did not sign any specialists in their recruiting class. Top returnman Daje Johnson is gone as well.

Punter Michael Dickson will be coming back as a sophomore. The Australian averaged 41.3 yards per attempt last season and had 17 punts go more than 50 yards. He’s the only known quantity returning in that phase of the game.

5. Is there too much pressure on Malik Jefferson?

Jefferson, another freshman All-American, should be the face of the entire program.

He should represent the Horns at Big 12 media days this summer, as Jefferson speaks in almost gospel-like tones about Strong and the program. But is there too much pressure on his five-star shoulders?

There is an incredible amount of hype on younger players like Foreman, Warren, receiver John Burt and cornerbacks Holton Hill and Kris Boyd. More need to step to the forefront and lead this program.

Many of these younger players say they love Strong and the staff. Well, they have to own an 11-14 record, too. Every player in the locker room should be asking themselves a simple question: Am I doing enough to help Texas win?

The answers won’t truly be revealed until Notre Dame comes calling on Sept. 3.