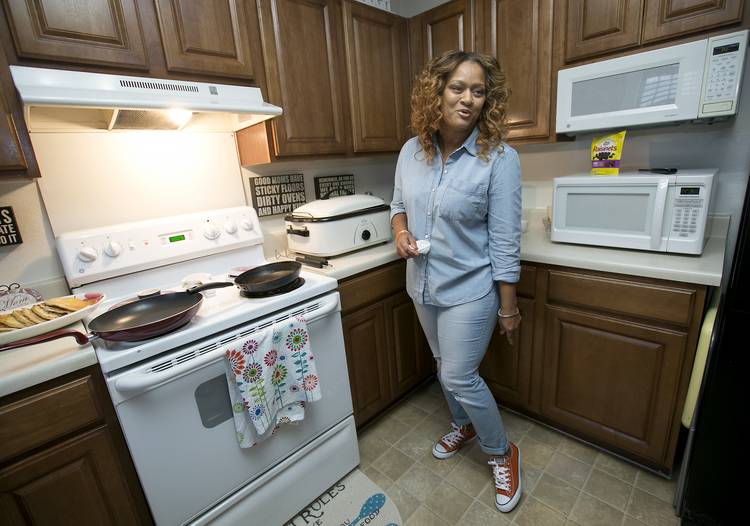 Texas coach Charlie Strong is happy to say he did both.

Remember the story Strong shared on signing day about the pancakes he devoured at Fowler’s home? The taste blew away the health-conscious coach, who then disregarded his normal routine and went for seconds.

Turns out, his praise of Ericka Williams’ cooking is shared by many others.

Per anyone’s rankings, Williams is a five-star, a blue-chipper in the kitchen. Just about every weekend she whips up a big breakfast for her big family, and within 30 minutes she has a spread of fruit, sausage, bacon, eggs and mouth-watering homemade pancakes, whose recipe she has kept secret to all but three others.

Strong didn’t ask for the recipe, and probably wouldn’t have gotten it anyway. Williams’ 26-year-old daughter, Kamrye, can’t even get her mom to give up the secret.

“She’s not into cooking yet, so there’s no reason to share it with her,” Williams said.

Miles deserves some sympathy. The LSU coach fought hard to hold onto Fowler’s commitment, who had pledged to the Tigers last June, only to lose the four-star outside linebacker from Manor on signing day. And to think Miles didn’t even get to drown his feelings in a good meal, instead settling for a glass of lemonade during a brief visit to the family’s home.

Williams, a nurse who does in-home care, has a lot of open mouths to feed. She has five children of her own, including Fowler, and since 2005 she also has raised three of her step-sister’s children after originally agreeing to take them in for one month. At one point she had nine kids living in her former two-bedroom, one-bathroom home in East Austin before a nephew had to leave for violating rules of the house.

But for all of her children she gives her kind and gentle heart.

“Our cousins showed up with the clothes that they had on their back and they’ve been living with us for (11) years,” Fowler said. “It’s never boring at the house. We’ve definitely been through a lot.”

A lot of pancakes, too. Williams is now recognized most for those pancakes. Shortly after Strong’s signing-day endorsement, Williams took her boyfriend to the emergency room with food poisoning, and a nurse, who must have been aware of Strong’s press conference, recognized her as “the pancake lady.”

And no. Williams’ boyfriend didn’t get sick from anything she cooked.

Last month, for an interview for this story, Williams had already prepared her pancake batter, which contains the secret ingredient, or step, or whatever it is that she’s refused to share with anyone else besides her boyfriend, a grand-daughter, and an 11-year-old niece that she’s adopted as her own.

“If I tell you, I might have to hurt you,” said Williams, who learned the recipe from her grandma.

She did reveal some tips. When using chocolate chips, mix them in with the batter. Also, to ensure the pancake comes out properly rounded, pour the batter in a steady stream at the center of the pan. Drop a lump of butter on top of the pancake while it’s in the pan and let it melt.

Upon review, Strong told the truth on signing day. Williams’ pancakes are big, fluffy, crispy around the edge, and generally to die for.

“Sprinkled with a wink, a dash of kiss, and whisked with a lot of love,” she said.