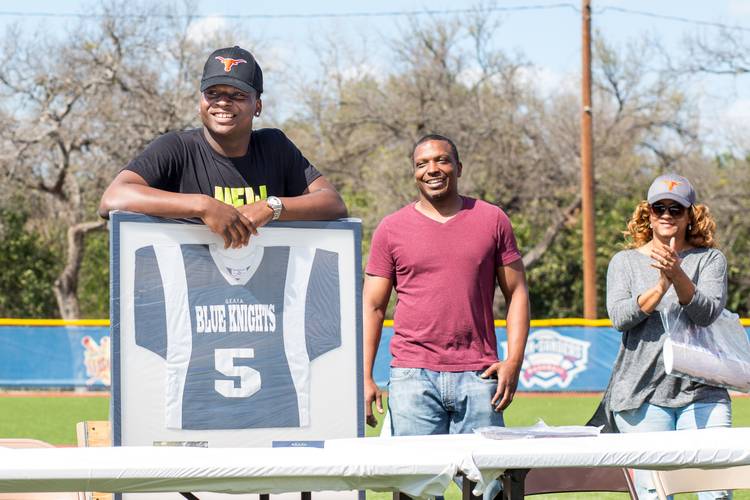 University of Texas football recruit Erick Fowler had his first youth football #5 jersey from his time as a Blue Knight retired during a ceremony by Greater East Austin Youth Association at Downs Mabson Fields Feb. 27. 02/27/16 Tom McCarthy Jr. for AMERICAN-STATESMAN

MANOR — For the first time in its 40-plus years, the Greater East Austin Youth Association wanted to retire the football jersey of one of its alums.

So on Feb. 27, about 50 people close to Erick Fowler convened at Downs Mabson Fields off East 12th St. to barbecue, jam out to old-school soul from Curtis Mayfield and pay tribute to Fowler, the Manor linebacker headed to Texas who as a youngster was affectionately known on those fields as “The Beast.”

There was one problem. Fowler never had a jersey number — at least not one that was permanent — so confusion arose about which digits the league would immortalize. The story goes that Fowler, a four-star recruit and an 11th-hour addition to Texas’ 11th-ranked signing class, changed his number prior to every Blue Knights game to throw off opponents who were trying to scheme against the 10-year-old dynamo.

Organizers settled on No. 5, the jersey Fowler wore in his final game.

“I was the best player, so they were always targeting me,” Fowler said. “Every time I got the ball I would score, or on defense, I would smash people.”

Not much has changed, except for the surface area at Downs Mabson, where Fowler, a team MVP each of his three seasons, followed in the steps of past GEAYA stars like Chris Houston, who went on to star at LBJ, then Arkansas, then was drafted in the second round by the Atlanta Falcons, or former LBJ running back Shon Mitchell, who played for Texas.

Fowler said he was surprised to see that the facility is now layered in turf, the result of a 2014 gift from the Round Rock Express and others, who contributed $110,000 to ensure kids no longer would scrape up their knees and elbows on an unforgiving mixture of hard dirt and sticks.

Playing in the GEAYA could be painful. Especially for those who had the misfortune of mixing it up with Fowler, the Beast of Austin’s Eastside, whose rough play caused opponents to literally walk off of the field and find some other way to spend their weekend mornings.

Fowler grew up briefly in a home down the street from Downs Mabson with his four siblings and four of his cousins, and played with friends in the wooded area behind the fields. Austin was his first home, and it’ll again be where he lays his head when he makes the 20-minute drive from Manor to move onto campus in June.

Initially, Fowler was prepared to branch out and see something new after committing last summer to LSU, the team he grew up playing as in video games. But Texas coaches stayed in contact and closed the gap in the weeks leading up to national signing day on Feb. 3 before Fowler, in a tense early-morning ceremony at Manor High, invited his family to the stage and announced his college choice by putting on a UT ballcap. His brother Jeremy, 17, a sophomore linebacker and tight end at Manor, sensed Texas was the pick three days earlier when his brother bequeathed an LSU backpack to a family friend. And Fowler’s sister, Kamrye Williams, 26, felt good about the Horns’ chances when her brother told her UT made him feel a way “that LSU didn’t.”

But everyone else was left guessing, including Fowler’s father, James, a former standout player at LBJ who had hoped his son would stick with LSU to get away from home and avoid making the same mistake he’d made when he rebuffed other offers to attend Southwest Texas State in San Marcos. James lasted only two years with the team.

“That’s the only thing I regret in my life,” said James, who said he’s content with his son’s choice and is proud to be a “UT dad.”

It was James’ idea to switch his son’s Blue Knights jersey for every game. He grew up a Longhorns fan, so he got a kick out the time Erick wore No. 34 and, with his thighs bursting through his pants, resembled a miniature version of two UT legends who wore the same number — Heisman Trophy running backs Earl Campbell and Ricky Williams.

Of course, it was difficult to hide Fowler’s greatness for long, so it took only a handful of plays before opponents identified him.

“Not long at all,” James said.

With respect to Fowler’s family and his coaches, the person perhaps most responsible for his star turn is someone Fowler has never even met. It’s Dave Campbell, or at least Campbell’s popular “Texas Football” magazine, which Fowler couldn’t wait to get his hands on prior to his sophomore season. To his bewilderment, Fowler, who missed the early part of his freshman year with a meniscus tear that he’d suffered in basketball, was nowhere to be found in the magazine’s list of the state’s top sophomores.

“That definitely flipped a switch for me,” Fowler said. “That’s when it all started.”

Fowler began leaving practices at Manor and going straight to CrossFit, an Austin fitness and training center. With the help of his father, he honed a sturdy physique that today checks in at a Charlie Strong-approved 6 feet, 2 inches and 235 pounds. His most impressive goods are his feet; Fowler’s highlight reel is brimming with hopeless ball carriers trying in vain to shake him.

Back to the magazine snub. That sophomore season, Fowler went berserk — 19 sacks, four forced turnovers. He followed that up with a junior year of 16 more sacks, giving him 35 in two seasons. He was named District 17-5A’s defensive MVP. He earned first-team All-Central Texas honors both years.

“What he did as a sophomore was freakish,” said Greg Tepper, managing editor of Campbell’s magazine. “In a class of really outstanding defenders, I think he has to be considered one of the very top products to come out of Texas. He’s really special.”

What a difference two years can make. In the magazine’s latest issue, Fowler cracked its “Tops in Texas” list as one the state’s three best linebackers, joining fellow Texas signee Jeffrey McCulloch (Aldine Davis) and Alief Elsik’s Dontavious Jackson, who spurned the Longhorns on signing day for Florida State.

Curiously, Fowler’s senior season was underwhelming, at least statistically, with a relatively pedestrian seven tackles for loss and five sacks. He was conspicuously absent from the American-Statesman’s All-Centex team, which ended up featuring first-team linebackers Mac McCaskill of Cedar Park, who signed with Henderson State, and Vista Ridge’s RJ Phillips, who signed with Colorado School of Mines, and LBJ’s Chris Sanders, a junior.

Fowler’s coach at Manor, Sadd Jackson, believes Fowler may have been distracted by his college decision and that he also may have lost the same drive that enabled him to become such a coveted recruit in the first place.

“Hunger makes you want to eat,” said Jackson, who left Manor after this past season for Frisco Lebanon Trail. “When you’ve already eaten and you’re full, you’re not that apt to eat sometimes.”

Fowler, however, is of the opinion that his senior stats dipped because opponents ran the ball away from him. He said he felt liberated blending in with other stars at the U.S. Army All-American Bowl in San Antonio, where he finished second on the West squad with five tackles and a quarterback hurry.

“I’d be on the wide side of the field, and they’d run the opposite way on purpose,” Fowler said of his senior season.

Which begs the question: Why not change jerseys?

Longhorns Class of 2016: Erick Fowler’s mom’s pancakes are ‘a wink, a dash of kiss, and whisked with a lot of love’