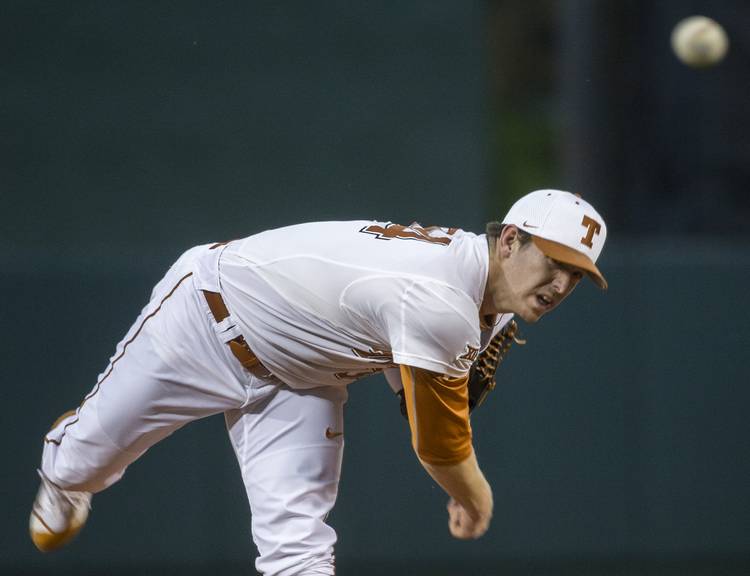 Texas' Kyle Jonhston against Cal during the NCAA men's college baseball game at the UFCU Disch-Falk Field in Austin on Friday, March 4, 2016. RICARDO B. BRAZZIELL/AMERICAN-STATESMAN

The record says Texas is a mediocre baseball team, but their coach isn’t buying that at this point.

Friday’s 4-3 loss to Cal dropped the Longhorns to .500, yet Augie Garrido is choosing to stay positive and says he sees progress being made.

“There are so many things to be excited about and the loss has a tendency to erase all the good things that happened, but I’m not gonna let it go there,” Garrido said.

Let’s start with the good stuff.

Kyle Johnston (1-1) showed good command in defeat, striking out six and keeping Cal off the board in four of six innings.

And after falling down 4-0, the Horns picked away at the deficit with runs in the sixth, seventh and eighth innings. They nearly kept it going before Zane Gurwitz and Bret Boswell struck out swinging to end the game with two runners on base.

Freshman reliever Beau Ridgeway had his finest outing in his five appearances, retiring eight of the nine batters he faced to prevent 10th-ranked Cal from inflicting further damage in the late innings.

So, yes, there were positives, but that 5-5 record doesn’t look too sharp, and it could actually get worse with five more games against top-15 teams over the next week. Friday’s loss was the second in a row to start a four-game series with Cal, which took the opener 4-1.

Baker’s RBI sacrifice fly in the sixth inning started the late rally for UT and marked the first run given up by Cal starter Daulton Jefferies in 17 2/3 innings this year. Jefferies, a preseason All-American, entered the day with a ridiculous 17:3 strikeout to walk ratio and was holding hitters to .178 batting average. He cruised through the first five innings, surrendering only a single to Baker in the first and a double to hot-swinging Kacy Clemens in the third. In the second, he started off Ben Kennedy with three straight balls before firing back with three strikes for one of his seven strikeouts.

Before giving up a single to Gurwitz to start the sixth, Jefferies (3-0) had retired nine straight batters.

The game’s other starter, Johnston, deserved a better fate. He would’ve been out of the third inning had Kennedy, a reserve who was filling in for the injured Tyler Rand, not misplayed a routine fly ball in left field that dropped in for a run. The next at-bat, Johnston bounced a ball past catcher Michael Cantu for a second run.

Kennedy was benched in the fifth for defensive replacement Jake McKenzie.

“He broke back and then he came in and then he stopped,” Garrido said of Kennedy. “He wasn’t quite sure if he could catch it or not. It was an instinctive reaction.”

Another fielding blunder, a throwing error by Boswell, the short stop, contributed to Cal’s second run in the sixth.

In each of the three innings it scored, UT probably should have gotten more than one run. In the sixth, Tres Barrera tapped weakly to the pitcher with a runner on third. In the seventh, after No. 9 hitter Brady Harlan ripped a RBI single up the middle, Gurwitz struck on three pitches with a runner in scoring position. In the eighth, Barrera bolted for third and was doubled-up on a hard liner by Kody Clemens.

But overall, Garrido was pleased.

“As far as progress, the guys in the batter’s box were better,” Garrido said.