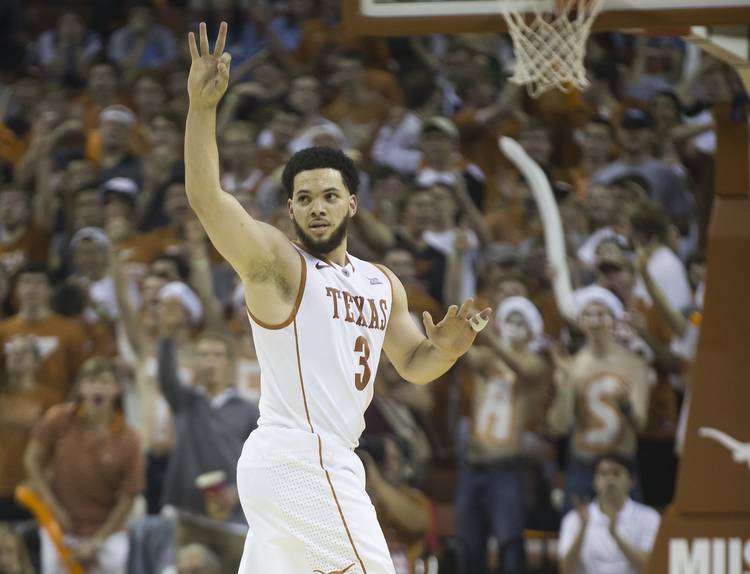 Texas guard Javan Felix celebrates a 3-pointer against North Carolina during the second half of an NCAA men's college basketball game at the Frank Erwin Center in Austin on Saturday, Dec. 12, 2015. RICARDO B. BRAZZIELL/AMERICAN-STATESMAN

One of the coolest things about Javan Felix is that he’s a people person.

“I never blow people off anyway,” Felix said. “I talk to a lot of different people.”

So it’s really not surprising to hear Felix had Shaka Smart’s phone number when the Virginia Commonwealth coach’s name was connected to the Texas vacancy last spring. The two met at a USA Basketball camp years ago and immediately hit it off.

Felix, a 3-point specialist who loved VCU’s spectacular 3-point shooting, couldn’t wait for Smart to get to Austin.

“Once he got the job, I immediately reached out to him as soon as the news broke,” Felix said. “Couldn’t wait to play for him and can’t wait for him to get here.”

The senior is certainly going out on top. Heading into the postseason, Felix has set new career highs in shooting (.442) and free throws (.844). Smart must like what he sees; Felix is playing a career high 27.3 minutes per game.

The American-Statesman sat down with Felix to discuss losing during his freshman year, the turnaround under Smart and how he feels about the state of the program going forward.

Let’s start at the beginning. What do you remember from that first year, the 2012-13 season. What do you want to remember?

The first year, I felt like was the most important year of my career. So much adversity, so much to learn from. So much that made me better, us better as a group. And, we got our heads kicked in. We learned how to play through that, learned how to take our work ethic to another level and we really just learned how to respond and fight at this level.

That first year, the locker room has always been described as dysfunctional. Was that how it really was?

What’s been the biggest part of your development as a player?

I would say my confidence. Definitely, because my freshman year, we were losing. Wasn’t playing that well. I felt like I was a big part of us losing that year. Yeah, and then my sophomore year… well, prior to my sophomore year, we got in the gym and worked really hard so we could change that around. We did our best to put a better showing out on the court. From there, my confidence, just kept building and building.

You have never wavered with the media when people ask about your 3-point shooting. If the media was asking, surely people on campus were asking. Why do you keep shooting so much?

I just know the most important people, which are my teammates and my coaches, they encourage me to keep shooting. They see how hard I work on it all the time, every day. It’s those couple moments when I have a bad shooting night that people will say stop shooting or, ‘Why do you keep shooting?’ and stuff like that. But as soon as I make a couple of them, people will be like, ‘Oh, man. I love your 3s.’ So you can’t get caught up in stuff like that. It comes and goes. You just have to be consistent in what you do and that’s a part of what I do.

Is it fair to say that you are going out excited about Texas basketball? You were down last year but got rejuvenated again with a new coach. Are you still feeling that way?

Definitely. Definitely. I’m having a tremendous amount of fun. Each and every day, waking up every day, I’m just having fun, loving what I do. Loving my teammates, this university, the fans, everybody. It’s been really fun for me this year. And on top of that, we’ve been playing well. I think that’s part of us playing well, all of us are having fun. So I’m definitely going out excited and in a great frame of mind.

When Smart started in on having good relationships, how was that received in the locker room? Did everyone think he was legitimate? Or, because he was new, did the players feel like, ‘We’ll try anything?’

To be honest, we were surprised that’s the first thing he talked about — having a relationship with him. We just didn’t know what to expect. From him coming in and when he got here, that’s the first thing he talked about. It was just different. We bought into it. Now, it took us awhile, because we had to get used to him, and they had to get used to us. So, yeah, it took a minute. But once we really, really got into it, it’s been great for us ever since.

Did something happen in China or in the Bahamas where you knew it would be OK with this new coaching staff?

I can’t really say it was just one thing. He’s just so consistent every day with the way he treats us, the way he talks to us, how much he cares for us. He doesn’t have to be that way. He doesn’t really have to put everything he has into us like he does. I mean, he just really met us. And he’s been like that since day one. He dove two feet in with everything he had. We saw that he did that, and he just met us. How can we not meet him halfway? It’s just been healthy, really. When you find yourself a tad not confident, he’ll be right there to saying something to build you up. ‘You’re good. You’re good. You’re a good player. Don’t forget that.’ Stuff like that. It’s the relationship is really helpful for all of us.

When are you going to get a degree?

I graduate in May. I’m getting my degree. I’ve only got two classes right now. And I’m a (teaching assistant) in a basketball class.

What?! How’d you swing that deal?

It was part of the program. It’s in Gregory Gym. Monday through Thursday every morning, 8 o’clock. We do everything. We break the whole game down. Fundamentals, ball handling, screening, cutting, everything. Shooting. This morning, we were even teaching them about referees. How the ref calls games? What are the calls? All that stuff.

I’m the only basketball T.A. There are a couple other people that T.A. But they think it’s fun they see me out there. One time, we were playing knockout at the end of class. One of the dudes got me out, and the whole class started cheering. Yeah, they were happy.

Why? Just because you are the UT basketball player?

Uh-huh. So ever since then, I haven’t lost yet in that class. But it’s fun. I like it. People tell me that I could be a coach, but I’ve never really tried it until now.

So what happens after graduation in May?

Do you see yourself staying in Austin or going back to New Orleans?

You’ve suffered multiple concussions in the past. How are you doing health wise? That hasn’t been an issue this year?

If I were to write a summation of your time at Texas, what’s the one thing you’d want Texas fans to know about your time here?

I would say I never gave up when things were bad or weren’t going my way. Whether that be us losing or injuries, concussions, coaching change or whatever. I stuck with it. I’ve been resilient through all the adversity that’s come my way. In the end, I’ve been successful.

Longhorns Class of 2016: Erick Fowler’s mom’s pancakes are ‘a wink, a dash of kiss, and whisked with a lot of love’