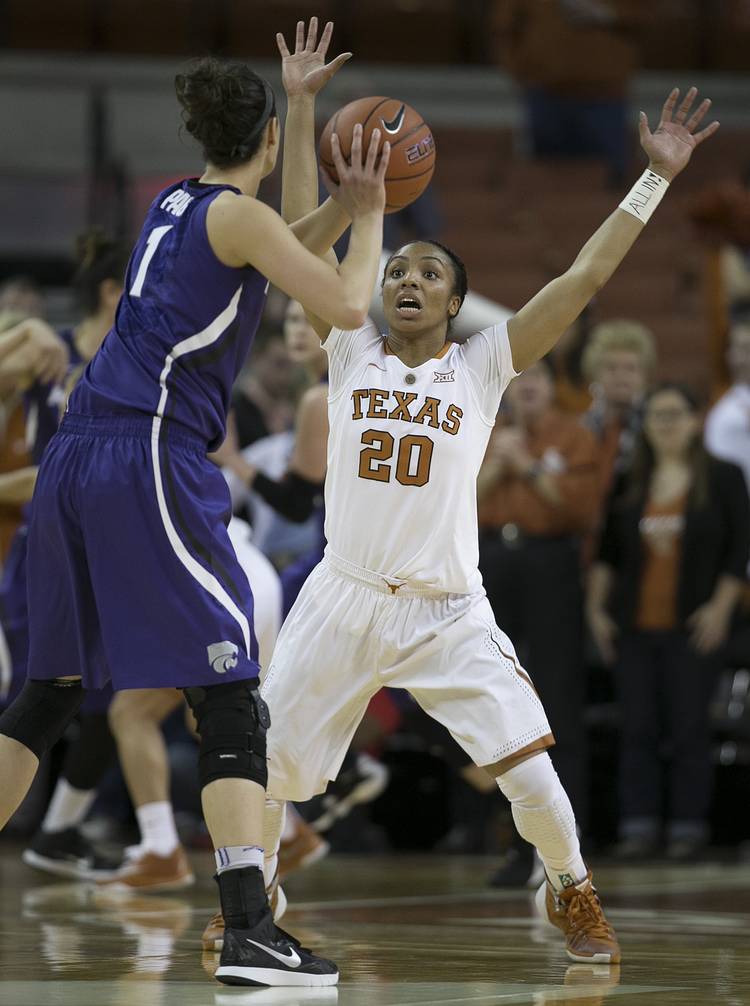 OKLAHOMA CITY — There are no categories on the stat sheet for bringing energy to the court, scrambling for loose balls or locking arms with opposing players.

If there were, Brianna Taylor’s name would be all over it. At Texas, the junior has played shooting guard, small forward and power forward. She has started and she’s come off the bench. When Karen Aston looks for a spark, she locks eyes with the 5-foot-9-inch Taylor. The player that the Texas coach once described as the Longhorns’ X-factor is expected to be a big contributor when post-season play begins on Saturday at the Big 12 tournament.

Texas, the No. 2 seed, will play at 6 p.m. at Chesapeake Energy Arena against the winner of Friday night’s TCU-Kansas play-in game.

“Coach Aston knows what’s best for this team,” Taylor said this week, during a practice break. “No matter what position I’m called upon to play, that’s what I have to do. She knows what she needs on the floor.”

Texas (26-3) aspires to win the conference tournament. The real prize, though, is the NCAA Tournament, which begins March 19.

In Oklahoma City, the sixth-ranked Longhorns will have to shake off the memories of Monday’s 74-48 regular-season ending loss to No. 4 Baylor. If suffering a 13th straight loss to the Lady Bears haunts this team, players aren’t showing it publicly.

“I know that things didn’t go the way that we planned in Waco, but we can only get better from here and learn from it,” Taylor said.

Taylor’s comments reflect the mood of a team that’s made great strides in Aston’s fourth season. At this point last year, the Longhorns were entering the Big 12 tournament at 18-9.

“The mindset is to stay together,” senior guard Celina Rodrigo said. “We are not going to let this loss tear us apart and lose our confidence. We are going to try to have the same confidence and energy as a team, and take that into the tournament.”

Sophomore guard Brooke McCarty, who has led the Longhorns in scoring a team-high 10 times, is ready to put the Baylor loss in the past.

“I know it’s a tough loss, but it’s never been our mentality to dwell over a loss for a whole week,” McCarty said.

Despite three conference losses, this has been a season of milestones for the Longhorns:

After reaching the Sweet 16 last season — a loss to eventual national champion UConn — Texas’ goal is to get to the Final Four in Indianapolis.

“It’s a new season now,” Taylor said. “From now on, we’re 0-0. Now we think of it as survive and advance. We have to change our mindset because now it’s win or go home.”

Hello, irony: Texas done in by small ball in 4-1 loss to Cal