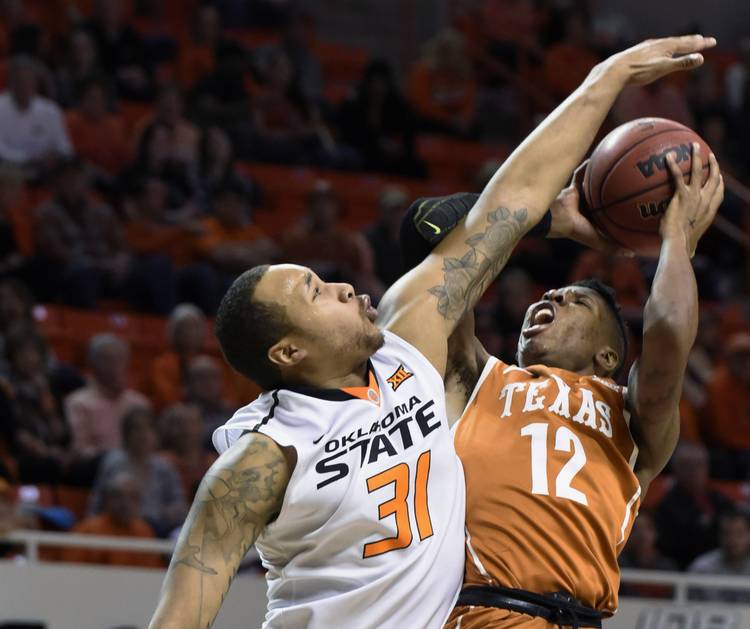 That’s about the only excitement around Stillwater these days, especially since the basketball team cratered in January.

Gallagher-Iba Arena was three-fourths empty and mostly quiet Friday night. That made it easy for Texas coach Shaka Smart and various bench players to shout positive reinforcement at freshman Kerwin Roach, who caught fire in the second half.

Roach simply took over down the stretch, scoring all of his team-high 15 points after the break and powering No. 23 Texas to a 62-50 win. It was Texas’ first in this once-harrowing, hell-raising holler house since 2011.

“All I know, I had my team behind me,” said Roach, who had his best game since late January. “My teammates were cheering me on, just telling me to keep going. And I had coach Smart in my ear saying, ‘Go attack ’em, go attack ’em.’”

With the victory, the Longhorns finished the regular season with a 20-11 record. Not too bad for a team that started the year on the other side of the planet with a loss to Washington in China. And then went 1-2 in the Bahamas. And lost to TCU, the worst team in the Big 12.

“We didn’t play particularly good today, either,” guard Isaiah Taylor said. “It was senior night. Our senior night was ruined; we got beat by 30. So we wanted to ruin theirs, too, as bad as that sounds.”

The Horns compiled an 11-7 record in league play without injured center Cam Ridley, who could return for the postseason if doctors believe his once-fractured foot is ready. That should put Texas in the 11:30 a.m. slot Thursday at the Big 12 tournament in Kansas City, Mo., as either the No. 4 or 5 seed.

“There’s certainly some games we’d love to have back. But it doesn’t work that way,” Smart said. “We’ve had some really big wins. Now, it’s about making sure we go up to Kansas City playing our best basketball.”

Taylor logged 26 minutes despite suffering from plantar fasciitis in his right heel. The sharp, shooting pains were dulled somewhat by adrenaline. “I ain’t gonna lie. It hurts a lot. But I’m going to play unless my foot’s cut off. I’m going to play regardless,” said Taylor, who walked out carrying his protective boot.

Taylor had 12 points against the Cowboys (12-19, 3-15 Big 12). Center Shaq Cleare’s baby hook was working, too, as he finished with eight points and eight rebounds. But the Horns needed more, especially with OSU taking a 33-31 lead shortly after halftime.

“Snoop,” as he’s known inside the locker room, scored on a swerving left-handed layup. On the next possession, he threw a touch pass to Prince Ibeh, who threw down a monster dunk and drew a foul. Ibeh banked in the free throw, and the Horns had a five-point lead with 3:43 remaining.

Taylor almost lost the ball for a turnover, but it wound up in Roach’s hands. The state champion triple-jumper turned loose a 3-pointer, which swished true and made it a 10-point game. “That’s what you call just having a good day,” Roach said.

“You’re talking about a guy who has limitless potential,” Smart said. “He knows. We all know. He’s still got a lot of progress to make. That’s the exciting thing. But nights like tonight are steps in that direction.”

What few Oklahoma State fans that did show up started heading for the exits.

The 4,023 in attendance were no doubt grumbling about OSU going 13 for 22 at the free throw line, and missing the front end of multiple one-and-ones. Fans also may hope OSU officials show coach Travis Ford the door. Maybe there’s some leftover Wickline money for that, too.

The Horns walked out with a spring in their step. Monday’s 30-point loss to Kansas suddenly felt like it happened weeks ago.

“That Kansas game, that wasn’t Texas basketball,” Cleare said. “That was a hard one to swallow, but we got refocused and came back and got this one tonight.”