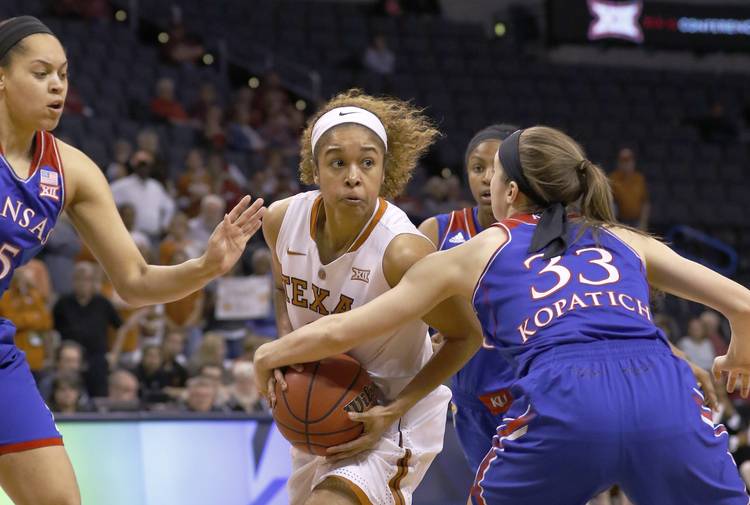 OKLAHOMA CITY — Celina Rodrigo knows her role with the Texas women’s basketball team. Direct the offense with passing and patience. Remain calm in the face of adversity. Find the player with the hot hand.

For four years, shooting the ball has been an afterthought.

The senior point guard changed roles on Saturday. All four of her field goals were behind the three-point line as she scored a team-high 13 points in UT’s 66-50 victory over Kansas in the second round of the Big 12 women’s tournament at Chesapeake Energy Arena.

It marked the first time in 30 games Rodrigo has finished as the team’s top scorer.

Karen Aston certainly like her view of Rodrigo’s new-found offense, saying she “has been trying to drive too much” in recent games instead of looking for her sweet jumper.

“When you’re in conference play at this point, everybody knows every breath you’re going to take,” she said. “We’ve been talking the last few days about her making an adjustments to work on catching and shooting a little bit more.”

In a choppy game punctuated by 42 personal fouls — 21 for each team — the Longhorns needed someone to step out of her comfort zone.

Rodrigo helped the Longhorns break free with a pair of three-pointers in a two-minute span of the fourth quarter. Her second trey put comfortably ahead, 60-47, with 3:30 to play.

“My teammates were able to find me in the right spot at the right time and I was able to knock down those shots,” she said.

Kansas (6-25) had an early 9-8 lead on a layup by Tyler Johnson with 1:13 to play in the first quarter. Rodrigo responded with her first three-pointer of the night to give Texas an 11-9 lead.

KU coach Brandon Schneider said Texas was too tall in the paint and too deep for his Jayhawks to pull off another tournament stunner. Kansas (0-18 in conference during the regular season) shocked many on Friday night defeating TCU 81-64.

“Texas did a nice job of moving the ball and we were late to her on several occasions and she stepped up, as a good player should, and made some open shots,” Schneider said.

Sophomore Ariel Atkins had a good all-around game, scoring 11 points to go along with 3 rebounds and 2 steals. Guard Brooke McCarty chipped in 10 points and 5 boards.

Atkins also paid tribute to Rodrigo for her clutch shooting.

“It was a huge lift for us, because we know Celina is capable of a lot,” the former Duncanville High start said. ” She’s the type of person who won’t give herself enough credit for what she’s capable of, so I think it’s a confidence builder for us to see her like that.”

As for Sunday’s opponent, Texas swept West Virginia during the conference season, winning 65-54 on the road and 73-50 at the Erwin Center.

Aston: “Our players and staff are extremely proud of the year we’ve had. I think they understand how to push the reset button in tournament play. So it’s sort of like — it’s over, whatever we did, it’s over, whether it was good, bad or ugly, it’s over. We need to move on to this portion of tournament play and reset for the NCAA Tournament.”

Unlike last spring, Texas football reboot appears to be real