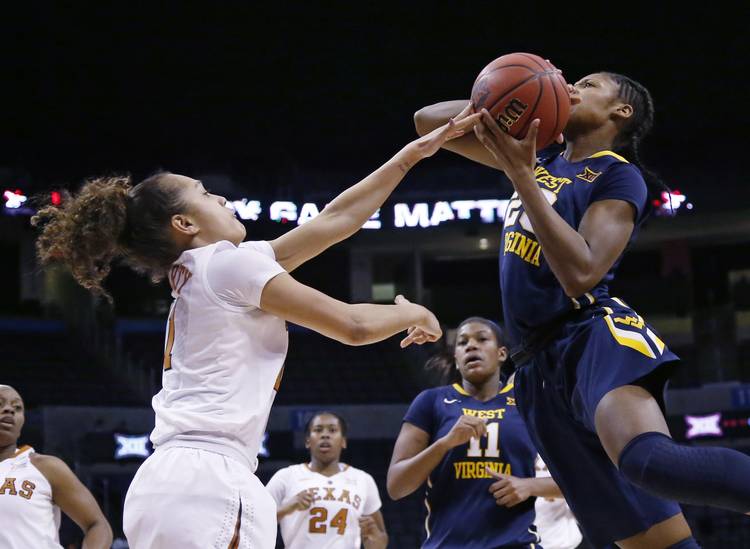 OKLAHOMA CITY — Texas has earned an opportunity to reach one of its preseason goals — winning the Big 12 women’s basketball tournament for the first time since the 2002-03 season.

The Longhorns reached the championship by playing one of their best games of the season — for three quarters, that is — in a 67-51 victory over West Virginia Sunday afternoon at Chesapeake Energy Arena.

Celina Rodrigo led the team in scoring for the second straight day with 12 points. Brooke McCarty and Ariel Atkins had 11 apiece, and Imani Boyette added 10.

“I love that (balanced scoring),” coach Karen Aston said. “When we play like that we’re a good basketball team. When we get two locked into trying to give the ball to one person we seem to stand around a lot.”

After West Virginia scored first on a three-pointer by Chiana Ray, Texas responded with an 11-0 scoring spurt. The Longhorns, who led for 38:30 of the game’s 40 minutes, swept the season series from the Mountaineers. Surprisingly, UT’s margins of victory in those three games were 11, 23 and 16 points.

“That shot seemed to give us a lot of energy going into the second quarter,” the 5-6 sophomore guard said.

Texas led by as many as 25 points late in the third quarter and early in the fourth. Staked to a 59-36 lead after three quarters, the Longhorns shuffled in new players down the stretch and scored just eight points in the fourth quarter.

“Give Texas credit,” WVU coach Mike Carey. “We didn’t handle the dribble penetration. We haven’t all year against them. They got into the paint, got our bigs in foul trouble. I thought we competed for about 5 minutes in the second half. And we can’t win games against a team like Texas not competing for forty minutes.”

West Virginia guard Bria Holmes, the team’s leading scoring with an average of 16.9 points per game, was limited to eight points on 3-for-12 shooting from the field. Texas limited the Mountaineers to 34 percent shooting, including 13 percent from behind the arc.

Texas shot 54 percent from the field in the first half to take a 38-23 lead at the break. The Longhorns would finished at 48 percent shooting.

Rodrigo and McCarty beat their defenders off the dribble consistently, finishing with point-blank shots by the basket. By contrast, the Mountaineers settled for perimeter shots, hitting just 3 of 23 from behind the arc.

As for Monday’s tournament championship, Baylor swept a pair of games from Texas this season, winning 80-67 in Austin and 74-48 in Waco last Monday. Baylor coach Kim Mulkey still considers the Longhorns a formidable foe.

“They have a lot of depth, guard depth, and when they get on a roll shooting threes, they’re as good as anybody you’ll face,” Mulkey said. “They’re young, and they have had success in trying to take their program in a different direction than it has been.”

Aston said her players are excited by an opportunity to snap their 13-game losing streak to the Bears. As for the upcoming NCAA, the coach said seeding for Baylor and Texas will not be affected by Monday’s result. BU has been projected to be a top seed for several months. Texas has been projected as a No. 2 seed.

“We’ve talked at length about trying to get Texas back to where we belong, and, you know, getting a chance to play for the tournament championship is a step in the right direction,” Aston said. “I would love to see our kids really compete. We haven’t competed against Baylor for 40 minutes…. We competed tonight, and that was important.”

Charlie Strong: Longhorns will go ‘as the quarterback goes’