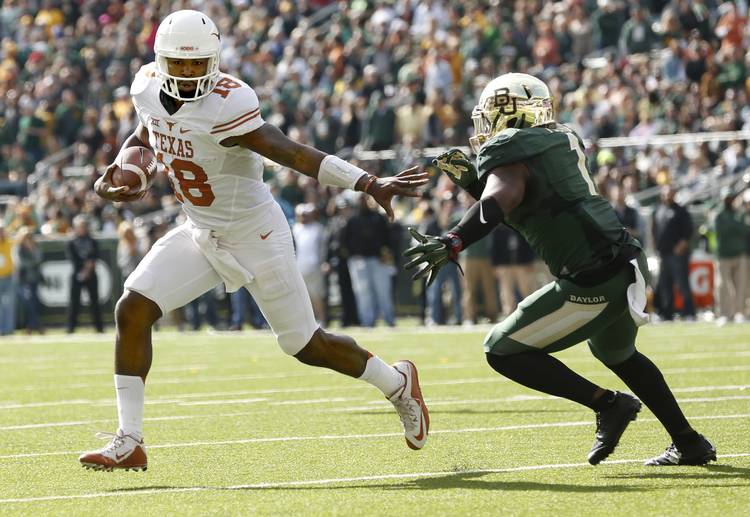 Texas quarterback Tyrone Swoopes scores a touchdown in the first half against Baylor's Taylor Young at McLane Stadium, Dec. 5, 2015. Texas led 20-0 at the half. (JAY JANNER / AMERICAN-STATESMAN)

Texas has serious holes along its defensive line, and there are questions as to who will emerge as a legitimate game-breaking playmaker.

But coach Charlie Strong admits there’s an even bigger issue going into his third season.

“The team is going to go as the quarterback goes,” Strong said Monday, just hours before the Longhorns’ first of 15 spring practices. “We have the numbers there. Now it’s about who’s going to step up and be that guy?”

For what seems like the umpteenth season, the Longhorns are searching for a clear-cut signal caller. New offensive coordinator Sterlin Gilbert may need only a week to figure out who has potential and who doesn’t.

Every quarterback has a clean slate, Strong said, as does everyone else on the offensive side of the ball. That includes bruising, beefy running back Chris Warren III, who has added 23 pounds, pushing him up to 255.

At the moment, the depth chart is simply based on seniority. That means Tyrone Swoopes, who will be a senior this fall, is first in line, followed by sophomore Jerrod Heard, redshirt freshmen Kai Locksley and Matthew Merrick and then Shane Buechele, who enrolled in January.

“If we feel like he can take us where we need to get to, we could play a true freshman at quarterback,” Strong said of Buechele.

Someone needs to emerge and help the Longhorns get back to their winning ways. Strong acknowledged his predicament.

“The seat’s always been hot since I’ve been here, huh? We need to win. Come on,” said Strong, a 55-year-old coach straddling the middle of a five-year guaranteed contract worth more than $5 million annually. Strong is 11-14 in his first two seasons. The Horns had not suffered back-to-back losing years since 1988-89.

Practice on Monday and Wednesday will be in shorts. The Horns won’t put on full pads until Friday. But everything is supposed to be done a notch faster.

Last season, former play-caller Shawn Watson promised a faster tempo. In reality, there were no real differences. Not so with Gilbert. It’s expected there will be wholesale changes, which should be noticeable even to a novice orangeblood.

“We did kind of restructure practice,” Strong said. “It’s going to move quickly, but we’ve got to make sure it’s organized and done the right way.”

The last three seasons, Swoopes completed 56.3 percent of his passes for 2,972 yards and threw 17 touchdowns along with 12 interceptions. Last year in his debut season, Heard threw for 1,214 yards and ran for 556 more.

Locksley is still an unknown quantity; he threw for 915 yards and five touchdowns as a high school senior in Baltimore. Merrick was rated the 30th-best pro-style quarterback prospect coming out of Irving Cistercian.

Buechele has the best credentials of the three younger players. He threw for 6,379 yards during his high school career and was 15th on the American-Statesman’s Fab 55 list.

By the spring game on April 16, Strong wants to have a clear-cut quarterback order going into the summer.

“I hope we’re not talking about it in the fall,” Strong said. “I hope by the end of spring, we can say, ‘I feel really comfortable with this guy.’ You’re just hoping that someone will rise up and become the guy there.”