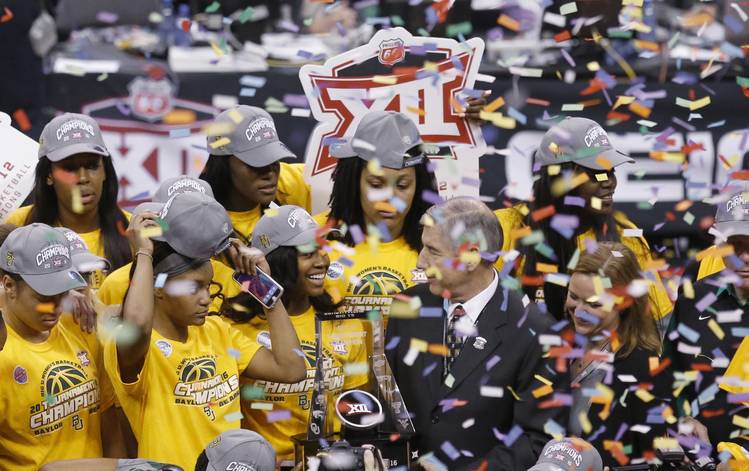 OKLAHOMA CITY — The gap is closing, but Baylor remains the class of Big 12 women’s basketball.

It was the second consecutive Monday that Baylor defeated Texas — the Lady Bears won 74-48 last week in Waco — but this game was different. Although the Longhorns lost their 14th straight to their biggest conference rival, they played Monday with fire and spirit that was missing in Waco.

“Our mindset (Monday) was to come out and compete,” said junior forward Kelsey Lang, who contributed 8 points and 4 boards. “We didn’t stop competing. I think we did stop when we played in Waco. Tonight, I think we competed for 40 minutes.”

Jones was joined on the All-Tournament team by Davis and Baylor point guard Niya Johnson. Texas was represented on the team by guards Brooke McCarty and Celina Rodrigo.

The seventh-ranked Longhorns (28-4) will learn their NCAA Tournament status when the seeding and pairings show is televised on Monday. ESPN bracketologist Charlie Creme has Texas as a No. 2 seed in the Sioux Falls, S.D., regional. Creme has Baylor (33-1) as the top seed in the Dallas regional.

Texas is expected to play host to first- and second-round games at the Erwin Center.

Coach Karen Aston said she was “extremely proud” of the Longhorns for winning 28 games.

“There is a standard that we’re trying to get to and hopefully we’ll learn some lessons and grow from this.”

Fourth-ranked Baylor looked like a Final Four-caliber team, shooting better than 50 percent from the field in all three conference tournament games. The Lady Bears led 16-13 after one quarter, 36-25 at halftime, and were not challenged in the second half.

Jones, who scored a season-high 29 points in BU’s victory over Texas earlier this season in Austin, hit perhaps the game’s biggest shot, an off-balance three-pointer as time expired in the half.

“I was just out of control on that offensive possession, but I didn’t want to miss that shot,” the transfer from Duke said.

Texas, which never led, showed some fight after trailing 12-3 midway through the first quarter. Freshman Lashann Higgs hit a pair of field goals to help the Longhorns outscored the Lady Bears 10-4 for the rest of the period to keep it close.

Higgs would finish with a team-high 15 points, her highest scoring output since she scored 17 in a Dec. 27 victory over Sam Houston State. On a positive note for the Longhorns, UT had a 35-8 edge on bench points.

The development of the bench is one reason the Longhorns expect to fare well in the upcoming NCAAs.

“We’ve won 28 games, so if you have a chance to win a couple games in the tournament, you get to 30 and that’s a great season,” Aston said.

Baylor, meanwhile, is optimistic about its road to the Final Four in Indianapolis. The Lady Bears will play host to a pair of games to open the tournament. They most likely will play the Sweet 16 round in Dallas, giving them an opportunity to advance to Indy without crossing the state border.

“We have one of the best fan bases in the country,” Davis said. “To know that we’ll play the first two rounds in Waco, and then allow our fans to travel down the street (to Dallas) with us, that’s going to be a great feeling.”

Several in the mix at center, but Patrick Vahe not among them