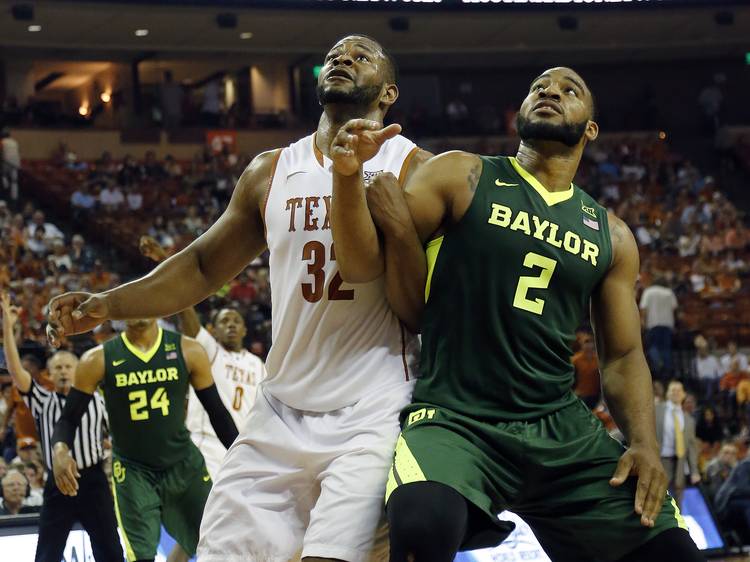 KANSAS CITY, Mo. — For those basketball simpletons who fill out brackets based on furry mascots, coin flips or whatever the office “expert” says, here’s a guide to Thursday’s Texas-Baylor matchup in the Big 12 tournament. These two hate each other.

“We’re, what, an hour and 10 minutes away?,” Baylor’s Rico Gathers said. “It’s definitely a rival. Private school vs. public school.”

Texas’ Connor Lammert just shrugged and said, “We have such lovable guys. I don’t know what’s not to love about us?”

The Big 12 tournament is must-see TV this year with six teams ranked in the current Associated Press Top 25 poll. The Texas-Baylor matchup at 11:30 a.m. Thursday is a dynamite way to kick-start the quarterfinals.

Both teams are headed to next week’s NCAA Tournament, so neither has a win-or-else edict here. The fourth-seeded Longhorns (20-11) split the regular-season series with the fifth-seeded Bears (21-10). “This will decide who wins the series,” UT’s Shaq Cleare said.

“You’re not going to get too much out of me, but definitely, our blood is pumping,” Baylor’s Taurean Prince said. “Like I’ve said before, there’s nothing new. They don’t like us, and we don’t like them. So it’s going to be a fun game.”

Texas showed excellent ball movement against Baylor’s zone defense in Waco. The Horns racked up 21 assists on 21 made field goals, a difficult accomplishment and one that UT hasn’t repeated since. Texas won that matchup, 67-59.

One of the most interesting moments came when Gathers shoved UT’s Prince Ibeh and knocked the 6-foot-11 senior to the floor. Sort of a love tap, if you will, from a 6-8 bruiser who will leave school and attempt to become an NFL tight end.

“He knew I wasn’t trying to bully him or anything,” said Gathers, who picked up a technical on the play. “It’s physical down in the Big 12. I just wanted to let that be known.”

The Feb. 20 rematch in Austin was a bonafide disaster. Texas opened the game with four turnovers, fell behind by 18 and suffered a rather humiliating 78-64 loss in front of a sold-out crowd.

Asked if that last meeting has been discussed inside the locker room, UT’s Kerwin Roach said, “Definitely.”

“Coach said, ‘I’m not showing this to bum y’all out. I’m showing you this to get angry,’” Cleare said. “It’s a 40-minute game with two teams that don’t like one another that much. So we’ve got to go out there and play.”

It’s unclear how much injured center Cam Ridley will play, or if he’ll play at all. Ridley, who suffered a fractured foot two days after Christmas, has missed the last two months.

He was cleared to begin running and jumping on Monday. He did exactly that in limited fashion during the team’s 40-minute practice session Wednesday at the Sprint Center. The Longhorns then left the arena and went to the University of Missouri-Kansas City campus for a private workout that was not open to reporters.

In one drill, Ridley ran the length of the floor, caught the ball on the block and threw down a two-handed slam. But he mostly stood off to the side while Ibeh and Cleare scrimmaged.

“He’s feeling the soreness of a guy who hasn’t really run and jumped in 10 weeks,” Smart said. “But his foot has responded well.”

Who knows how Ridley would feel once he got into the game and adrenaline started pumping. This series tends to get a lot of people worked up, for all sorts of reasons.

“We probably could’ve played this game down in Texas and had the winner come up,” Baylor coach Scott Drew said. “But we’re excited about the opportunity.”

Longhorns Class of 2016: There’s nothing lil’ about Lil’Jordan Humphrey’s ability