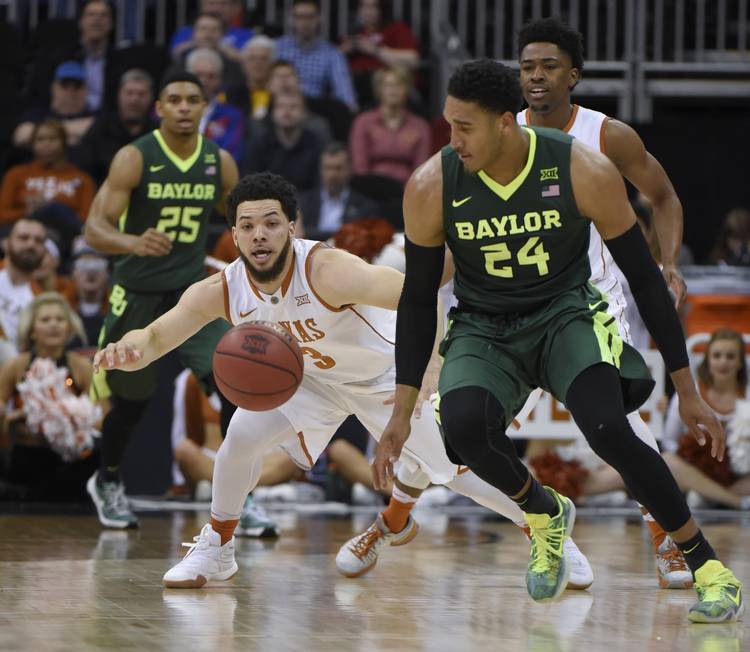 Texas guard Javan Felix and Baylor's Ishmail Wainright chase down a loose ball in the first half during the quarterfinals of the Big 12 Basketball Tournament at Sprint Center on March 10, 2016 in Kansas City, Missouri. (Photo by Ed Zurga/Getty Images)

KANSAS CITY, Mo. — Inside a half-empty locker room, Texas center Shaq Cleare put on black socks, looked up and summarized what probably all Longhorns felt after Thursday’s 75-61 loss to Baylor.

“We should be angry right now,” Cleare said after 23rd-ranked Texas got bounced from the Big 12 tournament.

“I’m really pissed off right now, because I know how hard we worked,” he said. “The preparation that goes into this is extremely tough. To play with that level of attitude and enthusiasm, that wasn’t Texas, man.”

Across the room, senior Demarcus Holland leaned forward and said UT coach Shaka Smart had a direct and damaging post-game assessment. “We were basically hypocrites,” Holland said. “We didn’t follow what we say we wanted.”

There are numerous reasons why the Longhorns (20-12) are headed home after their first one-and-done showing at the league tournament since 2005. Pick your poison: Poor shooting (38.3 percent), missed free throws (10 of 19) or getting blasted on the boards (46-27).

Texas will have to wait until Sunday afternoon to learn its NCAA Tournament destination. There may be some real soul searching during that time, especially among the team’s five seniors.

Guard Javan Felix said bluntly, “We just need to get better on defense.”

Too many times this season, Smart has said the players get “bummed out” when shots aren’t falling. What happens on the offensive end affects the energy level on the defensive end. “Unfortunately, it’s a pattern that we have yet to break,” Smart said.

Another disturbing pattern is Texas’ knack of peaking in February and then slowly descending into March, when the games are most important. It was thought Smart had broken that trend.

Texas had a four-game winning streak from Jan. 26 to Feb. 6. Then came back-to-back difficult road losses, though the Horns closed the regular season with four wins in their last six games. Those two losses were against Baylor (14 points) and Kansas (30).

This wouldn’t be an issue had Texas played well at Sprint Center. But Baylor’s Taurean Prince had a game-high 24 points and the Bears (22-10) held a double-digit lead for most of the second half.

“You’ve got to get stops. You can’t trade baskets,” Holland said. “When we stated to make some kind of scoring run, we were still trading baskets some. That’s why we couldn’t chip away at the lead.”

The Horns got a pre-game jolt from injured center Cam Ridley, who was cleared to play for the first time since fracturing his foot on Dec. 27. However, he played only two minutes as Smart said the big man was “feeling a little bit of pain” at halftime.

“I feel all right,” Ridley said. “That’s just the part I have to get over, the mental side of it. I haven’t used the whole leg for two months. It’s difficult to get back to what you were doing.”

Guard Isaiah Taylor said he wasn’t bothered by plantar fasciitis, either. It’s been nagging his right heel since January and got worse after the win over No. 3 Oklahoma on Feb. 27.

Taylor had nine assists against Baylor along with eight points. This is an electric scorer who put up 35 against Texas Tech, 28 against Iowa State and averages 15 for the season. If he can’t score next week, the Horns are in trouble.

Then again, shots weren’t falling for others, either. Taylor, Holland and Kendal Yancy all missed open reverse layups at various points. Prince Ibeh couldn’t finish off a dunk over Rico Gathers. Overall, Texas was 5 for 16 from 3-point range.

On the other end, the Bears scored in transition (12 points off fast breaks), scored in the paint (34 points) and had 15 more off second chances.

“It was really disappointing for our team because we felt like we had a great opportunity to advance,” Smart said. “But here we are.”

The time for learning lessons is over. Either the Horns come ready to play next week or it’ll be an equally short trip to the national stage.

“Well,” Holland said, “we’ve only got one more chance from here on out.”