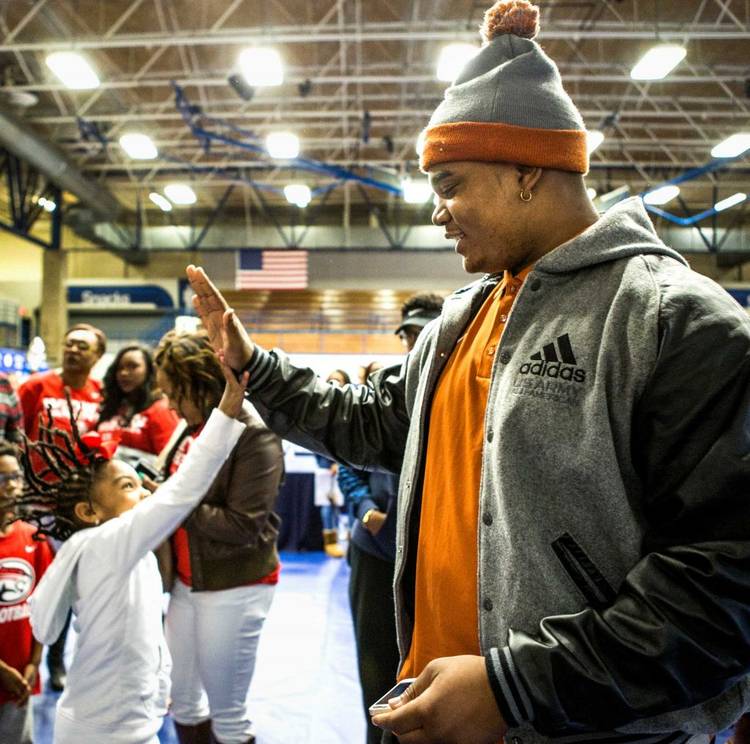 HOUSTON — According to a source familiar with the situation, Jim Harbaugh is a snorer.

The Michigan coach, making his rounds to see the top prospects in the Houston area before national signing day, pulled up to the home of four-star defensive tackle Jordan Elliott after midnight and plopped down on the living room coach and fell asleep.

Others in the house weren’t so fortunate.

“He’s a loud snorer,” Elliott said. “I could barely sleep.”

It wasn’t the first time Elliott tossed and turned trying to make his college decision. Throughout the past year or so, Elliott was committed to — in order, Baylor (for two months), then Houston (for three-plus months), then Texas (for five months, but silently) and Michigan (two months). The Houston Westside star ultimately signed with Texas, though, and will report to Austin this summer.

Somewhere along the way, Elliott declared USC as his top school. He took an official visit to Nebraska, and made plans to visit LSU but never followed through.

The wind was blowing in many different directions for Elliott, who admits he was “emotionally unstable.”

“I made some mistakes,” Elliott said. “I had to learn from them.”

Pressed up against the Feb. 3 signing day deadline, Elliott put an end to the mercurial ride and chose Texas, much to the delight of his mother, Tamara Dean, who admitted she had grown “tired” of her son’s indecisiveness. Given a do-over, she wishes she had more strongly discouraged him from making his earlier commitments. At his signing day press conference, Longhorns coach Charlie Strong recalled a playful conversation he had with Elliott when he asked “you are for sure now?”

“I learned a lot about him,” Dean said of her son. “He gets a little anxious and a little bit impulsive at times.”

But Elliott gets a pass, at least from Texas, which counts him among its top gets in a 24-man class that ranked 11th nationally. Strong desperately needed to add some beef on defense, and in Elliott, the Longhorns landed the most coveted of their five new defensive tackles. Once he gets to campus this summer, Elliott, the state’s No. 10 player in the American-Statesman’s Fabulous 55, will rely on his massive 6 feet, 3-inch, 322-pound frame to fight for reps with veterans Paul Boyette, Poona Ford and Chris Nelson, and newcomers Marcel Southall, Chris Daniels, Gerald Wilbon and D’Andre Christmas-Giles.

“Explosive,” Westside coach Jomaul Mason said. “One of the best first steps I’ve ever seen, and for a big kid, he sure does get off of the ball and get after you.”

Thus, it’s of little wonder Elliott pulled in more than 75 scholarship offers and had coaches inviting themselves over for sleepovers and baking Elliott birthday cakes, which Harbaugh also did and posted to Twitter on Nov. 24.

Elliott’s profile is the eighth in our series highlighting the Longhorns Class of 2016. To catch up on the rest of the series, here’s an interactive map of Texas’ recruiting class of 2016.

In eight games as a senior, Elliott recorded 30 tackles, 10 tackles for loss, four sacks and three passes batted down. He was selected to play in the U.S. Army All-American Bowl in San Antonio where he assisted on one tackle, and when the game was over he handed off his cleats — size 13s — to a lucky kid in attendance.

As signing day approached, Michigan was Texas’ only real challenger for Elliott, which made for an 11th hour battle between the quirky Harbaugh, who accompanied Elliott to Chick-fil-A for breakfast after the sleepover, and the introverted Strong, who made a lasting impression during a visit to the family’s home by striking up a conversation with Elliott’s great-grandmother about Western films.

“They were saying names I’ve never heard of,” Elliott said.

The moment that changed Elliott’s thinking and flipped momentum to Texas came on Martin Luther King Jr. Day — about three weeks before signing day — when Dean spent the morning scouring the Internet and came across a UT hype video in which defensive coordinator Vance Bedford waxes poetic about Strong and the program’s impending turnaround.

Elliott had already soured on Texas, telling his mother he no longer felt the same way about the program after taking an unofficial visit for the Kansas game on Nov. 7. He de-committed, rescinding his pledge from the summer that, because he didn’t want to advance his reputation as a flake, he chose to keep quiet.

But on MLK Day, his mom had something of a dream, and it involved Elliott playing at Texas.

“I called him downstairs and said, ‘I’m just not feeling 100 percent about Michigan,’” said Dean, an assistant principal at a middle school.

Dean won’t go into specifics, but she said she then asked Elliott a question that helped crystallize his decision.

“It dealt more so with Coach Strong and who he is as a person, so I just felt the nurturing would be better for him at UT,” Dean said. “Once he gets there, who’s going to be more patient, more willing to work with him?”

Four days later, around the time news broke that Harbaugh was pulling scholarship offers from several recruits who had been committed to Michigan, Elliott was on campus at Texas for an official visit.

“My son’s 18, a big, huge guy, but he still has a lot of maturing to do,” Dean said. “He doesn’t know how to tell people no. In this business, you can’t please everyone. You have to do what’s best for you.”

Shane Buechele impresses in 11-on-11 drills