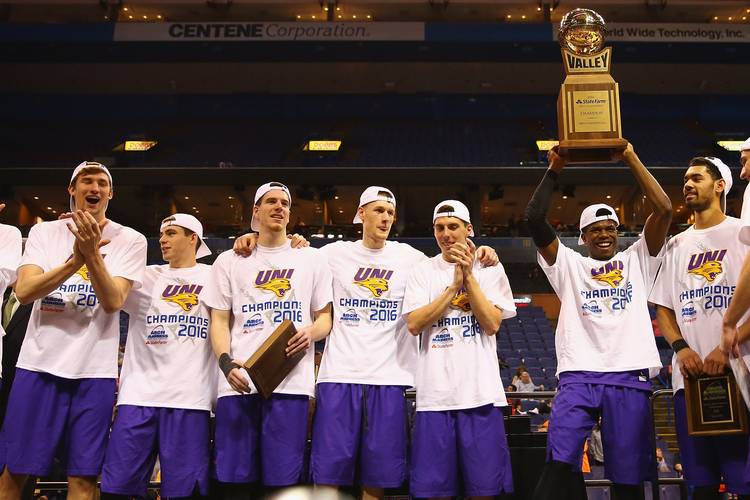 Northern Iowa celebrates after winning the Missouri Valley tournament championship. Northern Iowa will face Texas in the first round of the NCAA Tournament at approximately 8:50 p.m. Friday in Oklahoma City. (Photo by Getty Images)

Any Texas basketball fan obsessing over that delicious second-round matchup against Texas A&M in the NCAA Tournament should remember what happened last season in Pittsburgh.

A team with a clear height advantage and a slight edge in Vegas was caught flat-footed and totally out of sync en route to a 56-48 loss against Butler. The Longhorns were told to pack, get back to the airport ASAP.

They opened the NCAA Tournament on Thursday morning and were home by dinner.

“It really hit home with us when we saw (senior) Jonathan Holmes down and crying in the locker room,” Texas junior Kendal Yancy said. “It was devastating.”

On Sunday, the Longhorns said all the right things once the 68-team bracket was unveiled. Yes, players swear, No. 6 seed Texas is solely focused on No. 11 Northern Iowa, the Missouri Valley tournament champion that won 12 of its last 13 games.

No. 3 seed Texas A&M, which is playing Green Bay in its West Region opener, will have to wait. If the Longhorns and Aggies collide in Oklahoma City, it’ll be terrific, for sure. But first come the Panthers (22-12).

The A&M-Green Bay matchup is scheduled to tipoff at 6:20 p.m. Friday. The Texas-Northern Iowa game will begin 30 minutes afterward, which could be close to 9 p.m. at Chesapeake Energy Arena.

“Well, we won’t be home by dinner. I can promise you that, baby,” a loose, upbeat Smart said. He was clearly energized by seeing Texas’ name on the big screen.

“It’s March. We’re in the NCAA Tournament. As a team you have to step forward and stick your chest out and say, ‘We can do this,’” Smart said. “If we can’t do that, then whether the game’s at noon or whenever, it’s going to be a short stay.”

The Longhorns had barely unpacked last week in Kansas City before getting knocked out of the Big 12 tournament. Baylor simply blitzed Texas, built up a double-digit lead and cruised to a 75-61 win in the quarterfinals.

Immediately afterward, UT senior Demarcus Holland said Smart accused the team of being hypocrites. The players say they want to win and do all that’s required to win, Smart said, but they didn’t follow through.

The Horns held a team meeting on Friday, and Smart said, “I asked our guys to call each other out.”

Holland said the Horns want to lay everything on the table, regardless of the opponent. For five seniors, it’s literally now or never.

Guard Isaiah Taylor, who is bothered by plantar fasciitis, was asked if fans will see him go 100 percent on Friday. “I think you will. My blood’s gonna be boiling,” Taylor said.

Will that heel be boiling as well? “I think so,” he said with a laugh.

Center Cam Ridley went through three 10-minute workout sessions on Saturday. His status is still unclear. Ridley played only two minutes against Baylor, and trainers shut him down after Ridley reported feeling slight pain in that previously-fractured foot.

Northern Iowa is not exactly foreign to Smart and his coaching staff. While at Virginia Commonwealth, Smart coached the Rams against the Panthers the last two seasons and went 1-1. Smart said left-handed point guard Wes Washpun is “a bear driving the ball and using pick-and-roll.”

So forget the Aggies, at least for now, the Longhorns said.

“Everybody’s going to be looking forward and looking ahead to A&M and stuff like that,” UT senior Javan Felix said. “But that’s them. We need to leave them be and let them talk about that. But that’s definitely not what we’re going to let go on around here.”