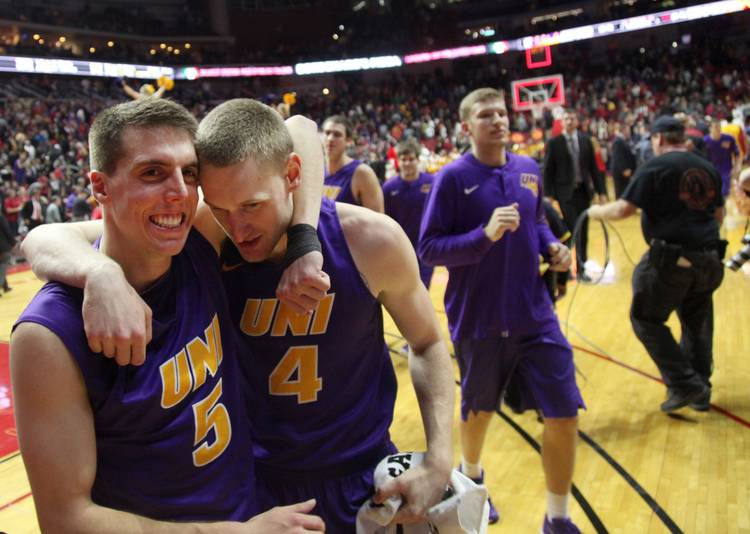 Texas coach Shaka Smart believes the NCAA Tournament is tailor-made for those who can “stick your chest out and say, ‘We can do this.’ ” Northern Iowa has earned the right to flex, too.

The Panthers may play in the Missouri Valley Conference, but they knocked off some name-brand opponents this basketball season.

“The confidence that comes with playing in those basketball games,” Jacobson said Monday, “I think that paid off for us big time.”

In the days leading up to the Texas-Northern Iowa matchup on Friday, expect to hear a lot about those two titanic wins for the 11th-seeded Panthers (22-12). And TV officials love replaying Wes Washpun’s long buzzer-beating jumper to beat Evansville and clinch the Missouri Valley tournament title.

You probably won’t hear much about UNI’s midseason tail spin that saw the team lost six times in a seven-game span, a slump that almost ruined the entire season. Those losses are a key reason why UNI goes into the NCAAs ranked 70th in RPI; Texas is 27th.

Consecutive January losses to Indiana State, Loyola, Wichita State and Illinois State forced Jacobson to rethink everything. In those four losses, UNI shot 29.7 percent from 3-point range and had a minus-35 rebounding deficit.

“We know how good we can be, how good we can play,” Washpun said at the time, according to the Cedar Rapids Gazette. “We need to break through our slump here and carry on through to February.”

So how did the Panthers win 12 of their final 13 games? Jacobson said the team’s top seniors, Washpun, Paul Jespersen and Matt Bohannon, started playing better. None of these guys kills you with numbers; Washpun is the team’s leading scorer at 14.3 points per game. Nobody averages more than 5.1 rebounds per contest.

Northern Iowa, which runs a motion offense based on cutting and screening, doesn’t have great offensive-efficiency numbers, according to analytics on KenPom.com. The Panthers are terrible at offensive rebounding, too, getting just 5.4 boards on their end per game.

But UNI turned its season around by playing suffocating defense.

In the past 13 games, the Panthers’ opponents scored only 56.4 points on average and shot a pedestrian 38.3 percent. UNI also became better at harassing shooters at the 3-point line, as opponents shot only 28.4 percent from behind the arc.

“The leadership we’ve gotten from our seniors, that’s what really got us out of it,” Jacobson said.

Said Smart of Jacobson: “Just from the outside looking in, you can tell there’s a genuine connection with his players. He cares about those guys; they care about him. They want to play extremely hard for him.”

Once Northern Iowa’s defense tightened up, the wins came in waves. A six-game winning streak helped UNI finish fifth overall in Missouri Valley play, but the Panthers had found their confidence again.

All three of UNI’s Missouri Valley tournament wins came down to the final minute. The Panthers hit six free throws in the final 28 seconds to beat Southern Illinois. Jeremy Morgan hit a key 3-pointer with 1:18 left in overtime to help beat Wichita State. And then came Washpun’s title-winning shot against Evansville.

“The best part of it is we’re playing really good basketball right now,” Bohannon told the Des Moines Register. “We’re excited for our matchup (against Texas) and we believe. More than anything, in March, that’s all it takes.”

Not only do the Panthers feel bullet-proof, they’re headed back to Oklahoma City, the site of a 2010 NCAA Tournament victory over Kansas that sent them to the Sweet 16.

“Part of winning close games is believing in who you are and believing that you’re going to do well,” Jacobson said. “Going through that tough stretch in January, this group has earned the right to believe they’re going to win. That, to me, has been fun to be a part of.”

No. 2 Texas A&M up next for struggling Longhorns