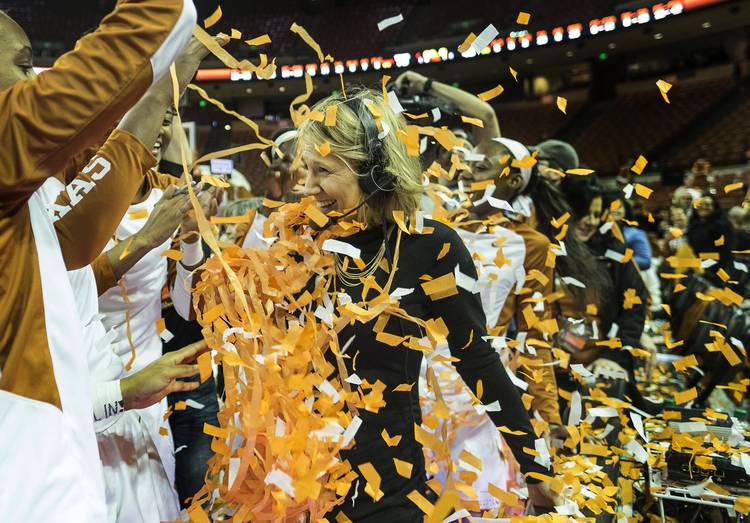 January 27, 2016 - Texas head coach, Karen Aston, center, has confetti and streamers dumped on her head by players as she does an interview as the team celebrated the program's 1000th win at the Erwin Center in Austin, Texas, on Wednesday, Jan. 27, 2015. Texas women's program is the 5th team to reach the 1000 milestone. Texas defeated Kansas 74-46. RODOLFO GONZALEZ / AUSTIN AMERICAN-STATESMAN

If Texas takes care of business at home, the Longhorns’ potential journey to the Final Four of the NCAA Women’s Tournament will take the Longhorns through Bridgeport, Conn.

Before the Longhorns can look ahead to the Sweet 16, though, they will have to win a pair of games at the Erwin Center. Texas opens the NCAA Tournament against Alabama State at 8 p.m. Saturday. If the Horns prevail, they will play either BYU or Missouri on Monday.

“We need to take care of our own business at home before we start worrying about the next round,” Texas coach Karen Aston said. “The players need to enjoy this because they put so much effort into this season. This shows that we have become one of the top programs in the country.”

“Hosting just shows that we’re on the right path to bring back women’s basketball with prominence back to Austin,” senior center Imani Boyette said. ”It’s fun and it validates all our hard work this season.”

Texas has posted one of the finest regular seasons in program history, notching a 28-4 overall record and a 15-3 mark in Big 12 Conference play. The Longhorns have recorded their most overall victories since the 2003-04 season and tied the 2002-03 club with the most Big 12 Conference wins (15) in school history.

Earlier Monday, the Texas women’s program reached a historic milestone in the Associated Press poll. The Longhorns have made 500 all-time appearances in the AP poll for women’s basketball since it began in 1976.

Texas, which ranks seventh in this week’s AP poll, has joined Tennessee and Georgia as the only women’s basketball teams to appear in the weekly poll 500 times.

No. 2 Texas A&M up next for struggling Longhorns