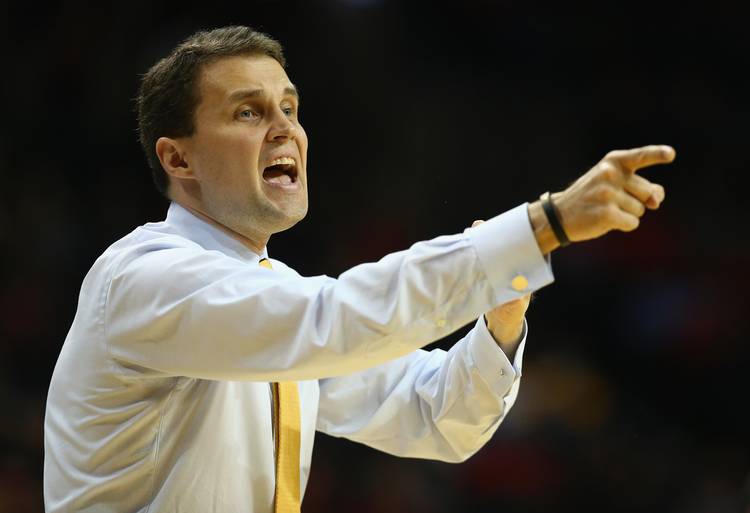 First-year coach Will Wade led VCU to yet another 24-win season in his first year replacing Shaka Smart. (Photo by Getty Images)

The pressure riding on the Virginia Commonwealth athletic director’s shoulders had to be immense last April when it came time to find Shaka Smart’s successor after the most successful coach in VCU history took off for Texas.

McLaughlin chose Chattanooga’s Will Wade, one of Smart’s former assistants at VCU, to take over a program with a rabid fan base, a long home sellout streak and sky-high expectations. No pressure. Right, coach?

McLaughlin deserves a well-earned victory lap around the court. He led the Rams to their sixth straight NCAA Tournament appearance and first Atlantic-10 title since 2009. The No. 10-seeded Rams (24-10) face No. 7 Oregon State at 12:30 p.m. Friday.

“There’s a lot of pressure,” McLaughlin said. “When we were 5-5 after the Cincinnati game, Will and I were sitting in the video room after the game and I said, ‘We’re this close. I believe it, and you believe it.’ Will said, ‘We might be the only two who do.’

“Hey, that’s the truth. There was a lot riding on it.”

Texas fans were downright giddy when former athletic director Steve Patterson reeled in Smart. But VCU fans were probably aghast at their future.

VCU’s leading scorer Treveon Graham and defensive superstar Briante Weber ran out of eligibility. Promising freshman Terry Larrier, who averaged 6.6 points in 18.5 minutes, abruptly transferred to Connecticut. All three recruits who signed with VCU under Smart backed out and went elsewhere, including guard Tevin Mack, who landed in Austin.

“We lost that — plus our coach,” McLaughlin said.

Despite all those defections, Wade had to keep the 7,637-seat Siegel Center full. The school opened a $25 million practice facility in November. Smart was instrumental in helping that building become a reality.

“There is a lot of pressure at VCU,” Wade said. “Coach Smart raised the stakes of what we’re doing and what VCU sees itself as, not only as a basketball program, but as a school. I mean, we’re growing in all facets.”

Still, the Rams were picked a mediocre fifth in the A-10 preseason poll. “I think it was because of the coaching change,” said guard Korey Billbury, who was recruited and signed by Wade. “I definitely think that was the after-effect of Shaka leaving.”

After the 69-63 loss to No. 23 Cincinnati on Dec. 19, VCU found its mojo and ripped off 12 straight wins. Wade slowed the team’s overall pace compared to Smart, but the Rams stuck with their trademark man-to-man defense.

VCU’s sellout streak has now reached 83 consecutive games. The Rams are conference champs and one of only two Division I schools with at least 24 wins for 10 straight years. The other? No. 1 Kansas.

Senior Melvin Johnson, averaging a team-high 17.4 points, defiantly said he didn’t feel anything when he realized VCU would be at the same sub-regional as Texas. “Nah, nothing at all. It’s college basketball, it’s a business,” Johnson said.

Junior Mo Alie-Cox said, “Yeah, what Mel said. We haven’t spoken to Coach Smart. No communication has been made.”

But pressed further, Johnson revealed that VCU players essentially felt disrespected by being picked so low during the preseason and considered to be roadkill after Smart left town.

“Of course the coaching change meant a lot, because Coach Smart is a heck of a young coach,” Johnson said. “We knew that would be a big reason why everyone doubted us.”

Smart said if any VCU player did contact him, he was respectful and told the Rams to defer to Wade.

“I was just hoping that we didn’t play ‘em (in the NCAAs),” Smart said. “I kind of thought that could be coming, and that would’ve been really odd.”

Smart will face his old team at some point, probably long after the roster as turned over. As part of Smart’s buyout agreement, the Longhorns were contractually obligated to play a home-and-home series against the Rams in the future.

For now, McLaughlin’s just happy to be back in the NCAAs. His gamble on Wade has paid off.

“For our fans, this was a big year,” McLaughlin said. “It’s a validation for our guys. To me, that was the special part.”

Baseball notebook: A Texas starter will transition to closer — just not yet