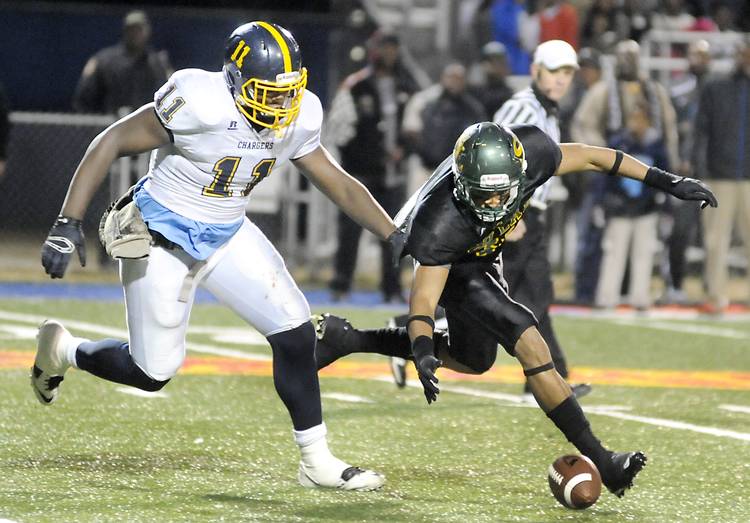 BATON ROUGE, La. — Madison Prep football coach Mike Roach grew up poor and didn’t venture much beyond Baton Rouge’s borders, so he decided that once he had the means to do so, he’d raise his kids to be globetrotters.

His second son, Malcolm, a high school senior who will play the Fox linebacker position at Texas this fall, has been to the Bahamas and to Jamaica and to the White House and to the Tonight Show in New York.

That’s a whole lot of sight-seeing for someone who has yet to celebrate his 18th birthday.

Yet Roach’s favorite destination didn’t involve sand or celebrities or broadening his palate with foreign fare. It was the bold move he made leaving Louisiana football power Southern University Lab to enroll at Madison Prep Academy, whose football team was anything but a power entering its first varsity season in 2013. The schools are separated by five miles and four state titles.

Mike Roach was hired to coach the team and reluctantly brought along his son, who had made all-state as a freshman at Southern Lab.

“We were horrible,” said Mike Roach, who has coached in college, including a stint as Alcorn State’s defensive coordinator. “We just didn’t know about winning. That was the first time I ever questioned my decision making — if I should have transferred my son.”

Roach’s profile is the 10th in our series highlighting the Longhorns Class of 2016. To catch up on the rest of the series, here’s an interactive map of Texas’ recruiting class of 2016.

If Malcolm can do in Austin what he helped create at Madison Prep, Longhorns fans will be beaming. After a sad sack 4-6 season that Roach likened to the Bad News Bears, the Chargers got to work, winning 10 games in year two and advancing to the state semifinals, where they fell to Roach’s old teammates at Southern Lab. Success continued this past fall when Madison Prep ripped off 11 wins to start the season before falling in the D-III state quarterfinals on a blocked extra point with seconds remaining.

Home games became gathering spots for the low-income community on Baton Rouge’s west side. Each week, the school would put leaflets in mailboxes encouraging citizens to come out and support the team and participate in the pre-game Charger Walk. Attendance hit 9,000. A disc jockey kept the crowd engaged.

Roach, who ended up becoming a four-time all-state selection in Louisiana, said taking a chance on Madison Prep “was the best decision I’ve made in my life.”

His senior stats were outrageous — 143 tackles, 14.5 sacks, 26.5 tackles for loss, two interceptions, five forced fumbles, five pass breakups, 20 hurries and two blocked punts. He moved around on defense, switching from middle linebacker to defensive end so that opponents couldn’t get too comfortable. Yet his influence on the program transcended Friday night contributions; Roach matured into a team leader, pushing others during 5 a.m. workouts. Among his teammates was Bryan Jones, a rangy four-star defensive end who Texas has already offered for its 2017 class.

“He became the face of the franchise,” Mike Roach said. “He set the tone for the whole program.”

The Roaches’ renovation at Madison Prep is not unlike the family’s real estate business. Since he was about 10, Malcolm has been operating power saws and building kitchen cabinets to help his parents flip houses. His brother, Mike, who recently finished his senior season at Grambling, did much of the same.

Before accepting Madison Prep’s offer to coach, Mike Roach requested and was granted a $30,000 workshop at the school in which he now teaches a couple of middle school woodworking courses.

Whether on the football field or in the shop, the Roaches don’t mind roughing up their hands and building things from scratch.

“Those were the last words I ever heard from them,” he said.

Roach said he thought about the slight and used it as motivation before every game of his senior season.

He won’t be sticking around Baton Rouge for the next four years. Then again, the plan all along was for him to get out and explore new places.

“I found a good fit with Texas and love it,” Roach said. “The best is yet to come from Malcolm Roach.”

For Horns, home’s where the early round games will be