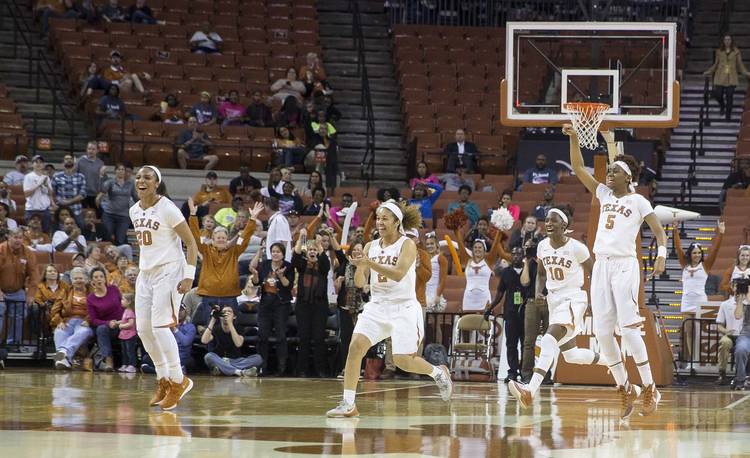 Texas plenty to celebrate at the Erwin Center this season, going 15-1 at home. Horns will play host to first- and second-round NCAA games. RICARDO B. BRAZZIELL/AMERICAN-STATESMAN

The Texas women’s basketball team worked all season long for the opportunity to play a pair of NCAA tournament games on friendly hardwood.

So no one was more thrilled than coach Karen Aston when the Longhorns were awarded first- and second-round games within the comforts of the Erwin Center. Texas is 15-1 at home this season — the lone loss coming to Big 12 champion Baylor — and is 44-5 on campus over the past three years.

There are no guarantees that the three visitors to Austin this weekend — Alabama State, Missouri and BYU — will see their seasons end here. Still, the NCAA decision reached in 2014 that allows the top-four seeds in all four regions to be host to early round games offers an obvious benefit to those teams that stay home.

“The players have worked the entire year to be able to do this,” Aston said Friday. “The last thing they want to do — and it happens to be the best of them — is to lose unexpectedly. I don’t think we’ve worked this hard to overlook anyone.”

Hoping to fill seats at early round games that had been vacant in previous years, the NCAA addressed the problem by allowing top-seeded teams to host those games. Also, more games have been scheduled for the weekend than in previous years.

Thanks their team’s No. 2 seed, seniors Brady Sanders, Empress Davenport, Celina Rodrigo and Imani Boyette will have at least one more home appearance in their UT playing careers.

“Hosting just shows we’re on the right path and we’re bringing back women’s basketball prominence to Austin,” said Boyette, whose next stop will be the WNBA. “It’s fun and it just validates all of our hard work this season.”

Second-seeded Texas (28-4) will get its first tournament test Saturday night against 15th-seeded Alabama State (19-11), the Southwest Athletic Conference tournament champion. Seventh-seeded BYU (26-6) and No. 10 Missouri (21-9) will open the Austin sub-regional at 5:30 p.m. Saturday.

The winners of those two games will meet on Monday for the right to advance to the Sweet 16 round in Bridgeport, Conn.

Last year, the Horns entered the tournament as a No. 5 seed, forcing them to play on the road at Cal-Berkeley for the first two rounds. Texas prevailed, beating host Cal 73-70 to advance to the Sweet 16. Attendance for the Texas-Cal game was 2,852. That might not sound impressive, but it was slightly better than Cal’s average home crowd of 2,453 in 2014-15.

In contrast, South Carolina, which has led the nation in NCAA Division I women’s attendance for the past two seasons, averaged more than 10,000 fans for its two early round home games in 2015.

“Their defense is really good, and they know how to win,” McCarty said.

This weekend will mark the first time Texas has been host to NCAA tournament games in Aston’s four seasons at Texas. After Texas posted a 12-18 record in Aston’s first season, her next three teams have gone 22-12, 24-11 and 28-4.

Sanders, a fifth-year senior who graduated in December, is eager to play before the home crowd again.

“We get to play on our home court and wear our home uniforms each game,” Sanders said. “The team has worked so hard and we definitely deserve to be in this position. … I can’t wait to see what’s in store for us.”