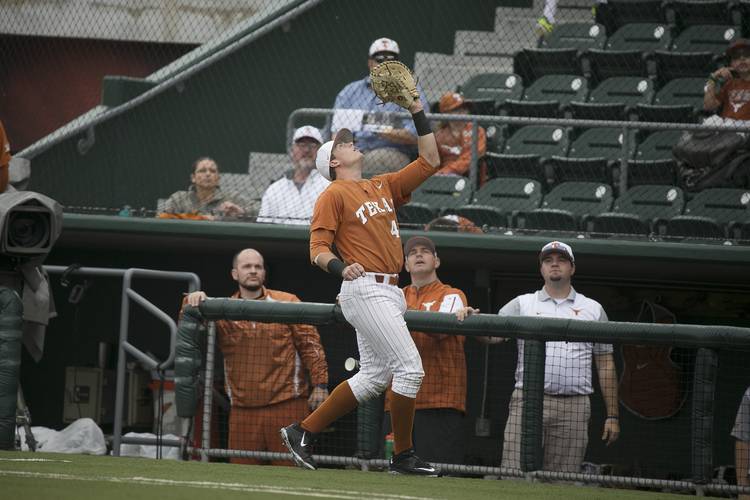 Think quick: who leads the Texas baseball team in RBI?

Once thought of of as a defensive specialist with minimal value on offense, Clemens is continuing to shed labels with a productive junior season at the plate. He broke open Saturday’s 10-3 win over Tulane with a bases-clearing double in the third inning, upping his RBI total to a team-leading 14.

His bat has been a pleasant boost for Texas, which split two games on the day and heads into Sunday with a chance to win a series for the first time since the opener against UNLV.

Over the two games, Clemens was 4-for-6 with two doubles.

“He’s been real consistent,” Longhorns coach Augie Garrido said of Clemens. “He’s been one of our better players.”

Tied 3-3, Clemens came up with the bases loaded and sent a shot over the head of left fielder Jarret Dehart for his team-high seventh double of the season. Clemens’ second-inning single marked the 16th game in a row he reached base safely. The streak began all the way back in the second game of the season.

“I didn’t really get many good pitches to hit today,” Clemens said. “I just hit the ones that were in the zone and luckily they fell in.”

This was an efficient effort for UT (8-11) which scored its 10 runs on 10 hits and had three innings of three or four runs. Clemens’ brother, Kody, drove in two runs, as did Joe Baker with a two-out double in the second.

Baker, who has been in and out of the lineup with injuries, did not finish the game after tripping over the foot of the first base umpire in the seventh. Garrido seemed confident Baker would be OK.

The win went to Ty Culbreth (3-2), who gave up three runs right off the bat in his first appearance since surrendering a walk-off home run to Texas A&M on Tuesday. He settled down, though, and kept Tulane (12-7) off the board over his final five innings of work. Culbreth struck out eight, giving him 37 strikeouts in 34 1/3 innings. Culbreth responded to the first two batters reaching in the sixth with a strikeout, a fly out, and another strikeout.

In all, it was a usual splendid effort by the senior lefty.

Blake Wellmann earned a three-inning save.

Garrido said that Kyle Johnson will start on Sunday. The belief is Johnston, who worked two innings and threw 31 pitches before Friday’s lightning storm, should be able to provide significant innings.

Tulane’s Alex Massey — the brother of game one winner Ross Massey — recorded just seven outs and gave up seven runs (six earned) before getting yanked in the third. He was chased by Clemens’ three-run double.

Though his team battled back to even the series, Garrido was still upset about the game one loss when UT had three consecutive 1-2-3 innings at the plate after Tulane took the lead with a two-run home run in the seventh.

Garrido said he took an “aggressive position” with the team between games, but did not elaborate.

“When we went behind by one run the quality of the at-bats diminished terribly,” Garrido said. “I’m bitterly disappointed that what we’ve been through with our schedule did not produce the kind of confidence in those situations I had hoped for.”

Near win is another close loss for Texas baseball team