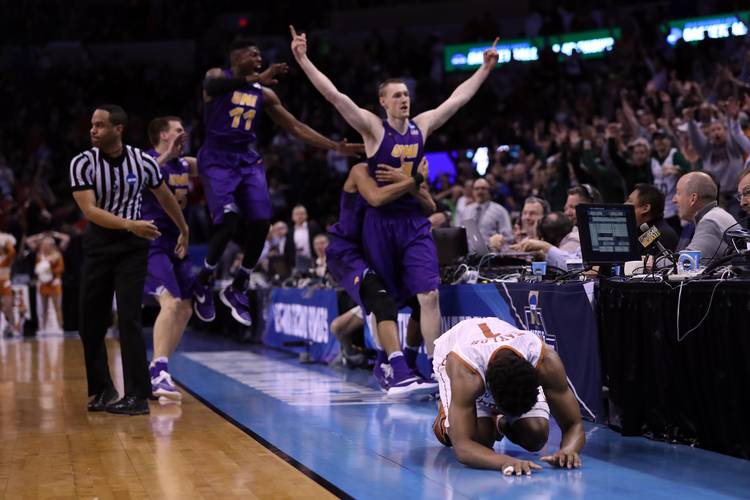 Texas guard Isaiah Taylor reacts after Northern Iowa's Paul Jesperson hit a half-court 3-pointer to win the game with a score of 75 to 72 during the first round of the 2016 NCAA Men's Basketball Tournament at Chesapeake Energy Arena on March 18, 2016 in Oklahoma City, Oklahoma. (Photo by Ronald Martinez/Getty Images)

OKLAHOMA CITY — Throughout his first season, Texas coach Shaka Smart had to constantly shake his players out of the doldrums whenever things went awry. They’d get “bummed out” too easily, Smart said over and over again.

Smart thought he broke them from that woe-is-me mentality, only to see the Longhorns struggle in late-season games against Kansas and Baylor.

Friday night was different. Texas fell behind by 16 points against Northern Iowa in the NCAA Tournament. This time, instead of giving in, the Horns clawed their way back. Isaiah Taylor tied things up with 2.7 seconds left, and things were heading toward overtime at Chesapeake Energy Arena.

Then Paul Jesperson unleashed a desperation half-court heave you’ve seen countless times before. Most times, it never has a prayer. “All I remember was him gathering himself when he shot it,” UT’s Eric Davis said. “Please don’t go in. Please don’t go in.

Unbelievably, Jesperson’s runner banked in as time expired. The horn sounded, and the 11th-seeded Panthers went wild as Taylor crumpled to the floor. Other Horns just stood like zombies. It was the shot of the tournament, and one that sealed Northern Iowa’s 75-72 win.

What a bummer. Instead of facing Texas A&M in the second round, Texas’ season is over. The Horns finished the year with a 20-13 record.

Connor Lammert, one of five Texas seniors who saw his career come to a painful end, appeared close to getting a hand on the ball.

“We surely didn’t want to foul,” Lammert said while holding back tears. “I wasn’t really trying to block it, because it’s not a high-percentage shot. But he made a good shot. These things happen. It sucks to have it happen to you.”

Smart just stood on the court with his hands on his head. “Jesperson kind of weaved a little bit, and when the shot left his hand, I didn’t know it was in, but it looked like it was a real chance,” he said.

Northern Iowa coach Ben Jacobson said, “Yeah, I mean, there is no way for me to describe what happened at the end.”

It’s the kind of shot teams usually work on during goof-off time at practice. “But I don’t think we’ve shot one of those this year,” an equally-stunned Jesperson said. “Just happy it went in.”

One shining moment, indeed. That shot earned instantaneous fame in both Northern Iowa and Texas basketball history. But as time passes, the Horns will lament letting five Panthers finish in double figures, including Wes Washpun, who had 17 points.

Washpun, a dangerous left-handed shooter, would have teammates set screens early in possessions to get a better individual matchup against a Longhorn of his choosing. Washpun’s layup in the first half gave UNI a 33-17 lead. He scored four more before halftime in the same you-can’t-stop-me fashion.

Texas cut the deficit to eight by halftime and came storming out of the locker room after the break. Javan Felix hit a 3-pointer, Lammert scored on a tip-in and Taylor hit a magical bucket and drew a foul.

Taylor missed the free throw, but the Horns corralled the rebound and senior Demarcus Holland drained a shot from downtown. That 10-3 run got the Horns within one, and Eric Davis’ 3-pointer finally gave Texas the lead with 14:02 remaining.

“The confidence level was high,” said UT’s Prince Ibeh, who had three blocks. “Yeah, we definitely played well enough to win. They just made one more shot than we did.”

It was neck-and-neck down the home stretch. Ibeh got fouled with 43.1 seconds left and hit one of two free throws, giving Texas a one-point lead. Klint Carlson drove around Ibeh for an easy layup with 26 seconds left. Washpun hit a free throw, and then Taylor hit one of his trademark floaters.

All that did was set the stage for Jesperson.

Asked if the final shot was like a punch to the gut, Felix said, “Yeah, that’s exactly what it’s like. It just hurts. Then you immediately start thinking about all the work you put in, all the time you put in the gym, the countless hours, all the time you spend you spend with your teammates, the game you play, everything. You just think about it ending right there.

Then, he added, “For it to just to end on a half-court shot, it just sucks.”

For Horns, home’s where the early round games will be

Even after heart-wrenching loss, Longhorns must ‘turn the page’