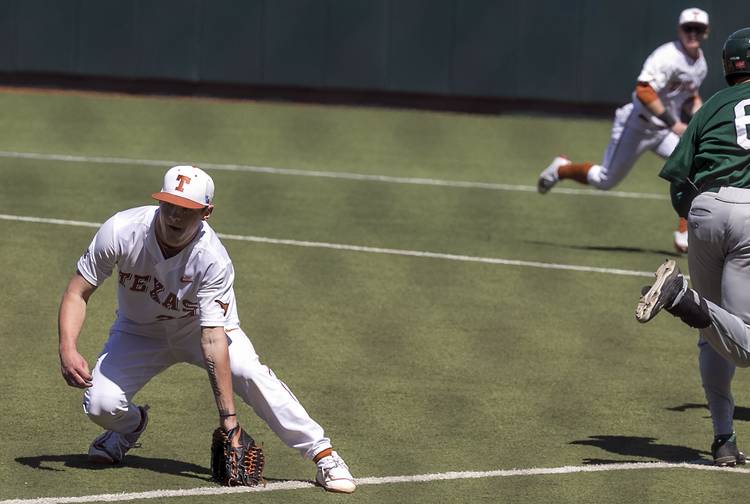 Augie Garrido could tell by the spin of the ball that it was rolling foul. So could his players, who were screaming from the Texas dugout for pitcher Chase Shugart to stay away from it.

If anyone has been paying attention to the Longhorns this season, it’s probably not a big surprise that the wrong decision was made. Shugart, a freshman reliever who has been scuffling of late, inexplicably fielded the bunt along the first-base line, which resulted in a Tulane player scoring from third for the go-ahead run in the eighth inning of its 5-3 series-clinching win.

“That’s just the inexperience of it all,” Garrido said. “(Shugart’s) been through a lot, and obviously his nerves are revealing his inexperience. We have a lot of that to go around. But you’re 20 games into this. Sooner or later, when do you get experience? Do you need 5,862 games to be able to say OK, now we know what to do?”

Garrido wasn’t thrilled after this one, nor should he be after his team lost its third straight series, this time to an opponent which is, let’s say, above average at best. Big 12 play begins this week, and Texas, which lost for the fifth time in six games, looks ill-equipped to take on league favorite TCU after committing three errors and getting another shaky outing from the bullpen. TCU is coming in hot after sweeping West Virginia.

Even Garrido admitted about his team, “they’re not confident.” He added that of UT’s 12 runs allowed in the series, mistakes have contributed to all but one of them.

“There’s no teams that are absolutely dominating us,” center fielder Zane Gurwitz said.

Shugart’s failed plays is symbolic of these first 20 games, in which the Horns (8-12) have, as Gurwitz put it, made “errors or bad decisions at the perfect time for the other team.”

Garrido went back on his earlier word that he would wait until there was a low-stress situation before giving Shugart, who got roughed up against Cal and UCLA, another late-inning chance. With the score knotted at 2-2, Shugart entered with one out and surrendered a single to put runners on the corners. Then, Lex Kaplan laid a bunt down the first base line as Jake Rogers took off from third. By the time Shugart fielded the ball, Rogers had scored. Shugart didn’t make a play at first.

“It was gonna be foul, no doubt,” Garrido said.

Later that inning, Shugart walked a batter with the bases loaded, and TU scored to go up 4-2. The Green Wave (13-7) added one more run in the ninth after jumping Shugart for three straight singles.

Asked why he went to Shugart in that spot, Garrido said because “he’s an extremely competitive guy.”

“He had the highest level of belief in himself when he got here,” Garrido said. “Where he is today, I don’t know. It’s been a rough road for him.”

Kyle Johnston made a rare second start in the series after working the first two innings of Friday’s lightning-struck game. He had excellent command, striking out eight in five innings, but got little help from his defense. In the first, a throwing error by Patrick Mathis gave a runner an extra base. In the third, two runs came after routine fielding errors by shortstop Bret Boswell and second baseman Jake McKenzie, who was filling in for the injured Joe Baker.

“We’re not playing our game,” Garrido said. “We’re not doing what we’re capable of doing, and we need to start over. Conference is starting next week.”