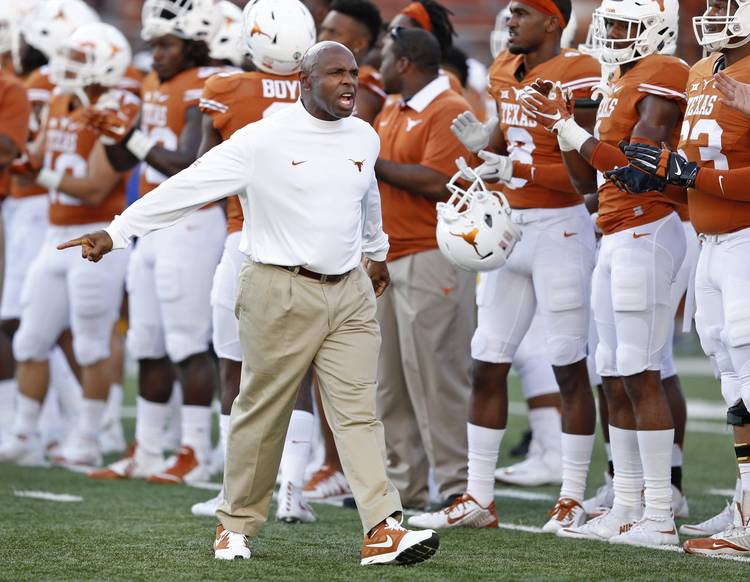 Strong touched on several program cornerstones, including the importance of academics and his appreciation of UT faculty members. The coach made it clear that all faculty members are welcome to attend practices, and that they should report when players miss class. A 5 a.m. running session awaits truants.

“You think about a degree from the University of Texas and how important it is,” Strong said. “For some of them, their parents didn’t have this opportunity. I tell them all the time, you’re not going to waste this opportunity.”

Strong then went into his usual breakdown of the roster. On the quarterback situation, he ranked the contenders as such: Tyrone Swoopes, Jerrod Heard, Shane Buechele and Kai Locksley. He wants someone to be a clear-cut winner going into the summer.

But Strong, who spoke with a tad more oomph than he normally does with reporters, is clearly excited about the recent recruiting class — ranked 11th nationally by 247Sports’ composite ratings — and what it may signal going forward. In his mind, back-to-back losing seasons are a thing of the past.

“They might as well move out of the way, because we are going to steamroll everyone,” he added. “That’s going to happen.”

The coach is clearly pumped about a rematch with Notre Dame this fall at Royal-Memorial Stadium on Sept. 3. The Irish walloped the Longhorns 38-3 in South Bend, Ind., last season.

“I love that we open with Notre Dame. I really do love that,” Strong said. “We were embarrassed up there last year. I tell our players all the time, what bothers me more than anything, when we get the support that we get, we go out and don’t play up to our ability. That’s what bothers me.

“We have so much support,” he added, “and there’s so many people who have so much passion for Texas football. There’s no reason for us to go let them down.”

Perrin on realignment: Speaking to faculty members after Strong, UT athletic director Mike Perrin addressed conference realignment for the first time publicly. He said the current stability is based on TV contracts, many running through the 2024-25 academic year.

“I think there will be another round of conference realignment when those contracts come up, because the funding model for conference monetary distributions are determined by in large by cable television,” Perrin said.

Perrin noted how news reports describe the growing trend of cord-cutting in U.S. homes as people shift to online streaming.

“Whether there will be similar ability to monetize alternative distributions, such as iPads and smart phones, I don’t know,” Perrin said. “I’ve got to believe that smarter minds than mine will figure out how to do that selling subscriptions or something.”

Briefly: Texas returns to the practice field on Tuesday, Thursday and Saturday. The team’s pro timing day for NFL scouts is scheduled for Wednesday.