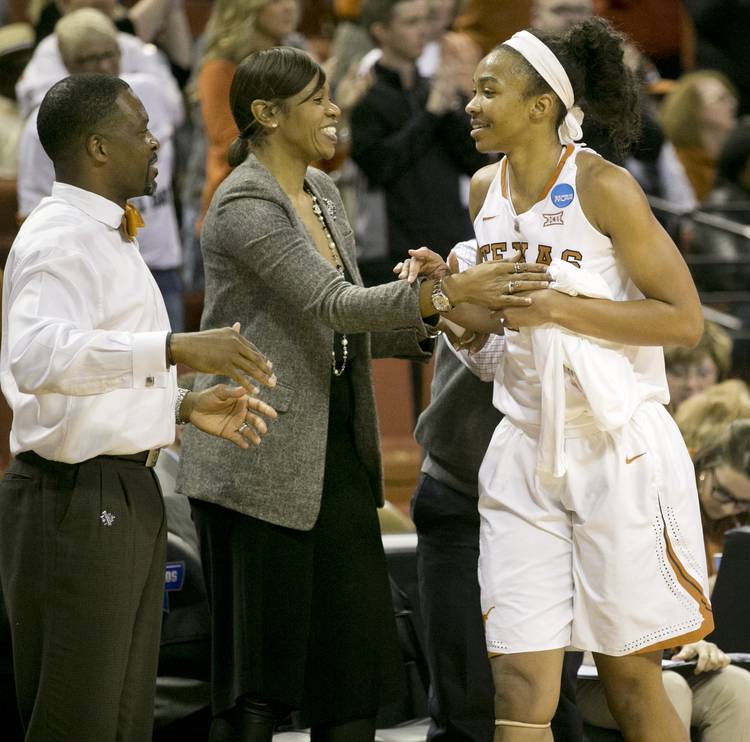 Tina Thompson considers Imani Boyette one of the most complex basketball players she has ever met.

Thompson, the former WNBA star who’s in her first season as a Texas assistant coach, casts a large shadow, even over Boyette, the Longhorns’ 6-foot-7 center. In turn, Boyette admits she challenges any coach aspiring to teach her the game. Yet their bond is sealed with mutual respect.

Texas meets UCLA on Saturday in the Sweet 16, and Boyette is one of the Longhorns’ key players. Thompson is proud to be coaching one of the best centers in college basketball. And Boyette is learning from someone who has pretty mean credentials — a former USC All-American, two-time Olympic gold medalist and the leading scorer in WNBA history.

“I was excited when we hired her because she has a lot of ‘now’ experience,” Boyette said.

Thompson, who retired three years ago, has basketball connections that might benefit Boyette, who’s looking forward to her first WNBA season this summer and aspires to be on the U.S. Olympic team in 2020 — “There’s no greater honor,” Boyette said, “than being able to represent your country and being among the 12 best players.”

Texas head coach Karen Aston hired Thompson this season despite the fact that the WNBA legend didn’t have much coaching experience. After her 17-year playing career was done, she volunteered to assist AAU teams from Houston when Aston called.

“Tina’s confident, compassionate and knowledgeable,” Aston said. “So I think anything you put in front of her, she’s very capable of handling.”

Thompson’s first assignment: Help Boyette — who was an All-Big 12 selection last year after when she led the team in blocked shots and shooting percentage, was No. 2 in rebounds and No. 3 in scoring — become a complete player. This year, both her scoring (11.3) and rebounds (9.0) averages are up, she was named the conference’s co-defensive player of the year, and moved into the No. 2 spot on UT’s career blocked shots list.

So, what makes their working relationship challenging? For starters, Thompson said Boyette thinks like a chess player, always searching for moves that haven’t developed yet.

“Players like that can sometimes be a pain in the behind for coaches,” Thompson said. “She’s thinking too much, which isn’t always a bad thing. But sometimes I just want her to stay in the moment. It doesn’t bother me because I like the fact that she’s thinking. The fact that she’s challenging herself and us is a good thing, because I was that type of player. I wanted to know why we did things.”

Instead of thinking too far ahead, Thompson wants Boyette to be more instinctive. And Boyette plays with two entirely different mindsets, Thompson said. She’s supremely confident playing defense, but there’s still a lack of confidence on offense.

“I know that I can score, but I know for a fact that I can stop somebody,” she said. “That’s my mentality. I don’t have that same mentality on offense. It’s because I was terrible on offense when I first started to play in high school. I couldn’t even make a layup in my freshman year. I didn’t become decent on offense in high school until my junior year.”

“Imani’s defense is instinctive. She thinks about her offense,” she said. “On defense she is completely prepared, knows exactly where she needs to be. … On offense, she’s thinking about where she should be, what shot should she use, does she turn over the right shoulder or the left shoulder, should she shoot a jumpshot or should she drive. … She knows, but doesn’t trust it yet.”

Boyette, who played her final game at the Erwin Center in Monday’s 73-55 second-round win over Missouri, honed her skills on Los Angeles hardcourts. She’s always been tall for her age; she was 6-5 in the seventh grade. Thompson remembers seeing Boyette play in high school.

Coming out of high school in 2012, Boyette was the third-ranked center prospect in the country and its 11th-ranked overall recruit.

Boyette was the third-ranked post recruit and 11th-ranked overall high school recruiting from the class of 2012, according to ESPN.com. McGee was a critical fan while watching her daughter play in high school, and has been to several Texas games at the Erwin Center and when the Horns have played in California.

Boyette’s mother, Pam McGee, also was an All-American at USC like Thompson was, and also won an Olympic gold medal while playing for Team USA in 1984. She said her daughter “has not even touched the surface” of her potential and “has the genetic ability to do more than I ever did.”

Thompson was asked to name something about Boyette that most fans don’t know.

“How did I know that you were going to say that,” said Boyette, seemingly annoyed.

“A lot of people don’t know that because she has a strong voice and very strong opinions,” Thompson said. “She’s adamant about the things she cares about and believes in. A lot of people know about her poetry. She looks confident in a crowded room, and you hear her voice. A lot of people can be intimidated by that.”

“I don’t like to put that out into the world about being sensitive, but apparently it’s a true statement,” she said. “I don’t like to broadcast my sensitivity. I’d rather have a strong, hard image.”

New vibes for Longhorns after 4-3 win over TCU