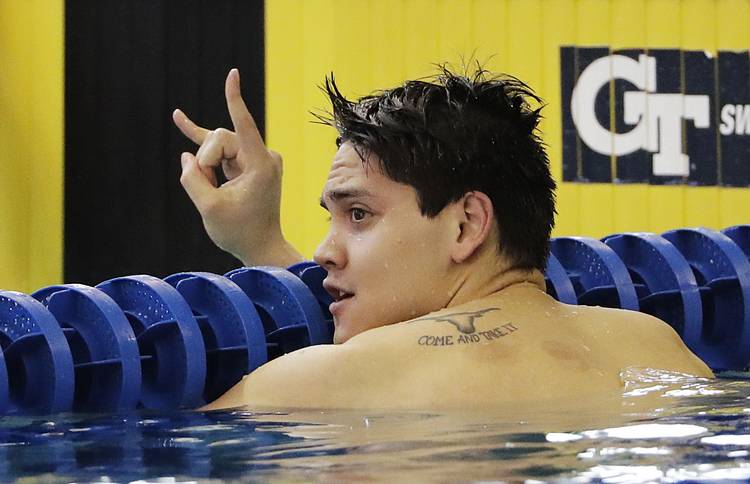 Texas swimmers Townley Haas and Joseph Schooling broke every record in the book at the NCAA championships Friday in the McAuley Aquatic Center at Georgia Tech, putting Texas solidly in the lead as it pursues a second consecutive national title.

“I didn’t know until I got out of the pool,” Haas said of his record-breaking time of one minute, 30.46 seconds in the 200-yard freestyle.

“There are a lot of people around the country that just decided they were going to practice harder (Saturday) morning because of what he did,” Texas head coach Eddie Reese said.

Like Haas, Schooling set the NCAA and American record in the 100-yard butterfly, finishing in 44.01 seconds and beating Florida star Caeleb Dressel, who placed second in 44.40 seconds. Dressel won the 50 free Thursday in 18.29 seconds, an NCAA championship record.

Haas, only a freshman, continues to help lead Texas.

“I was thinking, ‘We recruited him, and I wish we had him,’ ” Georgia coach Jack Bauerle said of Haas. “And then I was thinking I was pretty happy for him.”

Haas, considered one of the more versatile swimmers of the team, will compete in the 1,650 free Saturday. “He’s in the mile (Saturday), but his heart is in the 100 free,” said Reese.

Going into Saturday’s championship finals, Texas leads with 366 points. California and Florida follow with 271 and 255 points respectively. California was able to move from third to second Friday behind a stellar performance from standout Ryan Murphy. Murphy broke the NCAA and American records in the 100 backstroke in 43.49 seconds.

Texas has led all three days of the NCAA championships thanks to swimmers like Schooling and Haas. Texas was favored to win the team title coming into the championships. If Texas does win, another NCAA record will be set – Reese would be the only coach with 12 national championships.

“When we come into the meet, our goal is to win every day,” said Reese. “(Saturday) we start at zero. We want to outscore everybody.”

On Friday, another Texas swimmer, Jack Conger, finished third in the 100 fly in 44.87 seconds. Conger placed second last year in the 100 fly.

Licon also won the 200 breaststroke at last year’s NCAA championships. He will be swimming in that event Saturday.  Licon and Schooling joined John Shebat and John Murray on the Longhorns’ 200 medley relay team Friday, which claimed third place in 1:22.75.

Texas diver Mark Anderson placed sixth in the 3-meter springboard competition with a total of 416.10 points.