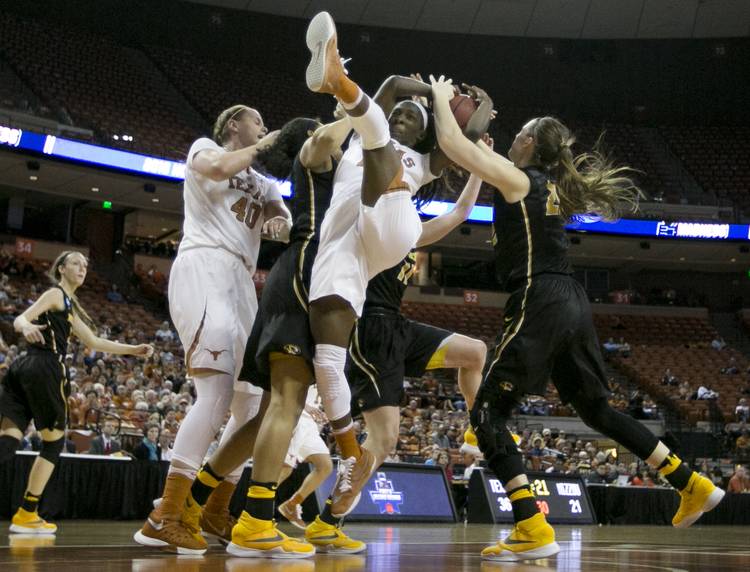 After Texas defeated Missouri on Monday to advance to the Sweet 16, Ariel Atkins and Lashann Higgs represented the Longhorns at the postgame news conference. With good reason, too, since they combined for 33 points, nine rebounds and five steals in a 73-55 victory in the second round of the NCAA women’s basketball tournament.

Atkins, a sophomore guard, had participated in such media sessions countless times during her two seasons at Texas. For Higgs, this was a rare occasion for news reporters to pose questions to the soft-spoken freshman.

The scene was another part of a season-long education for Higgs, a McDonald’s All-American last season at Cedar Ridge who has endured ups and downs while adjusting to the college game.

“I’ve prepared all year for that moment,” said Higgs, referring to her starring role against Missouri. “As for more playing time, I expect that I’ll have to earn it.”

Higgs should be among the first players off the bench when the second-seeded Longhorns (30-4) face third-seeded UCLA (26-8) on Saturday at the Bridgeport, Conn., regional. The winner will advance to play fifth-seeded Mississippi State or top-seeded Connecticut on Monday for a berth in the Final Four.

As the No. 7 overall girls recruit among ESPN’s top 100 seniors last season, Higgs knew she would face high expectations at Texas. There have some high points — 18 points against Tennessee, 15 against Baylor in Waco — but much of her first season has been spent sitting on the Longhorns bench, near head coach Karen Aston.

“There came a time I asked (the coaches) what I could do to earn more playing time,” Higgs said.

February brought the low point of her season. During a seven-game stretch from Feb. 6 to Feb. 27, she averaged two points and just three minutes per game.

The lessons appeared to take hold for Higgs during a 74-48 loss to Baylor on Feb. 29 in Waco. In an otherwise forgettable game for the Longhorns, Higgs played well, finishing with eight points in 13 minutes.

During the past six games, Higgs has blossomed coming off the bench, averaging 10 points while playing 15 minutes a contest. Aston said her confidence in her precocious point guard is beginning to build.

“For so long, when Lashann would make a mistake, she would just stop or get some down on herself; she couldn’t even go to the next drill,” Aston said. “In our game, if you don’t go to the next play, that could be the difference between winning and losing.”

The adopted daughter of Longhorns assistant coach George Washington, Higgs knew only three speeds when she arrived on campus this past summer — fast, faster and fastest. She occasionally made brilliant plays on the court, but too often she was out of control or reckless with the ball.

“I guess I wasn’t ready,” she said. “As time has gone on, I’ve learned more how to control my speed, picking and choosing when I should go fast and when I should slow it down.”

“I’ve seen some teams where their bench was an X-factor,” Aston said, “and our team is one of those. We’ve got people coming off the bench where we won’t lose anything once they’re on the floor, and mostly likely we gain something from them.”

For the season, Texas’ reserves have averaged 25.5 points a game, providing roughly 36 percent of the team’s offense. As for Higgs, she has contributed 6.8 points while playing 13 minute per game.

“I don’t feel like a freshman anymore,” Higgs said. “From where I started to where I am today, it’s been a process. When my number is called, I try to go out there and do what I’ve always done.”

Longhorns Class of 2016: Peyton Aucoin is no chicken when it comes to blocking