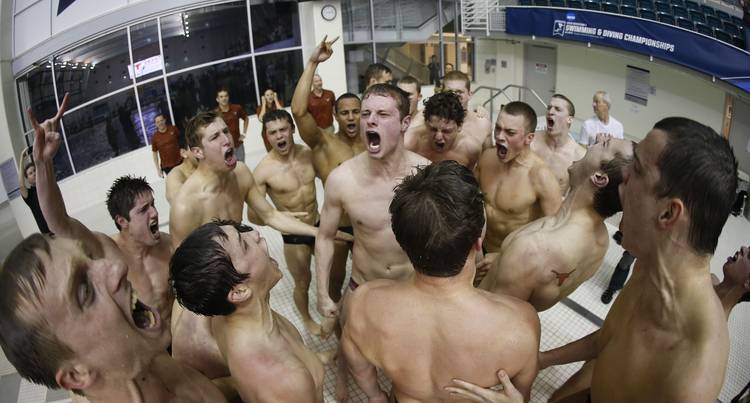 ATLANTA — Seemingly no records were safe at this year’s NCAA men’s swimming and diving championships — especially from Eddie Reese and his Texas Longhorns.

“I’m honored to break Mike Peppe’s record because I swam in his 11th win in 1962 at Ohio State,” Reese said.

Longhorns Will Licon and Joseph Schooling saved their best performances for the final night, as they crushed existing NCAA records while defending their titles in the 200-yard breaststroke and 200 butterfly, respectively. The latter race was of particular interest as Schooling edged out teammate Jack Conger in the final 50 yards en route to a blazing finishing time of one minute, 37.97 seconds.

The Longhorns would waste no time setting the tone of the competition, making history in the very first event. Finishing in 6:08.03, Texas shattered the NCAA record in the 800-yard freestyle relay Wednesday.

“This was a really special four days and especially a little different starting off with the 800 relay,” Licon said of the format change that moved the relay to Wednesday this year. “I think that really benefitted us.”

Freshman Townley Haas swam the second leg and posted the fastest 800 free relay split in NCAA history, clocking in at 1:30.52.

It was one of two record-breaking performances for Haas, as his winning time of 1:30.46 in the 200 free Friday is now the new NCAA standard.
Heading into the final day of competition, Texas had all but wrapped up the national title. However, California, which finished second, didn’t cede victory without a fight. Cal’s Ryan Murphy easily took first in the 200 backstroke with a time of 1:35.73, breaking the previous NCAA and American marks.

“David Durden is exceptionally smart, and he is a great thinker,” Reese said of Cal’s coach. “His team is one of the best fighting teams we’ve ever competed against.”

To anyone who has followed the NCAA men’s swimming and diving championships over the past six years, seeing Texas and California atop the standings is far from shocking.

Reese’s Longhorns and Durden’s Golden Bears have finished No. 1 and No. 2 six of the last seven years, with Michigan’s national championship in 2013 the exception. During that span, Texas and California have won three national titles apiece.

The top-ranked Longhorns qualified a meet-high 16 swimmers and three divers for this year’s NCAAs, a testament to the kind of program Reese has built since his arrival in Austin.

“When I started this sport, I never had plans of becoming an Olympic coach, never had a plan to win at NCAAs,” Reese said. “I just love to see people go fast.”

Texas aims to topple mighty UConn from its perch