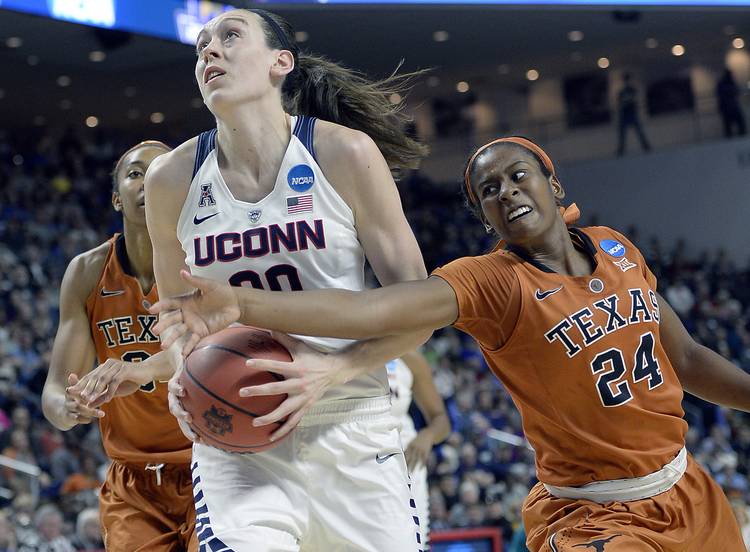 Texas Ariel Atkins, right, tries to grab the ball from Connecticuts Breanna Stewart during the second half of a college basketball game in the regional final of the women's NCAA Tournament, Monday, March 28, 2016, in Bridgeport, Conn. (AP Photo/Jessica Hill)

BRIDGEPORT, Conn. — Imani Boyette closed her final post-game news conference as a Longhorns basketball player showing pain in her eyes and fire in her heart.

Although few thought Texas had a chance to upset top-ranked Connecticut, Boyette said an 86-65 loss to the Huskies in the Elite Eight on Monday night was not in the Longhorns’ plans. Texas fell short of its goal Monday night at Webster Bank Arena, she said, while the unbeaten Huskies advanced to the Final Four and remained on course for a record fourth straight NCAA championship.

Considering Texas was on the wrong end of a 105-54 wipeout against UConn last season in the Sweet 16, the Horns showed vast improvement while ending this season with a 31-5 record. Furthermore, it was UT’s youth brigade — freshman Lashann Higgs (19 points) and sophomores Ariel Atkins (19) and Brooke McCarty (15) — who made the Huskies work for their 73rd straight victory.

“My babies carried the team tonight,” said Boyette, referring to the trio of underclassmen who combined for 53 of UT’s 65 points. “By no means am I satisfied losing by 21 instead of 51, but I’m proud of my teammates. I’m so excited to see what comes after this, but I’m frustrated we lost.”

UConn coach Geno Auriemma said the Longhorns pushed his team, something that didn’t happen when the Huskies blew past Mississippi State 98-38 Saturday in the Bridgeport Regional.

“We played a really good team that really tested us at both ends of the floor, and Texas forced our best players to play great,” he said.

“That’s exactly what you need at this time of the tournament. You don’t want to go into the Final Four thinking that games are going to be easy. And in spite of the score, this was by no means easy at all.”

This was not a matter of Texas catching UConn on a bad night. The Huskies shot 56.4 percent from the field and hit 12 of their 21 three-point attempts. Texas won the rebounding battle against the nation’s top ranked defensive team, 34-29.

“It’s a tough night for us,” she said. “We have lots of seniors, lots of tears, lots of people who didn’t want this to end. It’s a significantly different looking team and different locker room than when we played UConn in the last game last year.”

As expected, Stewart was voted as the regional’s most outstanding player. She was joined on the all-tournament team by Tuck and guard Moriah Jefferson (11 points, nine assists). Texas was represented by Higgs and Atkins.

The turning point Monday came after Higgs scored on an off-balance jumper to narrow UConn’s lead to 30-25 with six minutes to play in the first half. After UConn forced Texas into a shot-clock violation, the Huskies went on a 16-6 run to take a 46-31 lead at the halftime break.

Texas cut the margin to 54-42 early in the third quarter on a three-pointer by senior Empress Davenport, but the Horns drew no closer.

The loss to UConn marked the final game for four Longhorns seniors — Boyette, Celina Rodrigo, Davenport and Brady Sanders. All four plan to receive their diplomas in May.

With a strong nucleus of returners that will be combined with the nation’s No. 3-ranked recruiting class, Texas is growing closer to becoming one of the elite teams in women’s basketball, Aston said.

“We’ve got a lot of young players who want to be great,” she said. “I think they understand we’re still not there, but we’re really close. Really, really close, but we’re not quite there.”

How does Texas top back-to-back NCAA titles? How about a three-peat?

Who leads the Texas quarterback derby? Sterlin Gilbert: ‘Nobody’