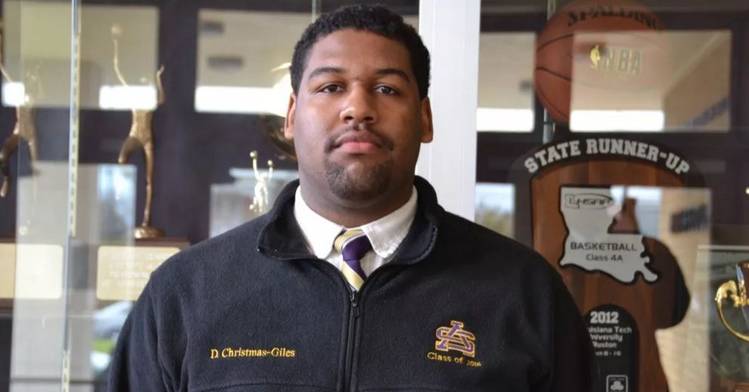 Three-star New Orleans defensive tackle D’Andre Christmas-Giles committed to Texas on the eve of signing day. He chose the Longhorns over LSU and TCU (photo courtesy of seccountry.com)

NEW ORLEANS — Those who know him say D’Andre Christmas-Giles has always looked advanced for his age.

In the seventh grade, he began shaving. Within two years, he could grow a full beard.

Yet, if you strip away the robust mustache he now keeps, you’re left with a typical 18-year-old who during recruiting had far more questions than he did answers.

Remember Charlie Strong’s signing day comments about Christmas-Giles? The Longhorns coach playfully noted that “it was eight questions every night with him.”

Christmas-Giles, a defensive tackle from St. Augustine — a prestigious all-male, all-African-American school in northern New Orleans — had a long list of inquiries: What jersey number could he could wear? How are practices structured? What does the team eat before games?

“He’s always been an inquisitive kid,” LaTonya Christmas said of her son. “He always wants to know what’s the next step. He’s always looking for answers.”

If plans go accordingly, Christmas-Giles (6-2, 292 pounds) will be giving the Longhorns answers on defense and develop into a run-stuffer they so desperately need after getting gashed up the middle in 2015. Five new tackles are arriving this summer, and Strong has made it known to his veterans that “help is on the way.”

Christmas-Giles’ profile is the 13th in our series highlighting the Longhorns Class of 2016. To catch up on the rest of the series, here’s an interactive map of Texas’ recruiting class of 2016.

On the eve of signing day, Christmas-Giles rebuffed LSU and TCU for Texas, becoming the fourth Louisiana player to join what would eventually become a 24-player class. Included is tight end Peyton Aucoin, who played for Brother Martin and last season knocked Christmas-Giles to his backside during a rivalry game against St. Augustine.

As for his question about what jersey number he’d wear, Christmas-Giles didn’t get the response he was hoping for because fellow DT signee Chris Daniels, of Euless Trinity, had already called dibs on No. 7 before Christmas-Giles could get to it. So instead, Christmas-Giles will wear No. 8. There is talk that another incoming defensive tackle, Jordan Elliott, of Houston Westside, will get No. 3.

Unlike most top players, Christmas-Giles’ recruitment didn’t pick up until his senior season. Due to an eligibility hold-up, he had to sit out all of his junior season at St. Augustine after he transferred from Salmen High in Slidell, La. He could practice, but he couldn’t play.

He made up for lost time, increasing his scholarship offers from maybe five to 20 by the start of his senior season with impressive showings during spring practices and in early-season games. In late August, Christmas-Giles committed to Tennessee, his first major offer, and remained pledged to the Volunteers until December when he took an official visit to Texas.

“Coaches were impressed with his size, his quickness, his power, and his attitude,” St. Augustine coach Al Jones said. “I guess when you’re around football players and you see a guy that size who can move and do the things he was doing, it just stands out.”

Christmas-Giles ended up having a fine year, recording 49 tackles, five sacks and three tackles for loss. Against Holy Cross, he even got a chance to return a short kickoff and rumbled maybe 15 yards. He also returned a fumble about 50 yards in that game before getting caught short of the end zone.

Jones didn’t become the coach at St. Augustine until Christmas-Giles’ senior season, but as the assistant principal he said he’d admired from afar the positive attitude Christmas-Giles maintained when he was sidelined for his junior year.

Texas ‘outplayed’ by Lamar in 4-2 loss