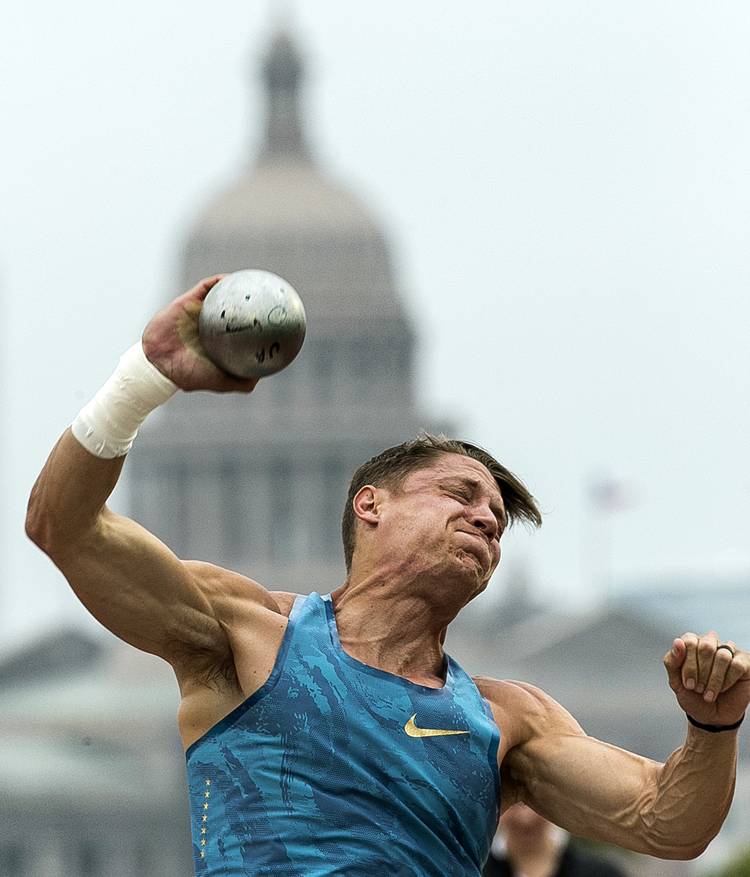 The last time Trey Hardee was injured during an Olympic year, he ended up rallying to win the silver medal in the decathlon at the London Games.

So one can rightly assume that Hardee, a past NCAA champion at Texas, is not all too concerned that with three months to go before the 2016 trials, he’s got a bum wheel.

Hardee, who dislocated his foot in January during a training injury, threw the shot put but participated in no other decathlon events Wednesday on the opening day of the Texas Relays. He won’t return for the final day of competition, either, so his appearance was effectively one-and-done.

That his third and final throw of 49 feet 1 3/4 inches ranked first in the 18-man field was rather insignificant to a greater importance. This stage wasn’t about results, but simply about Hardee getting his competitive juices flowing again.

“I needed to put on the uniform and compete,” Hardee said. “I had to feel the adrenaline. You can only practice so much. It takes a competitive environment and actual competition to really draw that out.”

Hardee’s training partner, Ingmar Vos, an Olympian from the Netherlands who trains at Texas, sits in second with 3,976 points — 60 points behind Stanford’s All-American Harrison Williams.

There’s no telling when Hardee will be up and running again, but he’ll probably try to participate in a full meet at some point to wear off any rust leading up to the trials in July in Eugene, Ore. There, he’ll be aiming to make his third Olympics, and even a decent score should be enough to hold off all comers save for 2012 Olympic champion and world record holder Ashton Eaton. If he can make the team, Hardee will buy himself another month or so to recuperate before he shuffles off to Rio.

The good news is Hardee has authored a blueprint for a situation like this. He underwent Tommy John surgery in the fall of 2011 and came back 10-plus months later to take the silver medal in London. He wasn’t at full-strength then, and there’s a chance he won’t be this time, either.

“Just another small, little hurdle that’s in the way,” he said. “For me, right now, it’s pain management.”

The latest injury occurred in January when the sole of Hardee’s shoe “was kind of staring at me in the face” after it got caught in the pole vault pit at the makeshift indoor facility in Moncrief. No ligaments were torn, luckily, or otherwise Hardee’s season — and his career, perhaps — would’ve been over. His rehab consists of running on an underwater treadmill and running on an anti-gravity treadmill. Various specialists are monitoring his progress.

“The next few weeks are going to be really important so he can get back sprinting,” UT coach Mario Sategna said. “Once he’s able to do that, we’ll be in the clear.”

Hardee, 32, knows he’s on the back end of his career, but he won’t commit to this being his final season. If one had to guess, he’ll probably compete through 2017 when his sponsorships with Red Bull and Nike are set to expire. He got married almost two years ago, and Hardee joked that he’s afraid if he retires, his wife will find things to occupy his time like taking out the couple’s two Rottweilers.

“Other than my foot, I’m healthy, and when I’m healthy I think I’m still one of the best in the world,” Hardee said.