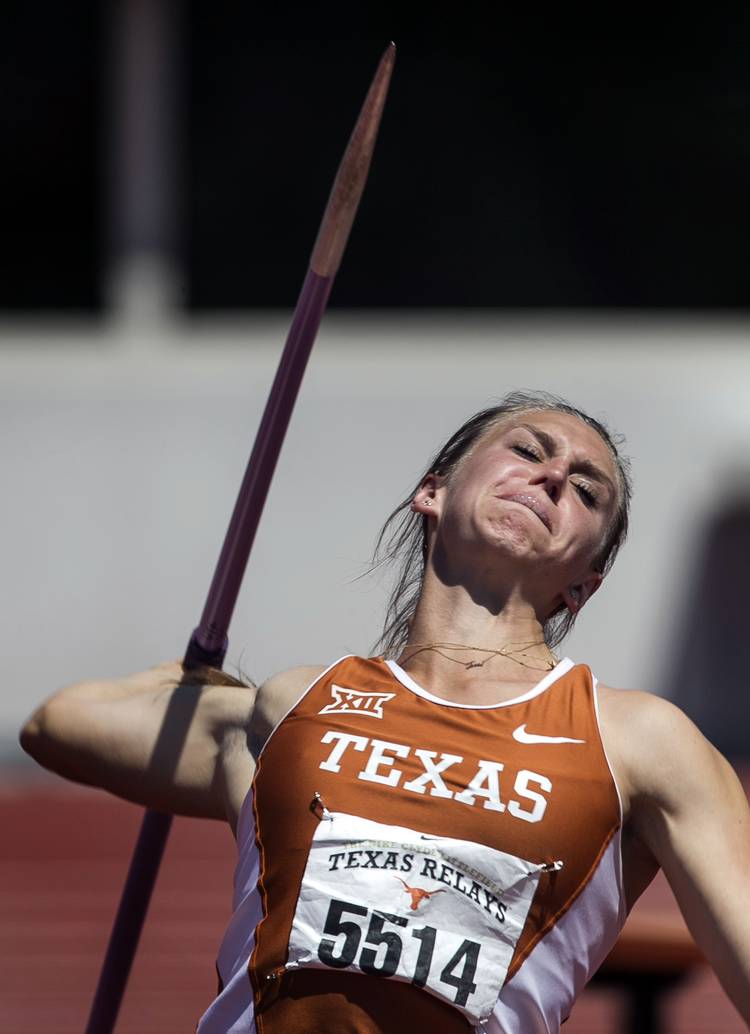 Texas' Ashtin Zamzow, throwing the javelin in a previous meet, led the NCAA heptathlon with one event to go. [AMERICAN-STATESMAN FILE]

One might think such an accomplishment would guilt her father into putting on a Longhorns ballcap.

Stacy, a former NCAA champion at Texas A&M, has come to grips with his daughter’s transfer from A&M last year, but he’ll gladly refrain from putting on anything burnt orange. On Thursday, he unapologetically wore an Aggies hat to Myers Stadium for Day 2 of the Texas Relays, where his daughter finished fourth among 31 competitors and rewrote the Longhorns’ record book with 5,829 points.

Dad had never been so proud of a Longhorns athlete.

“We love our daughter and love what the University of Texas has done for her, and she loves it,” Zamzow said. “We’re supporting her, but my wife and I are staunch Aggies. We told her when she came here, you love your school like we love our school.”

To begin college last year, Zamzow followed the family plan and attended A&M on a track and field scholarship. Her mother, Kalleen, was an All-American for the Aggies in the heptathlon. And Stacy was part of A&M’s 1,600 relay team that won the national title at the 1994 indoor championships. An uncle, Kendall Madden, twice collected All-American honors in the decathlon.

Short of naming the family dog Reveille, the Zamzows are about as Aggie as you get.

But after one year in College Station, Zamzow said she felt “something was missing” and sought a change to ignite her training. She rebounded at Texas, where her boyfriend of several years, Wolf Mahler, earned All-American honors in the multi-events at the 2015 indoor and outdoor national championships.

“I needed a coaching program that I thought fit best for me,” she said.

It was a daring move, but not only for family reasons. UT, which has long specialized in sprinting on the women’s side, has had little success historically in the heptathlon, evidenced by the ho-hum school record of 5,576 points set in 1989 by Natalie Lew. It took Zamzow just one meet to erase that mark with a score that will almost surely crack the nation’s top 24 and earn her a bid to the NCAA championships.

“I was definitely looking forward to coming to Texas and getting a lot better and breaking that record,” Zamzow said.

Zamzow set personal marks in all three events contested on Thursday — the long jump (18 feet, 9 3/4 inches), the 800 (2:20.86) and the javelin (166-02). She was the highest non-Arkansas finisher following the Razorbacks’ 1-2-3 punch of Taliyah Brooks, Payton Stumbaugh and Alex Gochenour.

Zamzow’s sister, Avery, a redshirt sophomore at Sam Houston State, finished 21st. There are six children in the family, and Zamzow’s brother, Colby, will compete for Goliad High School at Friday’s Relays.

“I knew she was capable of some things, but what she did today was amazing,” Avery said. “I look up to her a lot.”

Zamzow’s record can be viewed as a breakthrough for the UT program, which in the three seasons since Mario Sategna took over as coach has made increased efforts to improve the women’s multi-events by allocating more recruiting funds in that direction. Sategna, himself a NCAA All-American decathlete, was giddy after Zamzow broke the record and said “there’s always a special place in my heart for the multis.”

There is still work to be done. Sategna wants Zamzow to be peaking in time for nationals so she can score 6,000 points. He’d also like to convince her dad to change hats.

“I’ll tell him at the national championships he’s gotta be in burnt orange,” Sategna said.

In other events, UT’s Blake Scott finished second to Virginia Tech’s Brad Johnson in the pole vault section C. They were among four competitors to jump 17 feet, 5 inches. UT’s Nicholas Meaders was sixth at 16-7 1/4. In men’s decathlon, Stanford’s Harrison Williams edged Mexico’s Roman Garibay, 7842 to 7,446. UT’s Reese Thompson (7,136) was fourth. Ingmar Vos, an Olympian for the Netherlands who trains at UT, pulled out after eight events.