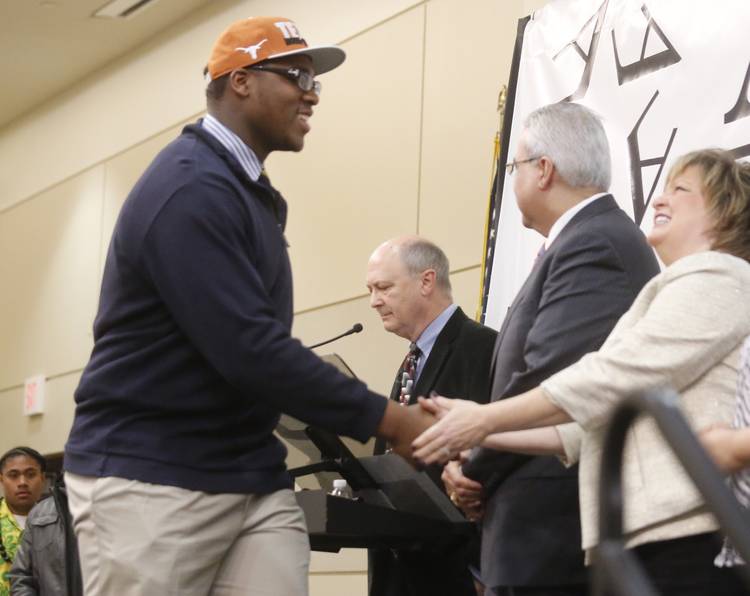 ARLINGTON — YouTube gives us unlimited cat videos, cooking demonstrations, police chases and “Gangnam Style.” All it takes is 20 seconds, and you can become a social media sensation, too.

Last March, Arlington Bowie players were toiling in the weight room when the biggest athlete in school walked up to coach Danny DeArman.

Tope Imade, Bowie’s mountain of an offensive lineman, wanted to break the school’s deadlift record of 505 pounds. So Imade starts off with 475, “and blows it up,” DeArman said. “Then he goes to 515. We made a big announcement and we got everyone’s attention.”

DeArman also pulled out his cellphone. Imade established a wide base, grabbed the bar and dozens of Bowie teammates shouted in disbelief. That video has had more than 177,000 views. Once it went viral, college recruiters started showing up on the South Arlington campus.

“His hand strength is ridiculous,” DeArman said. “But he’s not even tapped into his abilities. He’s not close.”

Imade said his first offer came from Texas State, then another from Tulane. Soon, offers from Texas Tech and Washington. And then former Texas offensive line coach Joe Wickline stopped by last May to see for himself. Once the Longhorns offered Imade a scholarship, he essentially dropped that 515-pound weight bar on other recruiters’ toes.

“I wanted to commit right then,” Imade said. “Everybody else was waiting, so I might as well just wait. Then my dad talked to me. He said, ‘What’s the point of waiting? Why waste other coaches’ time?’ So five days later, I committed to Texas.”

Imade’s profile is the 14th in our series highlighting the Longhorns Class of 2016. To catch up on the rest of the series, here’s an interactive map of Texas’ recruiting class of 2016.

Imade is a physical specimen any school would covet. He stands 6 feet, 4 inches tall and weighs 322 pounds. He aces the eyeball test. Perhaps most interesting about his development is that in middle school, he never really saw football as worthwhile.

“I thought football was a lot of running,” Imade said. “I didn’t know you can go to college for football. People said it could take you places, and I was like, ‘Yeah, whatever.’”

No, seriously. Imade didn’t even know what college athletic scholarships were until he learned about them in high school. Fortunately, DeArman was there to counsel him, and Bowie algebra teacher Jody Martin wasn’t shy about praising her alma mater in Austin. Yeah, OK, whatever.

Recruiting services were impressed, though. Imade was rated the nation’s 31st-best overall guard and 101st-best player in Texas, according to 247Sports. Bowie coaches gave him an overall grade of 86 for his senior year, with 81 pancake blocks. The offense averaged 32.7 points and 283.7 rushing yards per game.

Somehow, Bowie players learned of Cedar Hill’s scouting report before the game. Imade said defensive linemen were being told to target him. Yeah, sure, whatever.

“Find his weakness, do all this, do all that,” Imade said. “I still pancaked ‘em.”

In January, Texas coach Charlie Strong went to check on Imade himself. That’s when this all became real. “I was like, ‘You’re Coach Strong and you’re in my school.’ I was in awe, really,” Imade said. “He came here.”

Strong asked to see Imade’s brother, Seyi (pronounced Shay). Then, Imade said the coach had to meet some of his friends. Go get them, Strong said. Tope had to go find one more person — Martin.

“He worked so hard last year, and then to see him meet Charlie Strong, it’s was like his hard work paid off,” said Martin, who was happy to take cell phone photos. “As a teacher, that’s a really special moment.”

Can Imade make an immediate impact this fall at Texas? Frankly, that’s difficult to determine at this point. The offensive line needs depth. Returning starters Connor Williams and Patrick Vahe will be only sophomores. Freshman Zach Shackelford may win the starting job at center.

“If you are 300 pounds,” defensive coordinator Vance Bedford said, “you are going to play for us this next season coming in as true freshman.”

With all due respect to Imade’s raw talent, DeArman believes a redshirt season is best. He compares Imade to another Bowie graduate, Texas Tech’s Madison Akamnonu. He redshirted last season and could be the Red Raiders’ starting left tackle this season.

“I don’t think he gets on the field as a freshman, in my opinion,” DeArman said. “Once he kind of gets into the groove and gets comfortable and it becomes about going out there fighting on the field, it’ll click. But I think the best for him is to get a year under his belt.”

Strange as it sounds for a guy who can deadlift 515 pounds, Imade himself believes he needs to get stronger.

“I know people say I’m already strong, but I’m not Texas strong,” Imade said. “I’m not what they want me to be yet. Summer will play a huge role in that, and hopefully I’ll be ready to play by fall.”

Texas Relays: Morolake Akinosun has a new friend to challenge her in the 100